Blame it on Bollywood 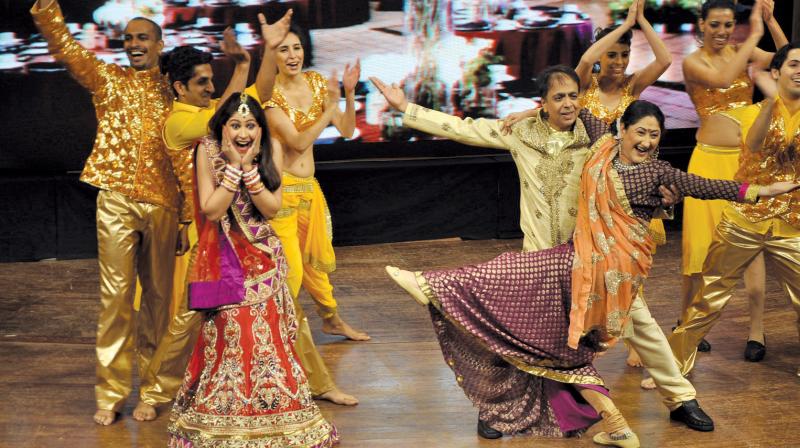 The Blame it on Yashraj cast in action.

Bharat Dabholkar is an excited man. As he prepares to stage his musical extravaganza, Blame it on Yashraj for the hundredth time, the ad-man and theatre personality believes that this play is as relevant today as it was four years ago, thanks to India’s obsession with the big-fat wedding.

“I always knew it would work,” he tells us, as he talks about his pet project, which showcases the story of a wedding put together for a Punjabi-Bengali girl, who’s marrying a Muslim boy. “It’s not a normal play that has a story of some sort. I felt it was a burning topic, people getting married in a big way. In fact, I read a newspaper article years and years ago, which said people have stopped having weddings in the simple community sort of way. They all want bigger, five-or-six day weddings like they see in Bollywood. The whole thing of choreographed sangeets, the whole family dancing to Hindi songs, cocktails and mehendi, didn’t happen earlier. Maharashtrian weddings would be a simple one-day affair; we called people for weddings, gave them ice cream and they left!”

With a throaty laugh, he adds, “With things like sangeet and bigger weddings it starts off somewhere and quickly turns into the thing of keeping up with the Joneses. If somebody spends so much money, somebody else wants to spend more.”

In cases like these, Bharat believes that it’s always the case of real life imitating reel life instead of the other way round. “Whether it’s fashion or social behaviour, Bollywood influences everything. You see your favourite stars doing certain kind of things, wearing certain clothes, that influences people to behave in a certain way; Bollywood is instrumental in everything.”

As he looks back at the multiple venues across many countries Blame it… has gone to, Bharat reveals that he’s had one of the most interesting experiences in South Africa. “We did an experiment in South Africa. We auditioned about a 100 local performers and they picked up all the dances and even started mouthing the words in an hour’s time. We selected 30 of them and got costumes made for them. We had 10 shows back-to-back, with Indian actors and South African dancers.”

In fact, one of the shows even had some of the audience members joining the cast on stage for a jig. “Jayati (Bhatia) who plays the girl’s mother on the show said to the audience it’s my daughter’s wedding and everyone’s having a good time. And she said ‘I want you all to participate. I’ll teach you two basic steps and you need to dance along.’ We played some 10 minutes of music and we had the audiences coming on to the stage and dancing, some danced in the aisles and the balcony. Finally we had to stop, despite the fact that everyone was having a good time,” he reminisces.

As far as musicals go, Bharat believes that Indian musicals have a greater chance of hitting a chord with the audiences. “English musicals in India have a limited audience and they do pre-existing musicals like My Fair Lady, or Sound of Music,” he explains. “However, P.L. Deshpande’s Threepenny Opera in Marathi or Vijay Tendulkar’s Ghashiram Kotwal worked very well. Indians relate to home-grown content.”

Now, Bharat hopes to take Blame it… to more destinations abroad. “We’re a team and we’re great friends. We don’t mind going anywhere with the play!” he signs off.