Why should guys have all the fun? 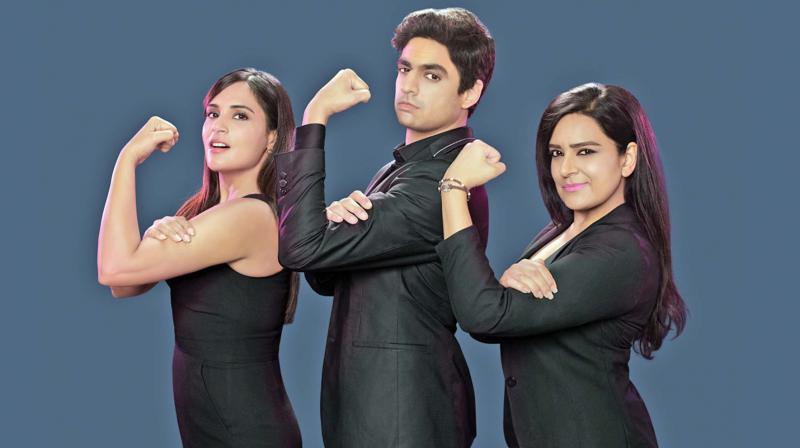 In recent years, the comedy business has seen significant growth. Stand-up comedians are now celebs, and their opinions are weighed in by the society at large. However, the number of women, like in many fields, is lower than that of men. But a new comedy reality show by TLC, the popular lifestyle channel, is all set to change that! Titled Queens Of Comedy, this upcoming comedy reality show, will have only female comedians competing with both known and upcoming fellow comics to win the competition. All India Bakchod fame Rohan Joshi, actress Richa Chadda, and popular stand-up comedian Kaneez Surka will be the judges of the show, while Varun Thakur of Struggling Actor Vicky Malhotra fame will be hosting the show.

In an interview with DC, Rohan, Kaneez, and Zulfia Waris, Business Head of Female & Family Entertainment Products, Discovery Communications India, open up about the show. Talking about how the idea for the first all-female comedy show came about, Zulfia says, “We wanted to introduce a concept which was brand-new. We realised that comedy is really big now — but since it is predominantly done by men, we don’t get many women walking into the industry. That’s where the one-liner for the show came from.”

When asked how difficult it is to judge a comedy and how the two comedians are going to go about it, Kaneez asserts, “I realise there are different notions for everyone about what comedy is. So, rather than judging, I would like to encourage the comedians and find out what their style is and how it can develop through this show. So, it is not about cutting anyone down.”

Rohan says, “Beyond a point, when it comes to judging comedy, I don’t want to intellectualise it too much because it comes down to one thing — can the contestant make me laugh? So, the idea is to find if the person is capable of making everyone crack open, and it is not difficult to find.”

Adding to that, Rohan says, “The ratio of male and female audiences  towards comedy is skewed because of the relatability factor. Bollywood movie audiences are predominantly men because the directors are men, the crew, and everything is predominantly done by men. So, I am not surprised if the female viewership for comedy is lower than that of men. But I think more women will watch this show — because finally you have somebody who is talking to you in your own voice!”