Ode to her father

In a candid conversation, Shabana Azmi talks about Kaifinama, her illustrious father’s life and working with ace director StevenSpielberg. 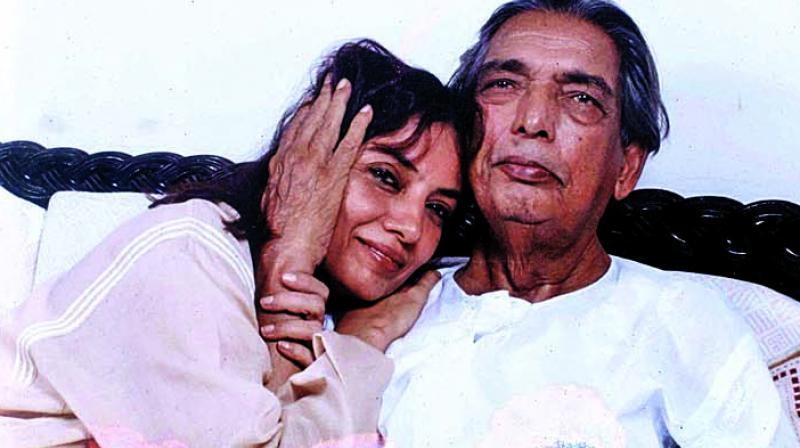 Shabana Azmi has been considered synonymous with parallel cinema ever since she made her debut with the film Ankur in 1974. Her path-breaking performances have earned her multiple awards, including five National awards and several Filmfare awards, civilian awards such as Padma Shri, Padma Bhushan, and even a seat at the Rajya Sabha. This dexterity, perhaps, comes from her father and renowned poet Sayyid Akhtar Hussain Rizvi, better known as Kaifi Azmi. At the age of 67, the actress not only has stood strong on her film choices, but has also paved the way for transition and transformation of women through her work of art. “He was my friend, guru, and father. He was somebody with whom I had a very satisfying relationship; he was very supportive of my choices. I was very young when I told him that I want to do acting seriously, and he said, ‘I will support you in whatever that you decide. Tomorrow, if you decide to be a cobbler, I will support you in that also, provided you tell yourself that you will be the best cobbler in the business’. That’s the kind of support I received from him. And that keeps me going,” reminisces Shabana as she settles herself on a couch just after the screening of the film Kaifinama: A Celebration of the Art and Times of Kaifi Azmi at the Jio MAMI Film Festival.

Produced by Azmi’s Mijwan Welfare Society, Kaifinama is directed by Sumantra Ghosal to celebrate the birth centenary of the poet. The film left Azmi teary eyed. Tracing his roots from the small town named Mijwan where he was born, his commitment to socialism, and his extensive body of work, Kaifi’s journey is documented through several interviews with Azmi and her brother Baba Azmi, along with his wife Shaukat Kaifi.

“There are a lot of small documentaries made on him, but those are largely about certain aspects of his life and I wanted to make a very definitive film on him,” shares the actress, adding that she was kept away from any glimpse of the film. “The whole thing came to me fresh from the mint when I saw it for the first time,” she reveals. But the actress numbs when she shares that she learned new things about her father, such as his role in the Communist party. “Although there are indications and I know what he felt for the party, but that was the backbone of this man which I have learned with this film,” she reveals.

Having been raised in the atmosphere of poetry and being married to a poet herself, Azmi’s love for Urdu poetry is indestructible. When asked if she writes poetry herself, she quips, “I provide inspiration.”

In a time where Urdu as a language and poetry is losing its charm among millennials, Azmi believes that these kinds of films can celebrate the ideology and time when Kaifi, Majrooh Sultanpuri, Shailendra Singh, Jan Nisar Akhtar used art as a tool to create social change. “We need to remind ourselves of the ideologies of those times, and the kind of people they were. Today, everything is catering to the market and they are dictating everything, so by visiting such figures,we are celebrating the time and their thoughts,” she explains.

In her five-decade-long career, the actress has done both arthouse and mainstream films, beside her stage productions. Her films like Arth, Paar, Bazaar, Nishant, Sparsh, and most recent Deepa Mehta’s Fire have been the milestones of her career. She also ventured into mainstream films like Parvarish, Amar Akbar Anthony, and Avtaar among many others very successfully. However, she finds that cinema has changed completely. “We are looking for real-life stories in content, and a lot of biographical films are being made. I don’t know how long the trend will last, but I like watching these films. We have more liberty in filmmaking and there is a good content coming up,” expresses the actor.

On the work front, Azmi will be heading abroad this week for her Showtime series Halo with American filmmaker Steven Spielberg. In the series, Azmi will be seen playing Admiral Margaret Parangosky, the head of the Office of Naval Intelligence. “I am excited and scared. There are a lot of preparations going on, but what is very nice is that Asian actors have been saying for a long time that we need to have colour-blind casting, and why the best roles go to Caucasians but see I am in the film. I am excited to play the character of an Admiral who is very strict and almost bordering on being wicked. It’s so different for me. See, I am such a sweet little girl,” she concludes with a laugh.