When the clock strikes hour of horror

The Tamil horror film by a debut director is short, but long enough to scare you. 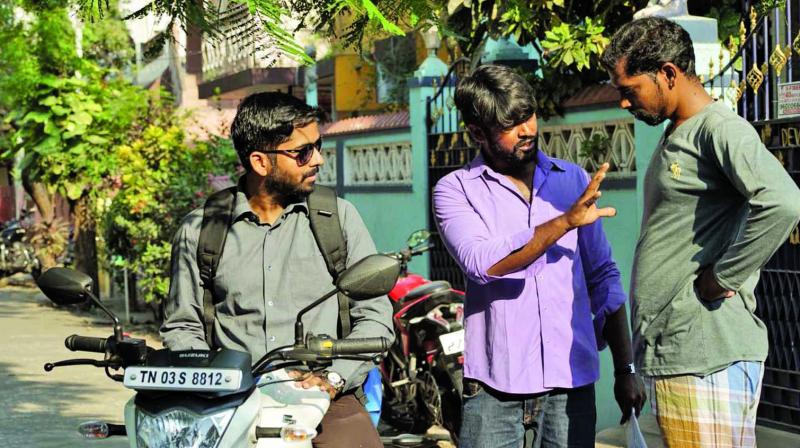 Lead Characters and Director Nandha Kumar at the center.

There were a short series of semi-scary snaps which came out as the brainchild of the debut director Nandha Kumar, an engineering graduate, who allowed himself to go after his passion of movie making.

The story is about three friends   — Nandha (lead character), Nagendran and Raja. Once when Nandha finds a smartphone on the road by his house, he picks it up and takes it home. While it looks like a battery-dead phone to Nandha, it used to come alive suddenly at 7:30 p.m. of its own volition. This triggers paranormal activities that go on through the night. The other two friends do not realise it in the beginning and keep cracking jokes. But, after experiencing it, they become equally clueless about everything that happened at that particular time.

According to the scriptwriter, legends from Hindu mythology tell us that seven and half is considered inauspicious and here, when the clock strikes 7:30, the devil seeks to begin its show.

The visceral thrill was almost gone when the flashback story kicks in. Several attempts by the hero to get rid of that wretched phone are in vain until it reached the hands of the ultimate riddle — betrayal or death!  Eventually, the phone was left by the roadside by the villainous V.G. and Ranga who murdered an honest man in Srini a couple of days before at that exact time and snatched the phone for making a little money. The more realistic explanation finally emerges from the director’s psyche.

Brought up in Chennai since his childhood, Nandha was enthusiastic about doing something in the film industry but never got a chance because of the family compulsions. “7:30 PM is the first step ever towards my dream, because I wanted to make at least one film before I die,” said the young director after the official launch of the flick.

The Tamil producer Parivu Sakthivel, director and writer S.S.Stanley and ‘Cable’ Shankar graced the launch event. The cast and crew, all from his circle of friends or professional technicians were the support group of the director. The film is coming up online (to be available on YouTube and other websites) shortly.