A group of six-girls are slaying the floor — virtual and real — with their jazz performances and aim at preserving this dance form. 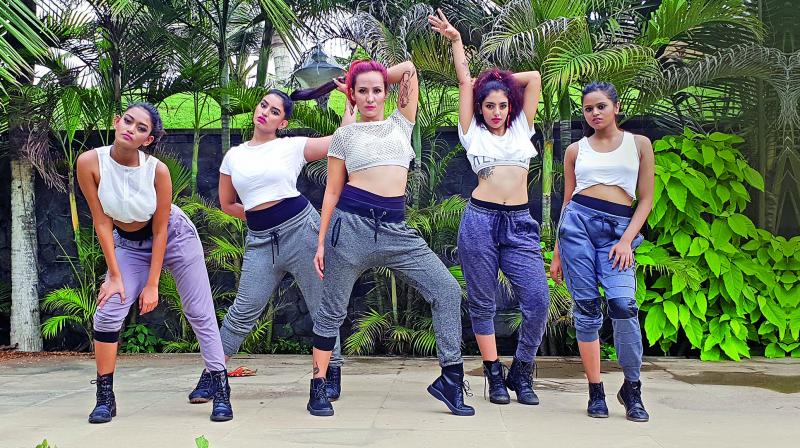 The undying love for jazz and the burning desire to bring this dance form back on the map brought these six girls together. While the aim behind the union was to be part of a television reality show, a realisation soon hit the gang. “We were not a reality show material. We didn’t have a sob story,” laughs Svetana Kanwar, the founder.

Started in 2016, the ‘Bom Squad’ features Radhika Mayadev, Roshini Nair, Vedika Agarwal, Diksha Bharti, and Riya Sood along with Svetana. From doing stage shows, YouTube videos to commercial dance videos the group dabbles in all. “We figured social media is more suitable for us as a platform. We started making a lot of digital music videos as these are the people with whom we connect and they connect with us,” explains the 30-year-old founder.

The squad recently slayed the audience at the Sunburn Festival, Pune. Svetana who is training Ananya Birla, daughter of industrialist Kumar Mangalam Birla, called the squad to back the singer during her performance.

“We backed Ananya for her performance...we were more like an extension of her. The ground was over-flowing with people watching us. It was 15 minutes of living any dancer’s dream,” smiles Radhika, one of the oldest and popular members.

While the dance was the primary reason for this sisterhood, it was the lack of training in the field that held them tight. Hence, one of the aim objects of the squad is to promote and preserve jazz as a dance form in India. “When we took up dancing we realised that training was not given enough importance. We didn’t want to lose our training either. So, we came together and made videos in our efforts to ensure our training is not lost,” adds Svetana. Hence, the crew makes it a point to get together twice a week for three hours of technical training, .

In the gang of six strong-headed high-energy women, whoever shines takes the centre stage. “Radhika and I handle things for the crew. She is the injured one and keeps hurting herself. Right now she is recovering from an injury. Vedika and Diksha have been with us for a year now. The youngest and the newest member is Riya, she has been with us for four months. There is no leader. Whoever is choreographing and doing a good job will go ahead and take charge of the piece,” she asserts.

In an effort to introduce people to jazz and make them familiar with the dance form, the group forayed into commercial choreography. “We like to give the audience what they want so that they get to know the dance form first, then only would we be able to acquaint them with authentic jazz,” quips Svetana.

Though there has been an increase in the number of people opting for Jazz, the professionals believe that the audience is still at the nascent stage of accpeting the various international dance forms. “There is an amazing increase but I get messages saying it is so hard and I can’t split. We make the choreography hard but that is the point of it, to learn something new. It is a dance form where you have to challenge yourself,” she says.

While all is good, Radhika hopes to see more men in the dance room. “Once men understand jazz is not only for women, 60 per cent of the battle will be won. At present, 99 per cent of our students comprises women, it is no less than a moment of joy for us when we see a boy or a man learning this dance form. Awareness is important for this style of dance,” concludes Radhika.