My wife is my stress buster, says Chiranjeevi

Chiranjeevi tells us how he believes stardom is like a passing cloud. 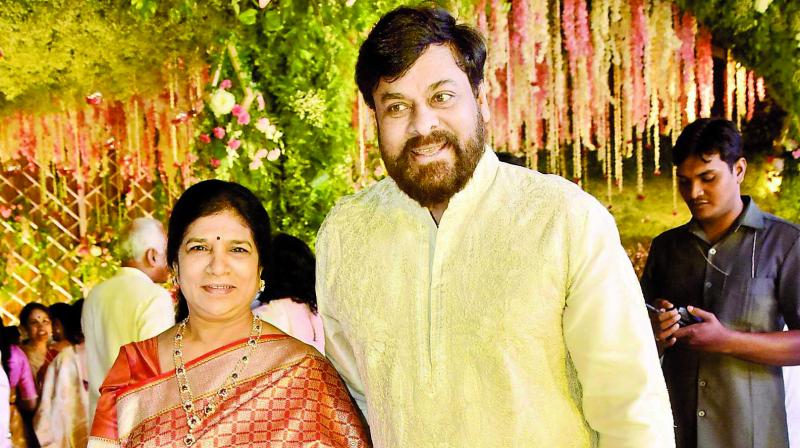 Chiranjeevi with his wife Surekha

Fresh from Sye Raa Narasimha Reddy’s success, Chiranjeevi talks about what stardom means to him, and how blessed he is to have an understanding, and grounded wife.

Chiranjeevi is basking in the glory that his latest film Sye Raa Narasimha Reddy has brought to the box office. But the glitter of the blockbuster doesn’t affect the actor, he’s very humble.

The megastar explains what stardom really means to him and how he believes one should handle it. “Stardom is a sugar-coated aura, which is not permanent or everlasting. It comes with an expiry date,” says the actor, adding, “You’ll be remembered by the characters you’ve played and not through your charisma.”

To explain his point better, the megastar talks about the late actor Rajesh Khanna. “Remember how people used to die for Rajesh Khanna? What happened after that?”

“We all remember reading about how that huge star’s end phase was. Only his characters will be remembered,” he reiterates.

Breaking down stardom
Chiranjeevi tells us how he believes stardom is like a passing cloud. “Use it to fuel your best in terms of the characters you need to justify when you portray them. And, surely, use the stardom as an encouragement,” counsels Chirajeevi.

Clearly, here’s a man who has understood that the secret to happiness is to make stardom work for him and not the other way round. “After I leave my sets and get home, I forget everything,” he elaborates, adding, “And no matter how well off we are today and no matter how rich my abode may seem you’ll find all my family members and relatives bonding with each other, eating and behaving like well-cultured people. At home, one would observe what’s called a ‘middle-class atmosphere’, and we thrive in it because it keeps each one of us grounded, with a love and bonding that is permanent.”

The super human in his life
But the megastar has an opinion about the kind of ‘super human’ films made in our industry. Did he mean superheroes, we wonder, because those are made in Hollywood also. “I think it all depends on the how you convince the audience and add to the adrenaline rush. Sometimes, you have to do away with logic but not to the extent of showing buffoonery or being illogical. I mean, Superman doing the kind of stunts he does is believable because his character is that of a superhuman. And so also about Hrithik Roshan in a movie such as Krrish. But if someone shoots a bullet and I try to catch it between my teeth,well, now that would be comparable to the heights of buffoonery,” he says laughing. But amidst the talks of super humans and relatable stunts, the megastar is certain about one superwoman he knows, his wife. “I am as tranquil and happy as I am because Surekha, my wife, takes complete charge of my home. It lets me concentrate on my fitness mantra and my daily routine with my grandchildren. In fact, I believe I don’t take any stress because my wife handles it all for me. She is my stress buster,” he says.