Proposed by Prime Minister Narendra Modi, the movement got a lot of supporters across the board. 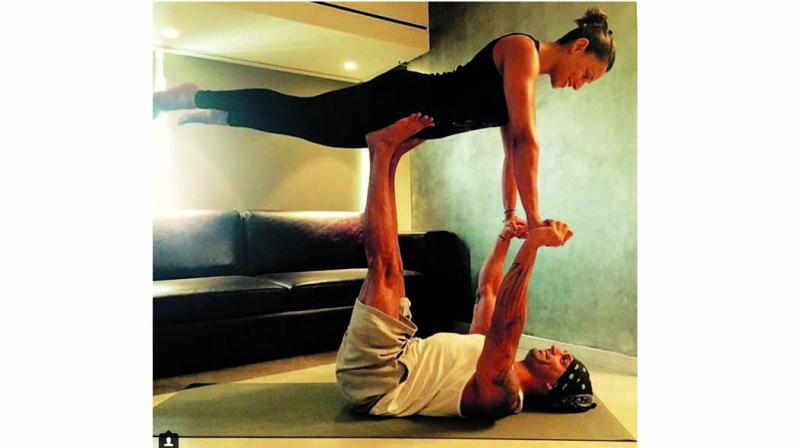 Bipasha Basu, who is a known fitness freak, says that while doing yoga alone is great, doing it together increases bonding, especially between a couple.

It’s that time of the year when most exercise savvy folks are getting their yoga mats and outfits ready for events across town. Yes, International Yoga Day is upon us once again. Proposed by Prime Minister Narendra Modi, the movement got a lot of supporters across the board. Last time round, a whole bunch of B-town celebs including Malaika Arora Khan, Shilpa Shetty, Bipasha Basu and Jacqueline Fernandez had shown enthusiastic support for the movement. Now, a year from when the initiative kick-started, these divas are just as dedicated to their art as they were a year ago.

“Yoga for me is part of our culture we have so much of knowledge from teachers, books about yoga and I think people should incorporate this into their lives,” says Ayesha Takia, who confesses that she is a regular at the gym. “I really lean on yoga when I’m working out. It’s part of our culture and we should practice it more. People in West follow this and I feel that since we have so much access to it we should take advantage. It not only works on your body but also works on your mind,” she adds.

Bipasha Basu, who is a known fitness freak, says that while doing yoga alone is great, doing it together increases bonding, especially between a couple. “Yoga traditionally is an individual practice but as a couple when you do it together, it strengthens the relationship. You have to pay attention to each other in the moment and work towards common goals. It increases communication and trust between partners, brings them even closer.”

Srivdevi, whose film Mom is about to release, also admits that yoga has always been a source of comfort for her. “I do power yoga and my trainer Manish Tiwari has been training me for last 14 years. Yoga has a huge impact in my life,” she concludes.