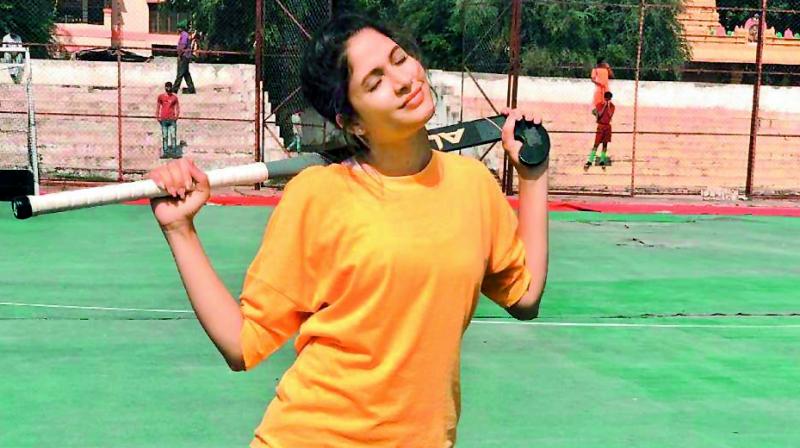 Lavanya posing at the hockey practice

Lavanya Tripathi has been shuttling between Chennai and Hyderabad. She is busy with shoot in the nights in Chennai and hockey coaching in the morning in Hyderabad for a role in her upcoming movie A1 Express.

“I like sports and play badminton and cricket. Though hockey is our national game, it is rarely played in schools and colleges, so I didn’t know much about it,” the actress explained. “There are scenes in the movie where I have to play hockey. So, I wanted to learn how to play it. My role is very interesting and I want to put in extra effort”, she added.

“It is a night shoot in Chennai,” the actress said. “I had to catch an early morning flight to Hyderabad for the hockey training, which lasts a few hours. Then shooting for the film would start,” she said, giving  an idea of her day. She had to leave for Chennai immediately afterwards to be in time for the night shoot there. “I would get only a couple of hours of sleep,” she said, and added, “But I enjoyed the process and I didn’t feel any stress.” The actress revealed that she looks like a tomboy in A1 Express. “I ride an RX 100 bike. I play hockey and I don’t wear much make-up as I need to look like an average hockey player,” she said.

Lavanya has signed another Telugu film, Chaavu Kaburu Challaga, opposite Karthikeya. “It’s another interesting role, but I cannot disclose more,” she says. Shooting for the film will begin next month.