A psychological drama that burns slowly, it unnerves the viewer... 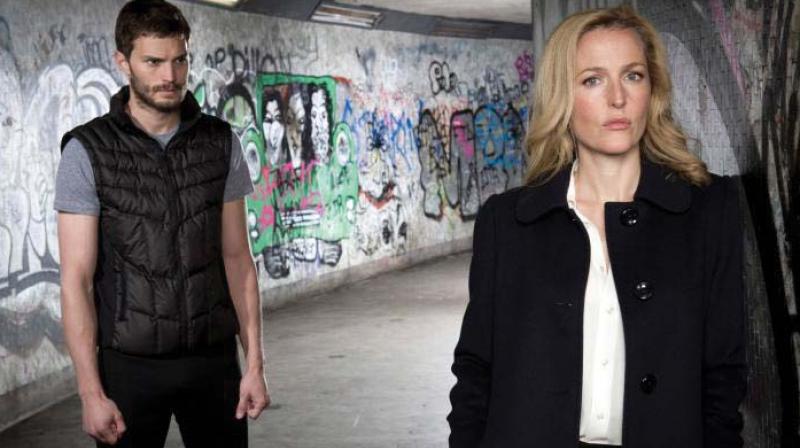 Slow burning, the serial killer’s almost ordinary life and his nocturnal adventures will grip you... even make you curious about how he goes about his macabre killing sprees.

The Fall
STAR RATING:  3.5/5
MUST-WATCH: It’s interesting to delve into the mind of a serial killer, into the workings of a jaded and cynical detective.

Scully is back. The Gillian Anderson of X Files has matured, and  aged gracefully. And in this series, she tiptoes on the screen with her signature high heels, and preppy executive wear with a turmoil and anguish hidden under the surface of an icy demeanour. Her emotionally disconnected portrayal as Stella Gibson in The Fall deserves a watch.

As shows go, this is not that edge-of-the-seat banger, but interesting enough. The British-Irish crime drama was filmed and set in Northern Ireland, and has been created and written by Allan Cubitt. Gibson apart, Jamie Dornan as serial killer Paul Spector is fantastic.

The gripping portrayal of Jamie Dornan sends a chill down the spine. And even as you finish the 16 episodes on Netflix… remnants of this pretty boy and his deeply twisted and macabre self haunt the viewer. It’s hard to imagine a good-looking bearded bloke with two children in such a cruel and ghastly light… and the psychological mullings that are replete with spoiler alerts (such is the story line)… makes for a slow watch. So, in that, it’s a bit unthrilling as a crime story. But the layers of deep-seated angst come face to face with protagonist Detective Stella Gibson’s personal demons. She is good, yet the show seems a bit contrived sometimes. Also, it’s hard to imagine a detective that is so aloof in her personal life, going from one-night stand to one night stand, who tears up every time she comes face to face with human tragedy.

Slow burning, the serial killer’s almost ordinary life and his nocturnal adventures will grip you... even make you curious about how he goes about his macabre killing sprees. His young dark-haired victims… are bathed, cleaned up and placed in an impressionist painting-like set up… and then he proceeds to take photographs, in a perverse sense of preserving their beauty while strangling the life out of them.

There is a scene in the final few episodes where Dornan, now being counselled in a psychiatric facility, is speaking to a crime psychiatrist who is analysing whether he is fit for testimony at a trial… and the psychiatrist explores Dornan early life of abuse at the hands of a priest, his mother’s suicide and his carnal urges and cruel temperament. He advises Dorman that sometimes you might feel a lot of things, but instead of acting or reacting on those thoughts that continue to run riot, it would be wiser to just observe them till the urge passes. The twist to the tale comes in the form of an accidental shooting that nearly kills Dorman, and it then emerges that he has amnesia of the ghastly murders.

As psychological dramas go, watch it… as the thrill is replaced by the meanderings of a serial killer, and the haughty temperament of the detective… it’s predictable and Gibson herself hides under a character sketch that becomes old and contemptuous too soon. The Police Chief is besotted by her, and is a weak, prone-to-drinking fellow, almost to the point of being ludicrous. One expected more soul from Gibson who dresses the same with her all-knowing demeanour. An earlier review stated about the show, “It continued to raise questions about misogyny, madness, and obsession. Then it forgot to answer them!” That might be just about right. One expected more from Anderson. On the other hand, Dornan, phew! What a performance, he enters the psyche of the viewer, leaving one feeling sorry, well almost.