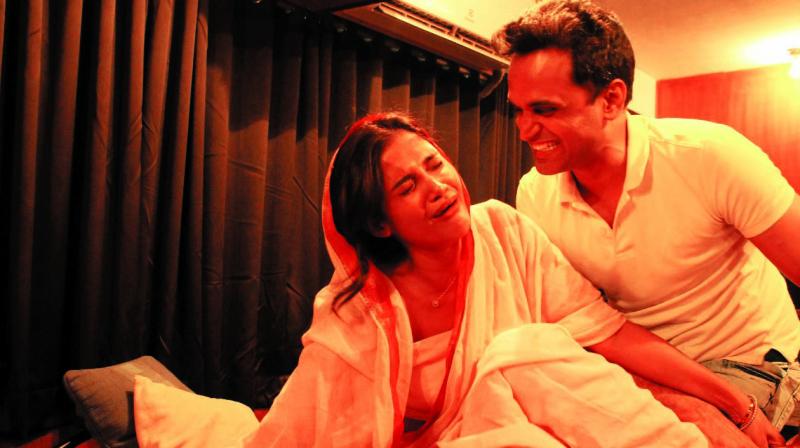 A still from the play

When Vijay Tendulkar’s controversial play Sakharam Binder hit theatres in 1972, it drew gasps and ruffled feathers. Subsequently, the play was slapped with cuts that almost mutilated the play and was even banned at one point; the reason for this moral policing — the play’s eponymous character’s actions, which belie blatant disregard for convention or prudish societal norms. And now, veteran theatre artiste Ashok Pandey has re-imagined the play in a contemporary setting. Yet, the play is as jarring, honest and disturbing as its 1970s version.

Sakharam Binder tells the tale of Sakharam, a man of meagre means who refuses to bow down to, or be shaped by, social mores and customs. And so, the unmarried Sakharam openly engages in live-in relationships with women (first, the mild-mannered Lakshmi and later, the vibrant Champa) who’ve been cast away by their husbands. These ‘fallen’ women are brought home, given life’s basic necessities, and in exchange, are expected to perform ‘wifely’ duties, like looking after household chores and fulfilling his sexual needs. But if the arrangement doesn’t work out, either party is free to leave. Because Sakharam is forthcoming about his diktats and chooses to help society’s disgraced women, he considers himself to be an honest, fair-minded man. But the reality is quite different; Sakharam is a tyrant within the four walls of his house. He physically and sexually abuses the women and treats them like slaves. It is this volatility, coupled with a maverick streak that makes Sakharam one of Vijay Tendulkar’s most memorable characters. 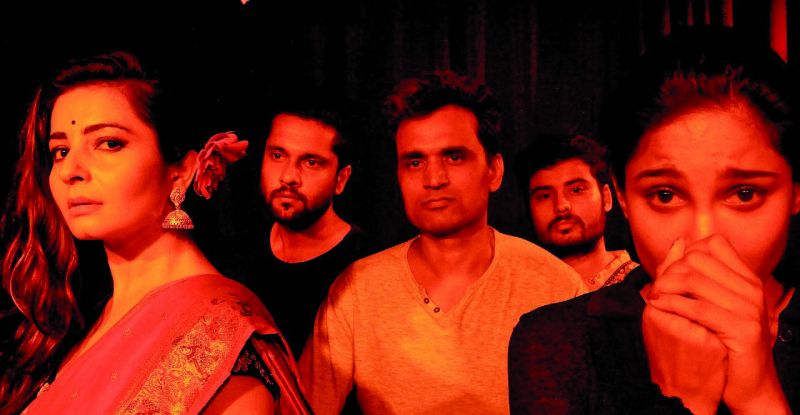 The five key characters of the play

But Ashok’s Sakharam is markedly different. The director has consciously avoided portraying him as a despot, and with good reason. “For me, Sakharam was never the hero of the play. He is not a powerful man, but an emotional one. He is one of the least complex characters in the play. I didn’t want to make him seem larger than life because, in reality, it is the men who seem like mice in the outside world that turn into real monsters once they go home. So I wanted Sakharam to be an ‘everyman’, the kind of man you see even today in society,” shares Ashok. So in Ashok’s play, it is the women who drive the play. Even the meek and God-fearing Lakshmi is presented as a shrewd woman, who knows how to strike when the iron is hot. “For me, Champa and Lakshmi were the heroes of the play. They both exert control over Sakharam in ways he does not realise,” avers the director. Ashok has also introduced tweaks to make the play feel relevant to today’s audience. “In my play, Sakharam meets women through Tinder, rather than finding them on the street. I wanted to depict the complexities of today’s relationships and how difficult it is to find true love,” adds Ashok.

However, Ashok’s Sakharam Binder stays faithful to the various themes the original play explores. The play offers a commentary on class, society’s discomfort with taboo topics like sex, the role and relevance of the institution of marriage, the nature of live-in relationships and gender inequality. “Though this play was written in the 1970s, a lot of what is depicted in the play still happens today. Even today, women are abused, they do not have the freedom they deserve, they are expected to adhere to biased societal standards. So, not much has changed. When change happens, it is usually driven by the lower class, by the people who have nothing to lose – like a man like Sakharam Binder,” explains Ashok.

So, throughout the play, we are presented with moments that force us to re-look at our own thoughts and behaviour patterns and to critically examine all that’s happening around us. But the end of the play is especially poignant; “If I had to ascribe metaphors to the characters, Sakharam would be the mind, Lakshmi, the imagination (because she is the ‘ideal’ woman) and Champa would be reality (Her feisty nature and flawed behaviour make her human). In the end, Sakharam has to choose between reality and imagination and his choice tells us a lot about human nature and the fate of humanity,” concludes Ashok.