The director wanted to show my quirky side, and he wanted me to ride a Bullet. 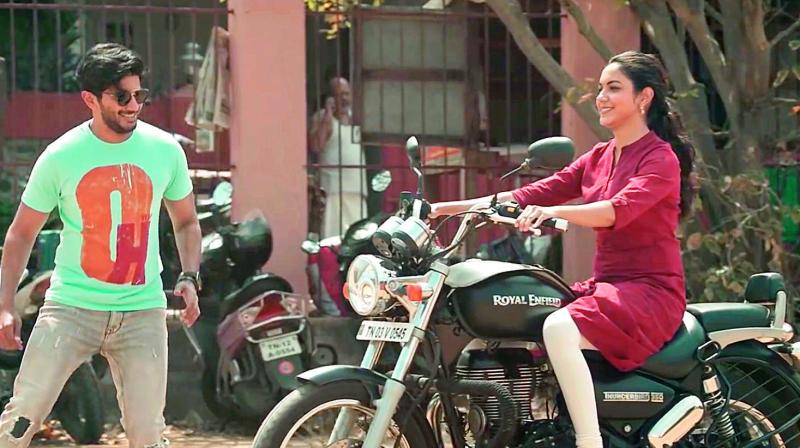 Ritu Varma and Dulquer Salmaan during a bullet riding scene from the film.

‘Petit’, ‘gorgeous’, ‘smart’ and ‘confident’, are words that describe Ritu Varma. Post the super success of Pelli Choopulu, the actress made significant strides in showbiz.

Next, Ritu will be seen in a romantic drama, Kanulu Kanulanu Dochayante, written and directed by Desingh Periyasamy, in which she is paired opposite Dulquer Salmaan.

Ritu manages to learn something new on each project. During the making of Kanulu… releasing on February 28, the actress picked up the art of riding a Bullet! “Believe me, I freaked out when I was first told that I had to ride a Bullet,” reveals Ritu, adding that it was an instant decision by the director on the sets.

“For one montage scene in a song, the director wanted to show my quirky side, and he wanted me to ride a Bullet. I didn’t know how to, but since I know cycling, I managed to balance and learn in half-an-hour. But it was very heavy,” recalls Ritu, adding that shooting for that episode was ‘fun.’

“Dulquer too helped me to pick up the skill,” she reveals, describing the Malayalam star as ‘supportive’. “He’s a seasoned campaigner and is always forthcoming on the sets. I have seen several of his films, so our conversations were centred on cinema.”

Kanulu Kanulanu Dochayante happens to be Ritu Varma’s Tamil debut. Ask her how she picked up the language, and she says, “I hired a tutor long back for around a month just get  the hang of the language. Since most of the crew speak in Tamil on the sets I was able to pick up the language easily.”

Describing the film as ‘a romantic road thriller’, Ritu states that she travelled extensively for shooting.

“We shot in Bengaluru, Delhi, Meghalaya and other North-east areas, and I had the opportunity to taste the exotic food and experience cultural diversity,” the Pelli Choopulu star beams.

Ritu is also working on a Tamil film, Dhruva Natchathiram, directed by Gautham Menon. “In fact, Gautham Sir is also playing a significant role in this film. It’s a strange coincidence,” says Ritu.