Room with a skewed view

Even when it’s bad, it’s sort of good! Such is the nature of this series... 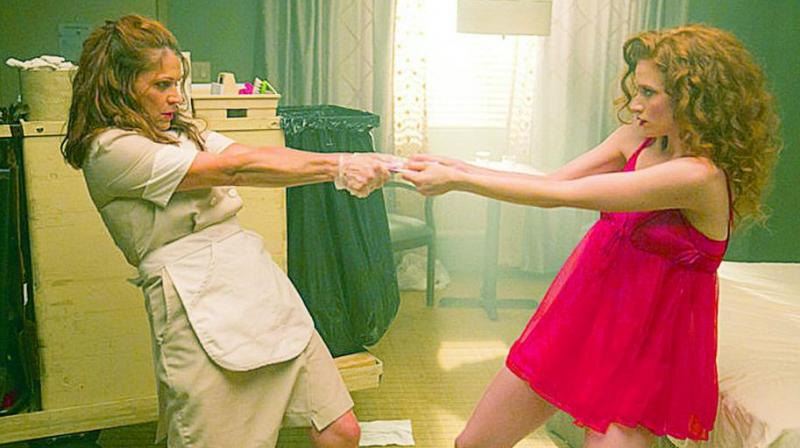 Room 104 is a strange motel room somewhere in the United States where increasingly unusual incidents unfold, leaving the viewer in a state of awe and confusion as to what exactly they are watching.

The “episodic” style that many TV series seem to be adopting recently had me wondering if there really is a need to think out-of-the-box just for the sake of doing so, or if we really have been spoilt for choice to the extent that directors and producers are grasping at straws to excite and sensationalise cinema for viewers. Well, in this case, specifically a TV series with twists and turns that will leave you utterly baffled.

Room 104 is a strange motel room somewhere in the United States where increasingly unusual incidents unfold, leaving the viewer in a state of awe and confusion as to what exactly they are watching. Attempting to articulate even a single episode would be an exercise in futility on my part, not only because every episode is completely disjointed from the others, save for the fact that they all take place in room 104.

If you’re already familiar with the other wordly works of Michel Gondry, Lars Von Trier or even David Lynch (to a certain extent), this series by the Duplass brothers is right up your alley. It is definitely intriguing. I’ll give them that. But I’ll also take away a few points on the meter due to the sheer forcefulness by which they have been thinking out-of-the-box. In fact, there is no box anymore! Only a room in which everything from out of that box which is incredibly unfathomable has been crammed into. Strange, indeed.

Do not watch it if you’re looking for something suspenseful that will reveal a typical unravelling type ending or even some semblance of a meaningful climax. But if you’re the adventurous type, by all means, watch it. You’ll like these thrilling “stories”. Each one different. Each one thrilling. Each one leaving the viewer unable to explain to anyone else what they just saw. It will be your own experience which you may never reveal or even contemplate after the fact.

Now, in defense of this genre/style, I will say that the Duplass brothers have been very optimistic in expressing their ideas in a fashion that suits today’s cinematic atmosphere, rife with tension that lurks around every corner. To do this however, I would have to conjure up a phantom state of inebriation, sending myself deliberately into the twilight zone of my own imagination compounded with that of the series’ creators. Once this is achieved, I’m able to enjoy a single episode, but then am forced to launch into another “trip” in order to approach the next episode. I assure you, if you can do this successfully, this series is immeasurably spellbinding. It will mesmerise you just enough to make you want to watch the next episode, then the next and the next until you are left totally exhausted.

Room 104
STAR RATING:  3.5/5
MUST-WATCH: for anyone with a taste of the twilight zone/dream world genre of anything (not just cinematic), I would give it two confident thumbs up and say ‘ABSOLUTELY’

— The writer is a coffeeroaster, vaping enthusiast, cinema buff and seeker
of unique stories.