Monsters in The Dark

A play that highlights human challenge in dealing with cancer. 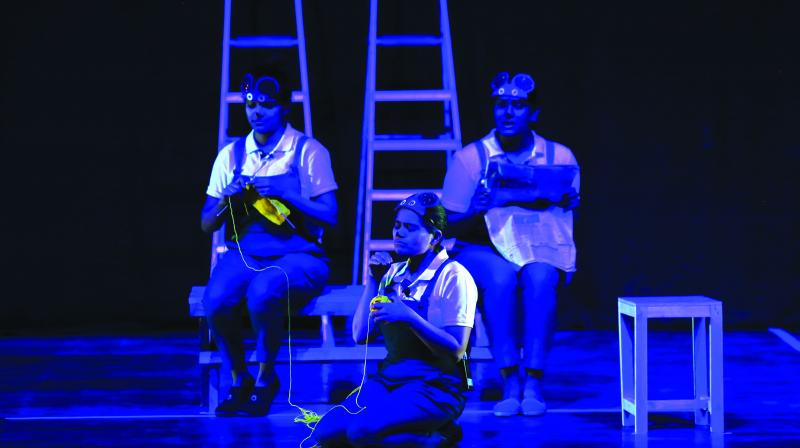 Monsters in the Dark, based on Siddhartha Mukherjee’s book “The Emperor of all Maladies: A biography of Cancer” is a 90 min adaptation that highlights human challenge in dealing with cancer.

This is part of Indian Cancer Society’s effort to raise funds through its yearly series Artistes Against Cancer in association with Bangalore’s Little Theatre and THSTI (Translational Health Sciences & Technology Institute).

The play is about people who have soldiered through fiercely demanding regimens to survive; people who have endured with them and the people who have worked to increase our understanding of cancer. The play takes us through the history of cancer treatment and research across time with stories of frustration and energy, structure and leadership, grief and survival, hope and risk, failure and endurance, isolation and confidence. The stories, personal and clinical have been brought alive through characters such as Sidney Farber, Gordon Zubrod, Carla Reed and a few more.

According to Jyotsna Govil, vice-chairman, Indian Cancer Society, the play aims to create awareness on the stigma around cancer and raise funds for ICS’s projects that give financial and emotional help to people living with the disease.

“It was cancer of the nasopharynx, not common in India, I’ve been free of it now for 10 years”, explains Minti Jain, the lead actor, playing the role of Carla Reed, who is a cancer survivor in the play. Only after the first script reading she realized what the play was really about. “The first few readings and rehearsals brought back many memories of my own experience with the monster and made me feel very connected to the narratives. Playing the role of patient Carla came rather naturally, but I also enjoyed playing other roles in the ensemble; the lawyer and especially the rat! Despite being extremely grateful for being alive and healthy today I can’t help but wonder what a human’s life is worth in exchange of a rat’s, many rats? And of course that of many other species we have not hesitated to harm or even eradicate for our benefits and in order to increase our own life spans,” she says.

For Murtuza Khetty, one of the directors, the whole idea of docu-theatre with an ensemble cast, five actors taking on multiple roles, slipping from one role to the other – sometimes right on stage in full view of the audience made the whole composition very interesting yet simple.

Tags: monsters in the dark