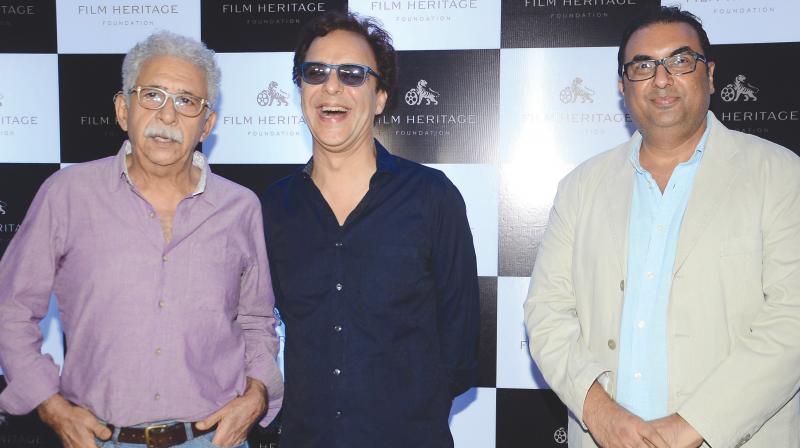 Shivendra (extreme right) with Naseeruddin Shah and Vidhu Vinod Chopra at the launch of the book.

It is a well-known fact that India is one of the highest producers of films. On an average, the country’s various film industries produce more than 1,000 films every year. The unique demi-godlike stardom that the superstars enjoy in the country has been of interest to several film scholars and writers. However, these facts eclipse the sorry state of preservation of most of these films. Unfortunately, in the cinema-frenzied nation, most films enjoy a life spanning a week. Some of the most important films, like Alam Ara (1931), the first Indian film to use sound, have been lost to oblivion due to negligence.

In 2012, filmmaker Shivendra Singh Dungarpur made Celluloid Man (2012), a film on one of the most important film archivists of India, P.K. Nair. Often compared to the eccentric French archivist, Henri Langlois, Nair was the man behind restoring some of the classics of Indian cinema during much of his tenure as the director of National Film Archive of India, Pune. It is often said that without Nair, Indian cinema would have been orphaned forever — the stories of how he resurrected cans of Dadasaheb Phalke’s films is an urban legend amongst cinephiles.

Remembering the impetus that drove him to make a film on Nair, Shivendra recalls, “The film, came out of an emotion with the very fact that the state of affairs of our archiving wasn’t very good. So many films were lost, nobody cared about film preservation.  So the film was an outburst of an emotion that I wanted people to recognise Nair saab’s work.”

Apart from winning several accolades across the globe, the film almost single-handedly dragged our attention not only to the gift that Nair had given to the nation but also the importance of understanding restoration. Eventually, Shivendra founded The Film Heritage Foundation, an NGO that worked towards preserving the heritage of Indian cinema. Apart from the late P.K. Nair, he had soon found support from the film fraternity with names like Shyam Benegal, Gulzar, Jaya Bachchan, Kumar Shahani, Girish Kasaravalli, Gian Luca Farinelli, Krzysztof Zanussi and Mark Cousins backing him up.

But the film on Nair wasn’t enough, Shivendra realised later. And soon after his demise last year, the filmmaker found himself a pile of writings that Nair had left behind for him to take care of; most of which he had written after his retirement from NFAI. “I discovered the amount of work he had done in terms of writing. After his retirement, the only way now he could propagate what he was doing — his idea of preservation — was through his writing. He had written on every aspect of cinema,” remarks Shivendra, who published a compilation of Nair’s writings on his 83rd birth anniversary. Yesterday’s Films for Tomorrow, the second publication from the foundation, is a collection of essays on Indian cinema by Nair and has been edited by Rajesh Devraj.

Talking about Nair’s flair of writing, Shivendra adds, “You have a film critic who analyses the film, you have a film lover who talks about what he loves in the film, you have an actor, or you have theorists or film scholars. But here’s an archivist writing on every aspect of cinema. Whether it’s watching his first film, to cinema object, to watching or analysing a film to actually the theoretical part of cinema, to even details like sound in cinema, gender in cinema, staircase in cinema, rain in cinema.”

The book is one of the many feathers that the Mumbai-based filmmaker has earned over the years. The Film Heritage Foundation works not only in preserving old films, but also disseminates and educates the public by holding workshops in different parts of the country. In his office perched on the lofty tower at Tardeo, the filmmaker is currently busy editing his new film on Czechoslovak New Wave. “It has been eight years in the making; it’s six hours long now and I don’t want to cut it any shorter. But more on that later,” promises the alumnus of Film and Television Institute of India.