It’s the story of a dance drama that was right from the heart. 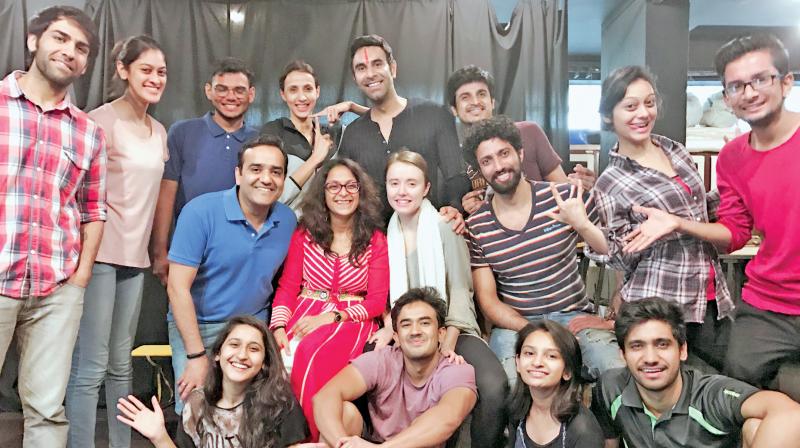 Jannat Central is a dance drama, which will premier at the prestigious Prithivi Theatre soon.

Hundreds of plays in form of dance drama are produced in India each month, be it in Hindi, English, regional languages or even Hinglish. In the dance theatre world, people talk from the heart and each story is written and performed from the soul. Many stories are traditional and are based or inspired by mythology, but there are very few dance dramas which are fictional and more importantly based on mental illness or raising some sort of society issues.

Jannat Central is one such upcoming dance drama, which will be premiering at the prestigious Prithivi Theatre soon. This interesting dance play is about a dancer father and his schizophrenic daughter. The play has a blend of various Indian and international dances all weaved into a dramatic emotional story. This play will take you through Kathak, Cuban Rumba, Brazilian Samba, Japanese Butoh, Contemporary, Hip Hop, Belly dance, Sufi and much more. All performances filled with loads of laughter, joy, tears and fears.

To make such a dance play one needs a mind that not only has deep understanding of classic theatre but also has deep knowledge of dance. No one but the super talented Trishla Patel could have done this; she is not only the director of this dance drama but has written this touching story which is co-directed by Shashank Vishnu Dutt and produced under the renowned banner of tpot Productions.

I am proud to say that over a decade ago Trishla had learnt Ballroom and Latin Dances under my guidance and I was truly humbled when she approached me saying that she wrote Jannat Central keeping me in mind, and was very keen that I play the central role of the concerned dancer Father who tries to revive his daughter using dance as a form of therapy.

Trishla Patel directed her first play for the group RAGE. It was called Dream Catcher and opened during Writers Bloc 1. It was co-directed with Faezeh Jalali.

With this, the direction bug bit her and she started her onward journey into the world of direction and writing. Thus followed Don't look Now, Love All, Kumbh Katha, Chaar Small and Zinga Zinga Roses. Before turning into an independent director she had also assisted in other theatre productions. Trishala, also an actor, has worked with various renowned theatre groups like Ansh, Theatre Unit, Arpana, Motley, Little Prithvi players, etc. tpot' Productions is a theatre group formed by Trishla and her husband, Vishal Capoor. tpot has produced a number of plays like Kumbh katha, Chaar small, Six characters in search of an author, and a co-production with Aarambh theatre called Aaj Rang hai. A number of platform performances like Love all and many children's play like Zinga Zinga Roses, Wolf, Growing Up have been made under tpot production.

After knowing Trishla for so many years, I finally asked her a question that I am sure many already have. Theatre people are considered serious, then why this fun filled name tpot? To which she replied saying, "Sandip sir we decided to name it tpot because in theatre, a lot of ideas get discussed over a humble cup of tea. Some ideas are good, some are bad, but the tea stays the same and joins the good and the bad almost like ying and yang." This thought says a lot about Trishla as a person, who not just looks at a thought or an idea but also sees what inspires it and where it is germinated.

I remember a few times I crossed my line with her and stepped out of my actors shoes suggesting her a few alterations in her script, as well as the dance routines and she without battling an eyelid, positively accepted the changes and implemented them too. Such directors are rare to find who are not rigid and are open to accepting changes and welcome new ideas with open arms.

When I pointed this rare quality to her, she humbly put it all onto her teacher, her guru, theatre maverick Pandit Satyadev Dubey. She said, "My Guru always inculcated the need of positive theatre in me, that's why I am like this and my tpot production means 't' which stands for theatre and the ‘pot’ for a pot of ideas or ‘pot’ for positive energy in theatre. I want the shadow of Dubey sir's thoughts to always fall on our group and bless us.'

Trishla believes in encouraging people of all ages to pursue the art in order to preserve a certain level of well being in the individual thereby maintaining a cultural balance in society with a dash of fun.

Production team consists of Vedika Sai, Ajinkya Hukerikar, Anuj Rampal. The dramatic costumes for all the dances and the scenes are designed by very creative Priyanka Kaul, Lights are by Shawn Lewis, sets by Peddy Maurya, Sound by Kedar Bhagat and Manoj Chinmanani, poster by Varun Kapoor and backstage management by Prashant Amlani. Trishla's thoughts and imagination have been perfectly executed through dance choreography by graceful Kathak dancer Smriti Bhandari, for Indian dances and multitalented Ashutosh Arya, for all other international dance forms.

The story of Jannat Central takes the audience through a whirlwind of emotions but the most beautiful part of Trishla's dance drama is the idea of using various dance forms to show different feelings. The birth of the child is shown through the Cuban dance of love Rumba, celebration is shown through the Samba, the trauma of the mind is showcased though the unique Japanese dance Butoh, modern ways of cleansing thoughts though hip hop at a disco, dream of father daughter meeting by Polish Polka, souls reaching the divine through Sufi dance, prayer before a dance is done through Kathak and many more such creative ways of bringing in dance on stage.

If I have to put the story in the form of a synopsis, I would say, two girls, J and Nutty are as different as chalk and cheese, but get along really well. One seems to be struggling with even the most mundane of things while other is trying to perfect her dancing skills and get work.

Things change with the arrival of a dance teacher and the antics of a friend called Bobby. The common language between them is dance that binds them as well as separates them. Through dance we explore the complex relationship between a father and a daughter and discover the true meaning of Jannat (heaven).

Generally, for all my previous dance dramas I have been the creative head, but for the first time I have worked under someone else's guidance and I must say it has been a complete privilege to be learning under my own student.

Trishla Patel is one director who has time and again proved herself to be better than the best and with this first dance drama by her production house she is yet again out there to show the world that she is one marvellously gifted director who knows how to balance the idea of dance, theatre and at the same time talk openly about the complications which people with mental illness go through. And more importantly how an art like dance is as good as medicines and can cure almost all problem of life.

Today with this article I would like to wish Trishla Patel and my entire team all the very best for a show that will make people get up and notice dance in a complete new avatar.

Sandip Soparrkar is a well known ballroom dancer and a Bollywood choreographer.