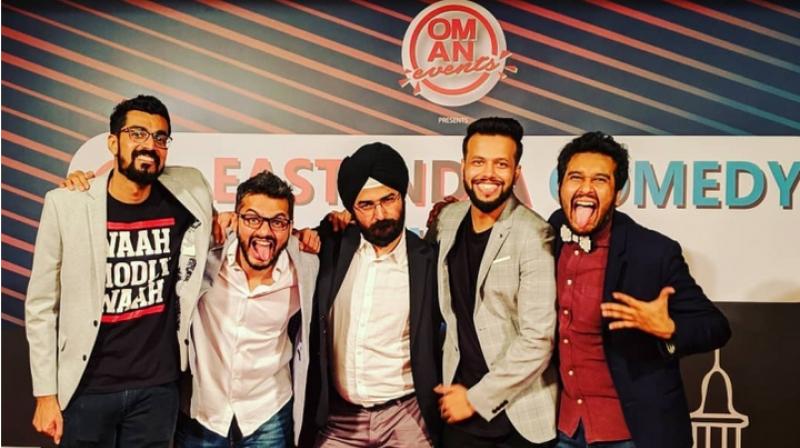 Mumbai: Stand-up comedians Aadar Malik, Sahil Shah and Azeem Banatwalla are the latest names to apologise for their years old and "out-of-context" videos and social media posts that have resurfaced online.

The comedians said they were sorry if they had offended or hurt anyone's religious sentiments and also requested that their families be spared of online vitriol.

The development came days after several comics such as Vir Das, Rohan Joshi and Kaneez Surka alleged that their personal contact information and addresses were leaked online, which led to vicious trolling.

Earlier this week, Twitter users dug out screenshots of jokes of some comics, including Varun Grover, Aditi Mittal, Abish Mathew, which they had cracked in the past.

These users claim that comedians used Hindu gods in their joke punchlines and started trending #HinduphobicComedyIndustry.

Joshi claimed that his family was being targeted with hate messages and announced a hiatus from social media.

On Tuesday, Malik took to Twitter to apologise for hurting religious sentiments.

"Some clips of my videos are being shared on social media. I'm really sorry if I've hurt anyone's religious sentiments or if anyone has got offended by these videos. These are eight-year-old videos, and they have been taken out of context and time," he said in the video.

The comic also claimed that he is getting a lot of hate messages and threats to his family on social media, and requested trolls to take a step back.

"It becomes a very scary atmosphere to live in. As comedians, we just want to make people laugh...

"We were learning comedy at that time, trying out new jokes. If I've hurt or offended anybody, I apologise again... Over time, we have matured, become better and have changed. This won't happen again," he said.

Shah, a member of the East India Comedy (EIC) group, said he was apologetic for cracking a joke on Chhatrapati Shivaji Maharaj all those years ago.

The comic said he understood the anger behind his old joke and he has deleted the said video.

"I should not have cracked a joke on Chhatrapati Shivaji Maharaj at all. Once again, I'm very sorry. I have deleted that video. Henceforth, whatever comedy I do, I'll do it thoughtfully and responsibly," he added.

While apologising "unreservedly", Banatwalla said he had temporarily suspended his Twitter account as people had been pouring in the "vilest of Islamophobic abuse to me".

"It has come to my attention that many people have been upset and offended by tweets I have made many years ago. For that I would like to apologise unreservedly. Many of these were before I even starting doing comedy, but that does not excuse the fact that they were not acceptable," he said.

"I am willing to accept my mistakes and grow as a person, and I sincerely hope these people can find it within themselves to do the same," the EIC member tweeted.

Last week, a female stand-up comic was subjected to online rape threats and abuses after a year-old video of her allegedly cracking a joke on Chhatrapati Shivaji Maharaj's statue surfaced.

She later took down the video and apologised on social media.

The National Commission for Women (NCW) on Sunday sought immediate action from Gujarat Police against one Shubham Mishra for allegedly hurling abuses and giving rape threats to the said comedian on social media.

Vadodara Police had arrested Mishra on Sunday for the alleged video.

Mumbai Police's Cyber Branch, too, took suo motu cognisance of another alleged threatening video against the comedian and arrested Imtiyaz Sheikh, who used the profile 'Umesh Dada' on YouTube, on Monday.