Ravi Rastogi: Dancing his way from Bareilly to Broadway

Zumba is another specialised dance style that he knows like the back of his hand. 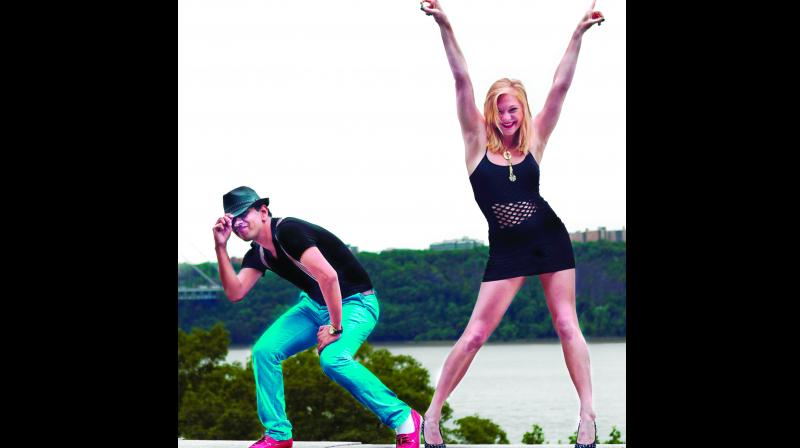 Conventionally, you expect a doctor’s son or daughter to become a medical professional just as you assume a businessman's son to join the family business. But then there are exceptions and really good ones at that. Ravi Rastogi, who hails from a jewellery-makers' family in Bareilly (Uttar Pradesh) is one among them. Born and brought up in this small UP town, Ravi had to leave school education midway to support his father who faced heavy losses in business then and had to shut it down. However, while he could quit studies easily, he couldn't do so with his dancing about which he was, and is, quite passionate. But if Ravi could pursue his passion, the credit goes to his elder brother, who stood behind him like a rock. Today, Ravi is a renowned US-trained dancer, choreographer and fitness coach for whom dance is not just a passion but a way of life, a way to spread happiness and joy in life.

"It is unfortunate that I lost my brother at a young age in an accident but it is because of him that I am wearing my dancing shoes today," says Ravi, adding his brother, in fact, had left home to learn dance as there was opposition from the family. "He wanted to make his career in dancing and came to Delhi to pursue his dreams but destiny had other plans," shares Ravi in a solemn tone. In his case too, the family did not provide any support.

"Till such time my elder brother was with us, I followed him and his moves. I also started teaching and performing in small dance troupes and was noticed by an Army officer's wife at one of her events. She encouraged me to pursue advanced dance training at a reputed dance school. From then on, I started my journey as a dancer, learning from the masters and also teaching students of all ages," he says. This is something which polished his craft.

"One of my students was an American Indian woman who had heard about me being a good salsa instructor. It was she who guided me further. I spoke to her of my dream of going to New York for training at the Broadway Dance Centre and with her guidance, I was able to achieve this goal," reminisces Ravi.

Technically trained in jazz from Broadway Dance Centre in New York, Ravi also learnt salsa from world-renowned teachers, Eddie Torres and Frankie Martinez. "But it was not that I wanted to dance for myself. I always wanted to teach dance to the people who are shy and conscious by nature. When I attended Zumba Convention at Orlando, USA, I decided to teach this style as if there are no technique involved in learning it and as if is the easiest thing on the earth to do," says Ravi.

Zumba is another specialised dance style that he knows like the back of his hand. "A mix of dance and fitness, it is an exercise on rhythm and music which brings a lot of energy and rejuvenation to the dancer and he/ she remains forever in shape," he puts in.

A Zin member (Zin is an international association of Zumba Instructors Network that certifies dancers to teach Zumba and provide choreographies used for teaching), Ravi shares that he had to face a lot of challenges as people were never appreciative of this style of Western dance. "If ever I had to book any auditorium for a show or approached any school to conduct dance classes, I was never welcomed as they wanted to promote Indian classical dances," he recalls, "but with globalisation, Internet and social media marketing, the mindset changed".

As knowledge poured in, people started experimenting and accepting other styles too. "Western dance is here to stay," says Ravi who considers Frankie Martinez and Eddie Torres as his ideals. Little wonder then that when he started taking home tuitions in 2002, there were only two students and now his academy, Moving Souls which took off in 2010, boasts of 80 students in different batches of dance forms, including Salsa, Bachata, Cha Cha Cha, Merengue, Jazz, Hip-Hop, Zumba and Bollywood.

Ask him if a person today can pursue this artform as a full time vocation and he replies in affirmative. "In today's time, a person can pursue it as everyone wants to learn dance, either to perform socially, to participate in a reality show or as a vocational hobby. So, the scope is immensem: he says.

Ravi also had a foray in Bollywood - he worked with Emran Hashmi in Jannat 2. Besides, he regularly performs and choreographs professional shows for television, film, commercials, weddings and dance conventions.