Hope in time of hatred

Currently busy with work preparations and travel, she has two movies coming up – My Story and the much-awaited Anjali Menon movie. 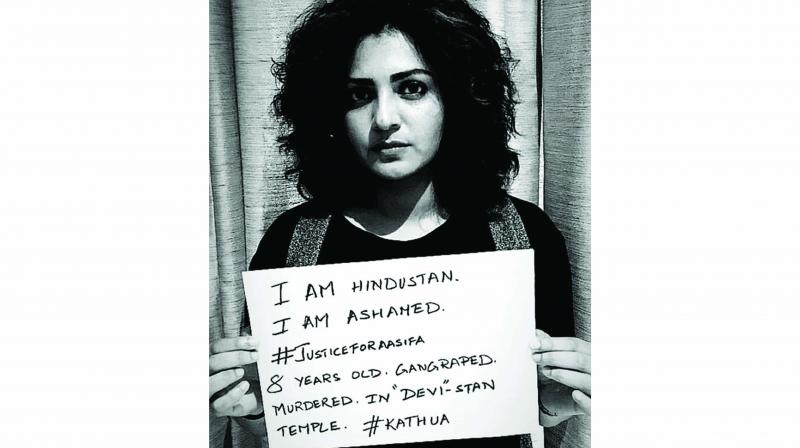 In less than a few hours after the 65th National Awards were announced and she received a Special Mention for her role in Take Off, Parvathy Thiruvoth Kottuvata performed her most special act. She posted on social media a photo of her holding a placard that read ‘I am Hindustan. I am ashamed. #justiceforaasifa. 8 years old. Gangraped. Murdered. In “Devi”-stan Temple. #Kathua’.

To an award that comes just days after the world was shaken by one of the most heinous hate crimes that happened in the country – the torture-gang rape-murder of an eight-year-old Bakherwal nomad girl in a temple in Kashmir — the actress, known for her bold and uncompromising stance responds in typical Parvathy style. Like the rest of her countrymen, Friday happens to be a day of mixed feelings for her too. “Yes, it is a day for pride that our films have been recognised on a national level. But it never takes away the pain of what actually happens around us. The artist and citizen in me are extremely saddened and angered by how things are at the moment,” she says.

Parvathy adds that there’s still hope left. “Yes, I am hoping for a change,” she stresses.

In Take Off, Parvathy plays Sameera, a pregnant nurse caught in a warzone, where she apart from taking care of her young son and looking for her missing husband, leads a rescue operation in Iraq by transporting to safety her colleagues who are held hostage by ISIS.

The fiery actress, who was hailed for her powerful act as a gritty nurse, had earlier won the Best Actress Award at the 48th International Film Festival of India, becoming the first Indian actor to have won the Silver Peacock. Sameera had also won Parvathy her second Kerala State Award for Best Actress in 2017.

Like laurels, Parvathy is no stranger to brickbats and she knows nothing can pull her down. She says, “Acknowledging and respecting an award is what I would do as an artist. But I will not back down in voicing what I feel should be done.”

Currently busy with work preparations and travel, she has two movies coming up – My Story and the much-awaited Anjali Menon movie.