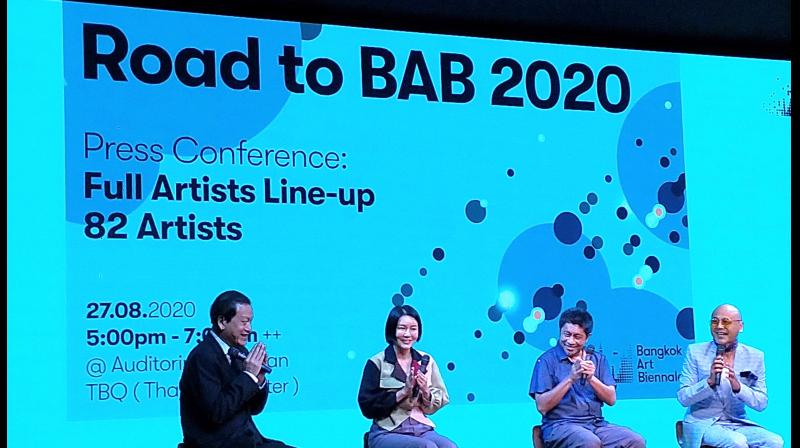 Thailand, with no local cases of COVID-19 for more than three months, is holding its first international mega-art event.

The inaugural BAB was held in 2018 and attracted as many as two million visitors.

While this year’s event will mostly focus on local visitors, it’s a huge boost to the international image of the country.

More than 82 artists from 35 countries will partake in this year’s Biennale, which will be held both as physical events for local audiences, and online shows for international art lovers.

There are many big names at the Biennale, most of whom may not be able to attend the event, but their artistic works will be present.

There will be many Thai artists, too, big names as well as new talents. These include renowned filmmaker Pen-ek Ratanaruang, internationally acclaimed Ruangsak Anuwatwimon, actor-photographer Michael Shaowanasai, young artist Lampu Kansanoh, and many others.

In fact, COVID-19 has given a big boost to Thai artists, since many foreign artistes could not attend.

The artworks at the Biennale will feature paintings, sculptures, photography, installations, video art and performance art.

Like the last Biennale, the venues will include indoor museums and cultural centres as well as outdoor parks and ancient temples. Due to the coronavirus, there will be only nine venues this time, compared to 20 venues last time. And to reduce crowds, the Biennale will rotate to different venues on different dates.

Artistic director of the Biennale, Dr Apinan Poshyananda, admitted that the decision to hold the Biennale was taken after much thought and discussion. If they finally decided to go ahead with it, it was because Thailand was fairly virus-free, compared to the rest of the world. The WHO has been very impressed with Thailand’s performance” he stated.

Dr Apinan was also gladdened by the enthusiasm of the artists. “Their creativity seemed to increase, with the pressure of the virus!” he declared.

However, migration is an important theme for many artists partaking in the Biennale, including Rushdi Anwar from Kurdistan, who after a long stint in Australia, now lives in Thailand, but has not forgotten the refugee situation in his homeland. It forms the basis of his artistic work at Bangkok’s art-event.

Migration is also the theme of well-known Indian artist, Reena Saini Kallat’s work “Woven Chronicle” which has been shown in the top museums of the world like MOMA, and will be on view at Bangkok’s BAB. The work consists of the image of a world map, dotted with electric wires. According to Reena, the wires stand for technology and communication, as well as for barbed wires and incarceration, both of which migrants face, all around the world.

Reena, who had visited BAB in 2018, said: “We were struck by the quality of the works, the curation, and how beautifully the Biennale had been installed!”

For this year’s Biennale, an “Iteration” of her work is being created by Thai artisans. “The Biennale team has meticulously put it together, based on our guidelines, using locally sourced wires, cables, sounds that consider the equatorial viewpoint and migration patterns of the region!” she said.

The other Indian artist at BAB is Sarah Naqvi, who currently has a residency in Amsterdam. Her work combines textile art, installations, video, with narratives around religious and feminist themes.

Dr Apinan was delighted by the works of both the Indian artists. As for the “new normal” of COVID-19, he explained that all safety procedures would be followed at BAB 20, not just in art venues but also in the packaging, transport, delivery and installation of the exhibits. In fact, the Biennale was closely working with the ministry of health to follow all safety norms. They also had a huge team of volunteers to help with this, both here and abroad.

“When we made our first announcement, we got as many as 700 volunteers!” he stated. Prof. Apinan admitted that the whole art-world would be eyeing this Biennale in Thailand. “People might be able to use BAB as an example of how to organise a Biennale, in a crisis!” he exclaimed.

Agreeing with him were senior representatives of TAT (Tourism Authority of Thailand), TCEB (Thailand Convention Exhibition Bureau) and chief sponsor Thai Beverages Company. They all agreed that BAB 2020 would give a big boost to Bangkok, when international air-traffic is opened soon, to overseas visitors. “BAB has become an art event of global significance, which will transform Bangkok into a hub for art and culture,” said the BAB artistic director.