Classical music baithak at Delhi gurdwara: Of ragas and Sikhs 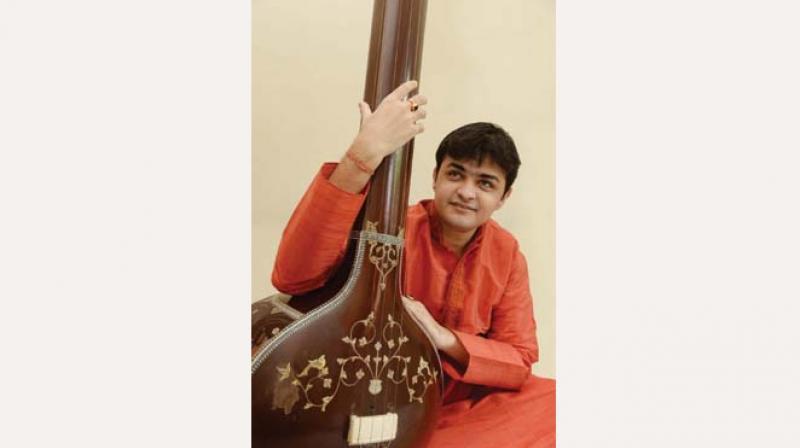 The Guru Sangeet Academy run by Ustad Bhai Baljit Singh of the Namdhari tradition recently held a classical music baithak in a Tilak Nagar gurdwara. It was an eye-opener to see the enthusiastic audience largely comprising residents of the area. Lutyens Delhi audiences tend to feel the world of classical music is confined to its environs; but mercifully that is no longer the case, with concerts happening in Gurgaon, Noida, and Northeast and West Delhi. What was laudable was that several prominent members of the music fraternity had made it a point to attend the concerts, despite the distance and timing (the concerts started in the afternoon heat) Thus, there was Ustad Mohsin Khan, his talented sitar player son, Mehtab, who is making waves in the world of sitar today, Pt Ojesh Pratap Singh, himself a very fine vocalist and teacher, amongst others.

Bhai Baljit Singh’s music school has 1,200 students; he painstakingly supervises their instruction. Both his children (Luxmi and Fateh) are also musicians; keeping alive the tradition of music that has existed since the first Sikh Guru Nanak sahib himself. Bhai Baljit Singh, apart from being a fine Sikh kirtan singer, also has trained in the classical tradition under such masters as Ustad Vilayat Khan himself. It is a little known fact that every verse in the Guru Granth Sahib is in raga; yet the common perception is that Punjab is devoid of the classical music tradition.

Bhai Baljit Singh’s talented and beautiful daughter Luxmi sang, followed by a tabla solo by Sangeet Natak Akademi awardee Yashwant Vaishnav. A disciple of Punjab gharana’s Pt Yogesh Samsi, Yashwant is an able disciple of a virile tradition of tabla. His strong “bols” (strokes) and emphatic playing were impressive. though he is all of 24 years. His “teen taal” (16 beat time cycle) exposition was exciting, racy and packed with material. One can look forward to a great future ahead in music. He was accompanied on the harmonium by the Maihar gharana exponent Paromita Mukherji.

The concluding concert was by Sameehan Kashalkar of Pune. Son of Pt Ulhas Kashalkar, Sameehan is slowly carving a niche for himself in the world of vocal music. Blessed with a deep sonorous voice, Sameehan is a pleasure to listen to. He started with the afternoon raga Multani. Multani perhaps had its origins in the Multan region of undivided Punjab; it is a sombre and grave raga. Sameehan was able to establish it with ease, singing a brief “auchar” (introduction) before singing the popular piece “gokul dham” in a slow “ek taal”. Slowly building up the tempo, he concluded with a “tarana”. On request from Bhai Baljit Singh, he concluded his recital with raga Bihagada, with a composition by Ustad Mehboob Khan, who composed under the pen name “Daras Piya”. On the tabla was Fateh Singh, able son and disciple of Bhai Baljit Singh, and on the harmonium once again Paromita Mukherji, whose knowledge of ragas is matched by a sensitive receptive spirit, so necessary for accompaniment.

The concerts concluded with “Guru ka langar”, another great Sikh tradition that has endeared the religion to everyone, worldwide. The concept of eating together, irrespective of caste, created a bonding that the first Guru wanted to establish. He was also remembering the great tradition of Punjabi hospitality in which no one leaves your home hungry.