Keeping Zohra’s enigma alive in her own style

The fourth annual Zohra Sehgal festival of Arts featured film, dance, music and theatre, all of which Zohra was involved in. 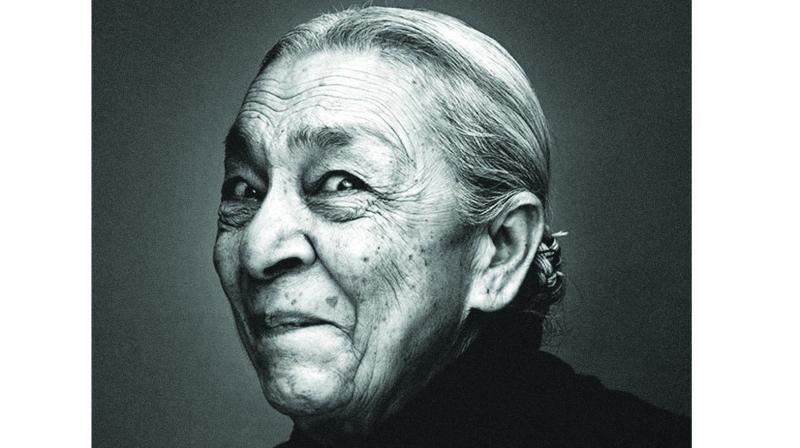 Age could not dampen her high spirits or her zest for life, for Zohra Sehgal in every way exemplified the words of Hilaire Belloc “there's nothing worth the wear of winning/But laughter and the love of friends.” That the 4th consecutive annual  Zohra Sehgal festival of the Arts, in collaboration with the India International Centre, supported by the SNA, NCZCC and YWCA should this year be dedicated to Joy Michael, the founder of Yatrik a multi-lingual Repertory Company and the other female art icon India lost very recently, was so fitting. At the C.D. Deshmukh auditorium, tall Ishara Puppets greeted the visitor entering the tastefully decorated foyer with exhibitions of Ikebana flower arrangements by the Ohara School of Ikebana and studio pottery from the personal collection of Anuradha Ravindranath including works of Sardar Gurcharan Singh founder of Delhi Blue Pottery Trust and other artists.  Ashish Mohan Khokar's witty inaugural address as curtain raiser spoke of the spunk of a woman who born over a hundred years ago in Lahore “the culture city” of undivided India, epitomised woman power, freedom and dignity, much touted to-day. Living life on her own terms, she never allowed any trials (and she had her share of crosses to bear) to destroy her sense of joy and fun. Ashish spoke of his homage as “guru dakshina”, as the son of his late father Mohan Khokar, one of the first students of Zohra Sehgal when she started classes in India. Also hailing from Lahore, Mr Khokar was the first person from the Indian Dance fraternity Zohra formed an early association with.

Rimpa Siva, in her twenties, the only Princess of Tabla heralded the percussive start to the festival with the Farukhabad gharana bandishes — of Ustad Karamatullah Khan Saheb and others including Swapan Shivaji her guru and father. As a flamboyant player with all guns blazing all the time, if only she could bring in some of the softer rhythmic touches, and tonal melodies into her playing, her tabla artistry  would have more rounded appeal.

One of the festival high points was the Odissi solo by Aruna Mohanty. Always a perfectionist in terms of technique, this thinking dancer’s creations have a quality of maturity with an ideational supremacy combined with the ability to translate what she conceives into dance — putting her in a category much above the general run of performers. She was assisted by a fine group of musicians with Bijai Kumar Barik on Mardala, Rupak Kumar Panda providing vocal support, Suramani Rameshchandra Das on violin and Srinivas Satpathy on flute. Her start was with Varsha Abhisar expressing the joy and expectation of new life springing from under the soil, during the rains, welcomed by the parched earth, singed by a sapping, torrid summer. During this regenerative joy of Nature all round, as the monsoons bring the bounty of much needed water ( Barasarasa) the hearts of lovers are quickened by strange longings and yearning for the beloved. This introductory format is inspired by the Pala tradition of Odisha. The next part draws its visual imagery from the verses of Kalidasa. As the black clouds roll, like elephants marching in a procession, streaks of lightning cross the sky like sudden swirl of flags are accompanied by the role of thunder like victory drums heralding the approach of the monsoons. With the music conceived and set in the apt raga of Megh, by Ramahari Das and Dhaneswar Swain's rhythmic contributions, Ms Aruna’s dance imagery radiated an unhurried beauty, holding each moment in cherished intensity and the expressional impact, with the dancer’s very evocative mukhabhinaya, made every idea come alive for the audience. The dancer next went on to the purely interpretative, based on an Ashtapadi from the Gita Govind “madhave makuru maninimanamaye” set to raga Saveri by Subhash Pani. Here the sakhi entreats upon Radha to forgo her wounded pride, by giving in to what her heart is craving for — for her heart’s desire Krishna awaits her arrival, lying on a bed of lotuses. The sakhi tries various ways of getting Radha out of her sullen mood - only to find her repudiating every conciliatory move. “Ma pariharahe harim atishara ruchiram…” cautions the sakhi reminding Radha that recoiling from Hari or turning her wounded pride on him would not help, for he too is proud. Finally she succeeds in seeing Radha off to meet Krishna. Aruna's animated abhinaya has always given her expressional dance that edge.

The concluding number Prati Nayak (anti-hero) was a vivid example of the dancer’s creative imagination delighting in delving into themes beyond the orthodox repertoire, while never letting technique overstep prescribed boundaries. “Mo ochhi boli  tome  ochhu” (you exist because I am) says evil to the Almighty.

“But for my presence, there would be no need for you, for your rise is when I fall. Eternally I exist and you come to me as Ishwara. In each Yuga I have questioned your supremacy — as Hiranyakashipu in Satya Yuga, as Ravana the embodiment of arrogance in Tretayuga and as Kamsa in the Dwapara Yuga. And in Kaliyuga I exist along with you inside each person. My love for untruth, lust for women, and violence are opposed to your penance, compassion and truth.” Kedar Mishra’s libretto composed after research was set to impactful music by Ramahari Das with rhythmic contribution by Dhaneswar Swain. The one aspect which was discordant was the English commentary at the start and a little later too. It somehow brings in a note of ras- bhang. Why not change to Odia or if one wants to communicate with the larger multi lingual audience, Hindi?  However the dance brought out the inevitably coexisting polarities in life, each force drawing its identity from the other. Ms Aruna’s dance with a fleeting montage of stances representing the  Dashavatar of Vishnu was so fitting, in tune with the proclamation in the Gita that “when evil begins to assume supremacy, to re-establish the primacy of good, I (Divinity) will make my appearance on Earth, again and yet again.” (…..Sambhavami yuge yuge). And even while mythical characters like Rama, Krishna, Hiranyakashipu, Kamsa, Ravana are all very common to dance themes, the way these were fleetingly represented in Ms Aruna's  chorography, was different and refreshing.

The festival featuring film, dance, music and theatre, all of which Zohra was involved in, on the second evening had a fine session of Chhatisgarhi Folk music by Nageen Tanvir who inherited her talent and repertoire in this field from her late parents-the theatre stalwarts Habib and Monika Tanvir. With her singing aptitudes further honed under well known classical gurus Smt Sharbori Mukherjee, Dipali Nag, Smt Sulochana Brihaspati and Gundecha Bandhu, she, along with her partner singer Lata, brought the fragrance of Chhattisgarhi in its original old dialect alive, rendering a variety of songs sung in various situations, ending with the Gondwana — part where  cultural influences of Odisha, Bengal, Andhra Pradesh and Chhattisgarh meet in the Devi worship “Maiyan pancha range”.

The festival featured very interesting films, a totally forgettable Lavani Dance and the ever green play Charandas Chor  Habib Tanvir’s classic enacted by Naya Theatre, with the wonderful Panthi Satnami dancers adding their dance skill to the acting talents. A fitting tribute for both Zohra and Joy!