This is a gripping psychological drama which relies on artifical intelligence to obliterate pain. 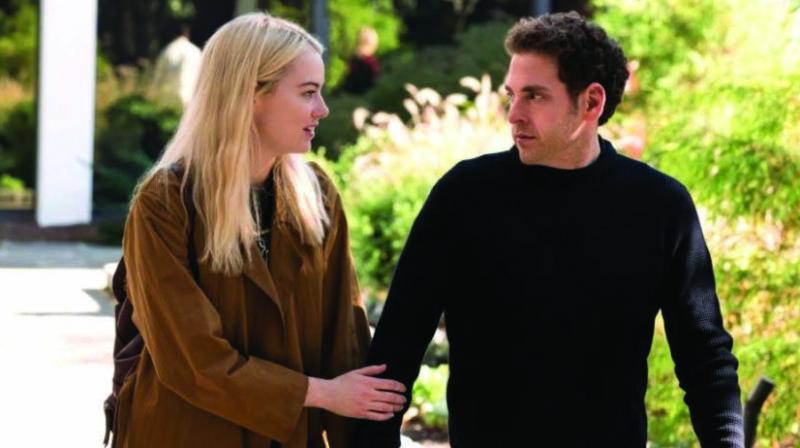 Emma Stone and Jonah Hill in a scene from Maniac.

When you hear the name Maniac, you would expect a psychotic killer on a rampant spree to murder hapless victims and striking a terror in people’s heart. This 10-episode Netflix show is a misnomer. Yes, it is a psychological drama that relies heavily on Artificial Intelligence to resolve human dilemmas.

The two lead protagonists — Annie Landsberg  Emma Stone) and Owen Milgrim (Jonah Hill), are dealing with mental issues. In Annie’s case, the demons of her traumatic past —a mother, who abandons Annie and her young sister Ellie along with their father, makes her a deeply protective older sibling. However, the equation changes as they grow up and the sister squabbles take a horrifying turn when Ellie ‘s killed in an accident. Annie, is never able to reconcile to that death, holding herself responsible. The guilt messes up her life to such an extent that she seeks solace in a drug that obliterates the incident from her memory temporarily relieving her of her trauma. This wonder drug ULP,  is manufactured by Neberdine Pharmaceutical Biotech. The purpose of this drug is allievate all mental pain freeing the human race from the burden of trauma. The man behind this is James K Mantieray, a scientist who proudly refers to himself as a neuro chemist.

So why is James so concerned about the greater good of mankind? There is history here too, James shares a complex relationship with his mother, Dr Greta Mantieray, (Sally Field) a famous therapist. Both mother and son were abandoned by James’s father, post which he developed an addiction to sex.

So James is determined to find a permanent solution to erase all plain from the universe. As part of this plan, the pharma company (through  rigid pre-interview tests) shortlists 10 candidates who are part of the ULP trial process.

This is where the drama takes on a futuristic narrative in the science fictional genre.

The candidates have to take three levels of pills A, B and C — each pill has designated purpose. A identifies the cause of pain, B delves through the trauma and C helps people annihilate it . But unlike the conventional method of visiting a therapist, like his own mother, James has created a high end software called GRTA. So the 10 candidates are made to sit on special chairs in a room, where a contraption which looks like a headphone is placed on their head. A contraption is attached to hand and the accompanying wires are liked to GRTA.

So, AI uses brain mapping and instant recording of images and thoughts to piece together a person’s state of mind, eventually hoping to  ink out all pain and heal them. So, what one sees is a AI version of hypnotheraphy and past life regression therapy done by GRTA, who has been configured with the human emotion of empathy. Unfortunately when GRTA becomes a victim of human depression and appears to be on a path of self and client destruction, a desperate James seeks his therapist mother’s help to call of the failed experiment. There is a lesson here, that software cannot replace sensitivity and emotion.

The lead characters perform their parts remarkably well. The ladies, Emma Stone and Sally Field steal the show with their powerful performances, playing multiple hallucinatory characters, during the shows journey.

Owen’s last name is Milgrim. The same name as the famous psychological experiment Milgram’s 47, which tested if subjects would deliver pain to patients based on instruction. The show is Cary Fukunaga’s first directorial effort since Beasts of No Nation in 2015.