Indian classical musician Pandit Kartick Kumar establishes his own foundation in the city to teach and serve people through music. 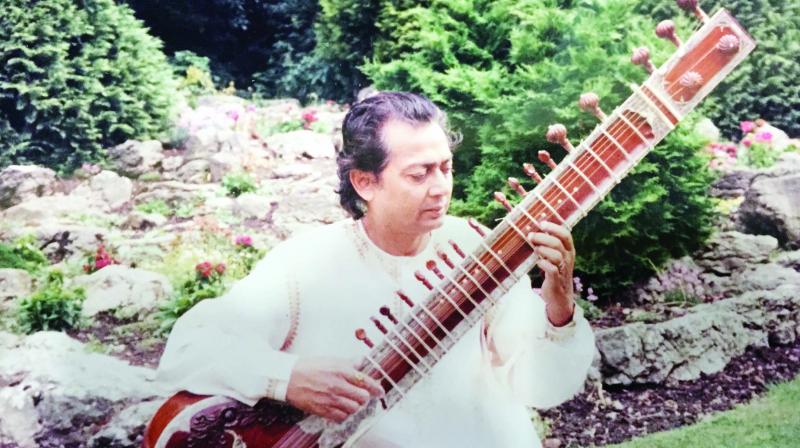 Veteran classical instrumentalist Pandit Kartick Kumar is among the greatest gurus of Indian instrumental music in Indian musical history. He is also the senior most student of the revered virtuoso, Pandit Ravi Shankar and the two have had a history that spans almost half a century.

On his 82nd birthday yesterday, Pandit Kartick Kumar opened the gates to a first of its kind Indian music and arts culture centre in the city — The Pandit Kartick Kumar Foundation. The institute is situated at Rang Mandir in Bandra and is an initiative for all those who wish to find a new window to learn, understand and pursue Indian music and culture. The event was inaugurated by Mr. Amitabh Bachchan and Pyarelal Sharma and the other special guests for the inauguration included the Mayor Of Mumbai Vishwanath Mahadeshwar, President of Yuva Sena Aditya Thackeray and Bandra West MLA Adv Ashish Shelar. The day-long celebrations were ushered in with a stellar line-up including artists such as Pandit Vishwamohan Bhatt, Mahesh Kale, Rahul Deshpande, Amaan Ali Bangash, Niladri Kumar, Vijay Ghate and Sheetal Kolwalkar among others.

The maestro himself delivered a hair-raising performance on the Surbahar and was delighted to see his vision taking shape through this foundation, he says, “My son, Niladri Kumar has done all this without my knowledge, after completely building the foundation he told me about it and it was an extremely happy moment for me.”

Pandit Kartick assures that this foundation is different from other profit-making institutions, with the sole purpose of making music accessible to all, “This foundation will work differently from other institutions. Everything in this world works on the fundamentals of — meva and seva (service for profit making). My idea for this foundation was that it will function only on seva bhaav (serve through music),” he shares. Adding, “We are not after name and fame, my son Niladri Kumar is already famous in the world and a few people know me as well. We only want to serve people with good music and sanskaar (values). There is no music without sanskaar and this foundation is rooted in this belief,” he convicts.

True to his word, the organisation functions on subsided rates and although they would love to teach music for free, Pt. Kartick informs that they would initially need support to take care of all the necessities required to run the foundation. “I ideally would love to keep it free for all. But currently, we have subsidised rates and we have the support of donors who sponsor an individual student for those who cannot afford to pay,” he informs.

The veteran musician has been imparting musical knowledge to students for years, starting from 1958 when he shifted to Mumbai and was training students at the Kinnara School. An established concert performer, Kumar was also a music professor at Sion’s Shanmukhananda Fine Arts Sangeet Sabha for 30 years since 1974. His son Niladri Kumar is among the finest students under the tutelage of Pandit Kartick Kumar. “Music is so integral especially at the young age that we wish to encourage more and more to learn this art form. Niladri along with Padmashri Vijay Ghate and the team of young talented individuals were of the belief that they should create a learning hub with this vision of service and thus they requested me to helm this initiative,” he says.

At the foundation, Pandit Kartick Kumar is a regular visitor. However, he informs he isn’t actively teaching at the moment, “I do come regularly to the Foundation and visit. I monitor the students and they have their checks done by me but I don’t actively teach. I have taught all I know to my students and to Niladriji who he will take that forward to the next generation. I have always enjoyed teaching my entire life. My training is a science. It is not easy to learn with me. It’s a lot of brain, hard and heart work,” he says.

The sitar virtuoso is also positive that the future generation is shouldering the legacy of Indian classical music with the same fervour of yore, “Classical music is not easy. But that doesn’t mean we should discourage people from learning. Science isn’t easy either, neither math or any other profession which people take up. But people still pursue it. The younger generations are speaking the language that is needed now to communicate. And I think they are all doing a great job,” he acknowledges.

His first significant breakthrough in the world of music came in 1958, when he bagged the prestigious President’s Gold Medal All India Award for sitar at a music competition held by AIR. Shortly after winning this title, he met Pandit Ravi Shankar who took him under his wing. Thereafter Pandit Kartick’s life has been full of achievements and historical events. Indisputably, he has lived an exemplary life and his contribution to music remains unparalleled.

With utmost humility he narrates, “My greatest accomplishment right now is being able to enjoy and live the life I do and be happy. My work lives on through Niladri Kumar. All the other accomplishments just happened on my journey and I am grateful for receiving all that.”