A tale for all ages

A new adaptation of Pinocchio by Gulzar will help children learn a few tricks on lying and will allow adults to grow young once again. 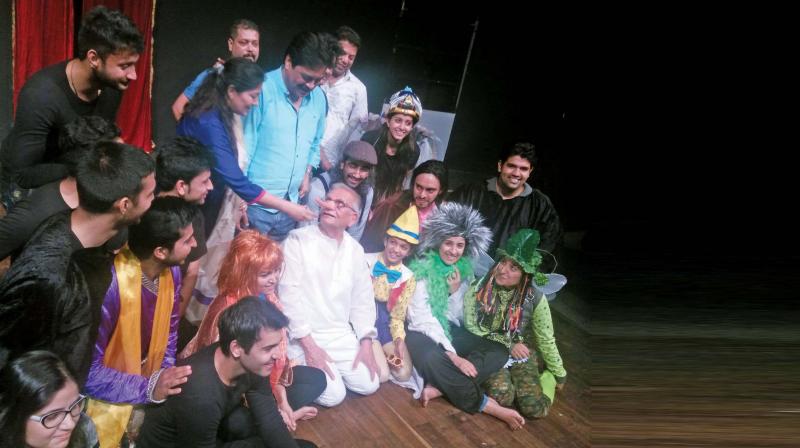 Gulzar wearing the Pinocchio nose during the rehearsal of the play.

“Parents often tell their children not to lie, but I find that ridiculous. I say, they should lie. Otherwise they would grow up to become a dullard. When children lie, it is full of imagination and innocence,” remarks poet-writer-filmmaker Gulzar. To give the children in the city a healthy dose of literature and theatre, Gulzar has collaborated with theatre director Salim Arif on Pinocchio. “During the summers Prithvi Theatre organises a two-month long activity around children play. As usual, this year I went to Gulzar saab and he wrote the play Pinocchio,” explains Salim. The play is an adaptation of the late 19th century children’s novel The Adventures of Pinocchio by Italian writer Carlo Collodi. The play, which is in Hindustani language, is set in verse and interspersed with songs. “During the summer holidays, while children enjoy themselves, I sit and prepare myself and wait for Salim’s call,” Gulzar jests.

On a serious note, he points out that children literature has often been neglected. “We have not done enough for out children because we often take the easy was out by ordering them what not to do. But a story is Pinocchio is such a great lesson for adults,” he says.

“Carlo has done such a great job by revolving the story around a nose. The most distinguishing feature of Pinocchio is his nose, so I have written a song called Naak. There are so many words that rhyme with the word naak like khatarnaak, naamnaak, hairatnaak, which I have used in the song. I believe the children will like the song,” he adds. His famous collaboration with Vishal Bhardwaj — Jangal jangal pata chala hai — the Jungle Book title song has been an anthem for the children and adults alike since the very first time the episodes were broadcasted on Doordarshan.

To have someone like Gulzar as a guide and collaborator is always a boon, admits Salim. “I have been working with him for almost three decades now,” he says. Salim has been an accomplished designer in many of Gulzar’s films.

Lubna Salim has designed the costumes, which she single-handedly stitched and made from scratch. “Since nobody was interested in helping, I had to take the daunting task on myself,” says a smiling Lubna. To create out-of-the-box costumes, she says she refrained the lure of the common. “I have tried to bring in some newness to the costumes,” she says. With Sudeep Banerjee’s music and choreographed by Srikant Ahire, the play is set premiere on Saturday.

However, according to Gulzar, the star of the play is the 12-year-old Shreya Acharya who is playing the role of the protagonist. “She is exceptional in the play. It’s as if she was born to play the role of Pinocchio. And even adults should come and watch the play because sometime it worth becoming a child again,” he concludes.