A film on molestation wins 12 awards

The film’s story and screenplay have been written by Sunil Kapoor, a noted income-tax advocate from Delhi who has also acted in a film. 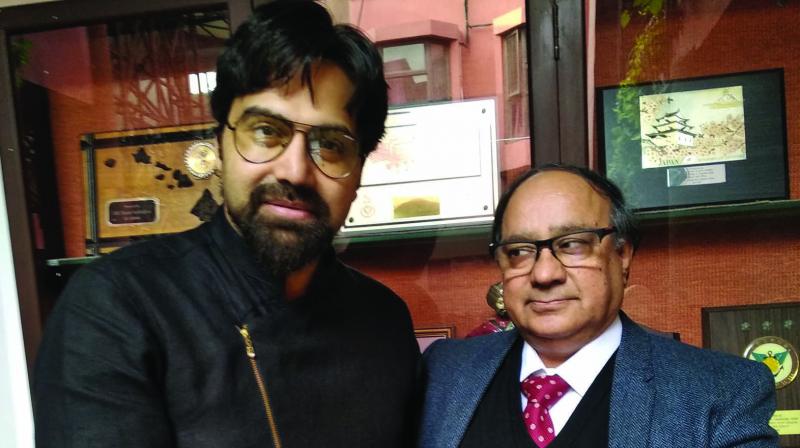 New Delhi: “It’s in my genes,” says a suave Suujoy J. Mukerji, the son of legendary actor and filmmaker Joy Mukerji, crediting his creative leaning to his family of actors and producers.

As he accepts appreciation for his debut directorial short film Ab Mujhe Udnaa Hai (Let Me Soar High) that captures the triumph of a molestation victim and her family over stigma and agony, he is quick to remind, at the screening of his short film in Delhi, that society as a whole needs to join in the effort to help victims of sexual abuse and crimes to regain their confidence and join the mainstream.

The film that has won over a dozen awards, national and international, including the best film award at the UK’s Red Wood Film Festival, Top Shorts, Los Angeles, and Calcutta International Cult Film Festival, sensitively handles the complex issue of stigmatisation of the victims of sexual offences and seeks to educate and empower society to make the nation a safe place for daughters.

“As the nation remembers Nirbhaya on her sixth death anniversary, it is time to help victims of sexual assaults and molestation and their families to emerge from trauma without stigmatisation,” says Suujoy, flashing the trademark smile of his tall and handsome father who ruled Bollywood for more than two decades starting 1960.

The 35-year-old scion of Mukerji family and director of Filmalaya Studio says that the 24-minute film, depicting the ordeal of a college girl who emerges from the lows of molestation, also features veteran actor Kanwaljit Singh who won the jury award for best actor at the Mumbai Film Festival. He won the award for essaying the role of a college professor and a molested girl’s father who believes in keeping pace with the changing times and encourages daughters to fulfil their dreams and potential.

The film’s story and screenplay have been written by Sunil Kapoor, a noted income-tax advocate from Delhi who has also acted in a film. Four stories from Mr Kapoor’s best-selling book, A Peacock Feather, have been picked by Bollywood producers for making feature films.

Suujoy, who is excited over the great reviews his debut short film has got, says that the film puts the spotlight and glorifies the woman who displays unflinching courage to overcome trauma.

In his message to the organisers of the 7th Delhi Shorts International Film Festival, where the film won the Certificate of Excellence, Suujoy said the appreciation for the film in the city where the Nirbhaya incident took place in 2012 means a lot to him.

“It was an event where we got to meet various film lovers who have the potential to change the face of world cinema,” said Suujoy, who has just returned from Kolkata where the film won the Virgin Spring Cinefest’s Golden Galaxy award for best film.

Suujoy takes pride in being the third generation of filmmaker from the lineage of Sashadhar Mukherjee to Joy Mukerji and says he has tried to learn from his family members and through his acting stint in three films.

Ab Mujhe Udnaa Hai chronicles the life of a college girl, Devika, who musters up the courage to erase the nightmarish experience and start afresh by resuming college studies and dance after the incident.

Suujoy says the film delicately captures the crucial role played by Devika’s peers and dance trainer, a role essayed by Mithun Chakraborty’s son Mimoh, who inspires her to come out of the shadows and soar high.

Apart from working to modernise Filmalaya, Suujoy is aiming for a Web series based on a story written by

Mr Kapoor and working on a project to present his father Joy Mukerji’s super hit Ek Musafir Ek Hasina in a contemporary avatar while retaining the essence of its songs. “The future is exciting,” says Suujoy, in his parting words to the city which is home to a number of his relatives.