Modern Love serves up lessons in finding love during times of compromise and cynicism. 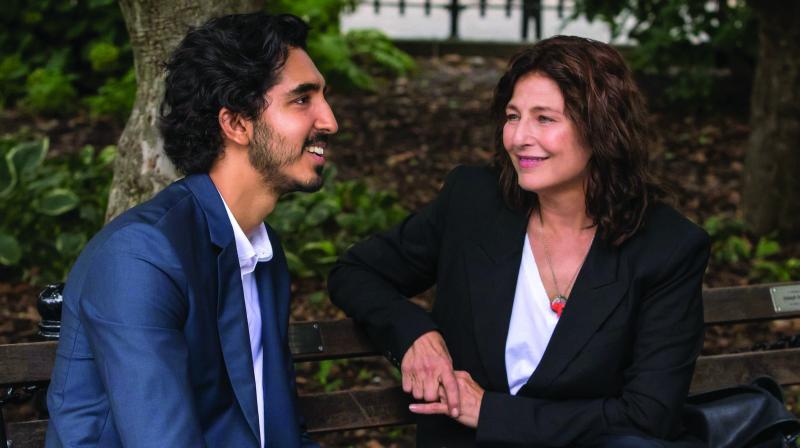 A scene from Modern Love
Rating:

Easily the best series I’ve seen on the OTT platform, Modern Love is an ambrosial anthology of eight episodes portraying love in all its splendour, sometimes slender, sometimes hard, but always tender and revealing, each episode has the stand-alone emotional strength of being a full-length feature film.

And the perk, one may call it that, is the  city of New York looming unobtrusively  over the stories like a silent narrator, hovering gently over the fate of anxious characters who are so relatable (thanks the exquisite performances), rejuvenate the entire romantic genre filmmaking.

How do I pick my favourite from this  beautiful bouquet of romance? Well, if you insist, it would have to be the first story ‘When The Doorman Is Your Main Man’ where a young single privileged girl (Cristin Milioti) in a posh highrise of NY is parentally protected by the building’s doorman (brilliantly ‘played’ by  Laurentiu Possa). This is the most epic story in the omnibus. It says so much about the intrinsically indefinable nature  of human bonding, while keeping the core  relationship unconditionally free of innuendos. This is the story that moved me to tears.

The least moving of the stories, though no less articulate, is ‘So He Looked Like Dad, It Was Just Dinner, Right?’ where Shia Wigham and Julia Garner do a  Lolita-redux with less than satisfying  results. Ms Garner’s own hormonal and emotional confusions do not help the plot to get to remain on its feet. Everything, from the exchanges between  father-figure and Lolita-remixed to the final outcome of  the sordid liaison, rings a little untrue.

But then, maybe that’s in comparison with the supremely poised calibre of the  series. No actor ‘plays’ a character. The word is an insult to what the actors do  here. The stunning Anne Hathaway is  exceptional as a bi-polar in ‘Take Me As  I  Am, Whoever I am.’ This is a one-woman show and Hathaway gives a career-defining performing showing the character’s periodic  descent into hell with heartstopping  tangibility. Hathaway is Oscar-worthy.

In ‘At the Hospital, an Interlude of Clarity,’ two young people who have  just met end up spending the night together at the hospital after the  guy is injured in a freak accident. The strength of this episode is not its performances (though Sofia Boutella, John Gallagher Jr are in full control of their characters) but in the conversation which shows how social media affects modern romantic relationships. This story opts for a dispassionate tone to reflect on the artificiality of  ‘Instagram’ portraits of real relationships.

In ‘Hers Was a World of One’ a gay couple (Andrew Scott, Brandon Kyle Goodman) deal with the wild nomadic mother of their child Olivia Kate Goodman). This episode is unconditionally charming. Stand-out performances by  Scott and Goodman and a bedrock of unquestionable humanism that runs through all the stories, defines the excellence of the presentation.

In comparison I found the episode ‘Rallying to Keep the Game Alive’ dry and  cold, perhaps  consciously so, as a wife trapped (Tina Fey) trapped in a stagnant marriage to a wry entertainment executive (John Slatterly) de-freezes her cold marriage with some serious therapy (therapist Sarita Chowdhary is one of the two  Indian actors in  the series) and casual soul-searching. This story of a failing marriag offers no  fresh insights as the narrative lumbered across repeated games of tennis. Some of the scenes in New York restaurants featuring intrusive characters seemed pointless.

Dev Patel as an entrepreneur who misses the love bus in ‘When Cupid Is a Prying Journalist’ is seen trying too hard to look love-stricken. The story has banal representations of  scenes from a sterile marriage that look like out-takes from Steep-De Niro’s Falling In Love.

What works here is that most of the story is shot on NY’s  Central Park which serves as a stabilising if not a motivating propulsive character.

Finally the story ‘The Race Grows Sweeter Near Its Final Lap’ about two autumnal  strangers  played wonderfully  by Jane Alexander and James Saito ,who  rediscover love at a late age. The story fills  the frames with sunshine  and reminds us of how  easy it is to  find love if you look with an open heart.

Sure, the stories have their flaws. Isn’t that how life is? There is nothing like the perfect relationship in today’s times. Modern Love serves up lessons in  finding  love during times of compromise and cynicism. Not to be missed. I can’t wait for Season 2.