Showers of chocolates, love for Thailavar 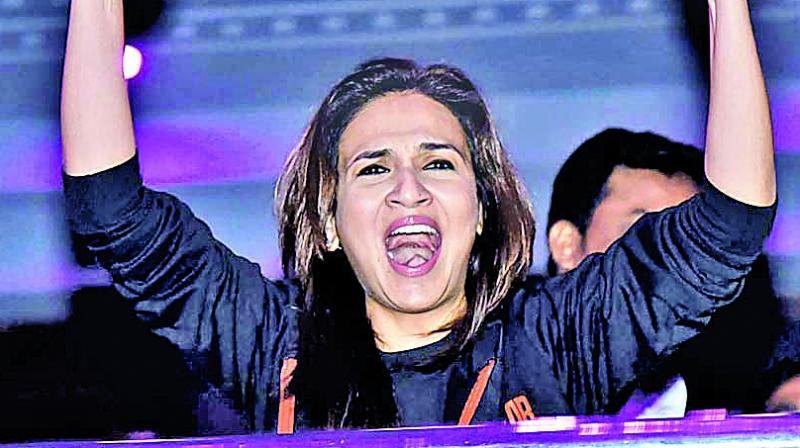 Soundarya Rajinikanth cheers along with the fans as her superstar dad’s film Darbar opens to full houses.

After Vijay’s Sarkar, looks like it’s the turn of Superstar Rajinikanth’s Darbar to set a new record. The film, which was released on January 9, six days prior to Pongal, has occupied all the screens of Chennai city.

Fans, in a bid to show their love and affection for their Thalaivar, erected mammoth cut-outs at vantage points inside various theatres. Since they were asked to refrain from performing paal abhishekam after the Milk Dealers Association complained a few years back that such practices create a lot of trouble for them, they performed ‘Chocolate abhishekam’ instead. Specially designed ‘flowerpot sparklers’ filled with chocolates were lighted, sending showers of chocolates of various sizes instead of sparks. The cut-outs were also adorned with chocolate garlands instead of huge flower garlands.

High-octane dances to the fast beats of melam, thaarai and thappattai set to songs from Darbar and cake-cutting ceremonies were held as part of the celebrations.

Rajini’s wife Latha, his daughters Aishwarya Dhanush and Soundarya Visagan and grand children Yatra and Linga, along with Anirudh Ravichander, Aishwarya’s cousin and the music composer of Darbar, were spotted catching the First Day First Show of the film at 3.50 a.m. at Rohini Theatre.

While Latha cheerfully waved to the audience, Soundarya had fan moments, cheering lustily for her ‘home team’, especially when Rajini’s intro scene came up on screen.

At Satyam Cinemas, Kanishk, a young fan of Rajinikanth, was spotted wearing a cop’s costume a la Aditya Arunasalam, the character played by the superstar in the movie.