On the pair of Vidya and Yuvraj winning the huge amount, the mother gives credit to her son’s general knowledge. 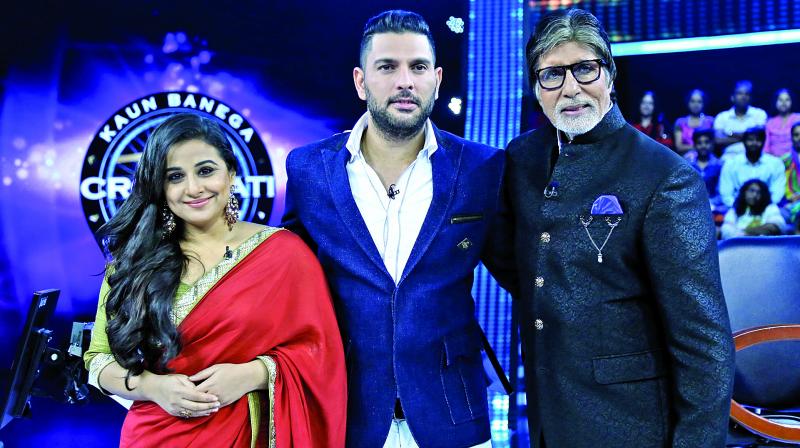 The cricketer, who is known for being stylish and good-looking, was seen sporting a new hair style, with a pony tail, on the show.

A doting mother and ace Indian cricketer Yuvraj Singh’s pillar of strength, Shabnam could not watch Kaun Banega Crorepati (KBC), where the Indian all-rounder appeared with film actress Vidya Balan on Tuesday, answered Amitabh Bachchan’s questions one after the other and won Rs 25 lakh. “I will watch it on Wednesday when the same episode is repeated,” said Shabnam over the phone.

On the pair of Vidya and Yuvraj winning the huge amount, the mother gives credit to her son’s general knowledge. “He does a lot of reading. That’s all I know. He reads a lot of books,” she reveals.

Before the duo started playing, Yuvraj announced that his prize money will be donated to his NGO, YouWeCan, a foundation established by the cricketer meant to fight cancer by spreading awareness about the fatal disease. He also became emotional when he was fielded questions about his fight against cancer. While sharing his experience, the 35-year-old cricketer did not forget to mention his mother’s name who was his biggest support system ever since Yuvraj was first diagnosed with the deadly disease and she even accompanied him to USA for the treatment. Yuvraj also spoke about the contribution of his father Yograj, who helped him on his journey to becoming a national player and who has himself played for the country.

Interestingly, during the show, which lasted a little over an hour, only one question on cricket was asked. “Which of these Indian captains has never scored a double century in Test cricket?” Taking very little time to answer, Yuvraj chose Mohammad Azharuddin among the other three options — Sunil Gavaskar, Sourav Ganguly and MS Dhoni.

The cricketer, who is known for being stylish and good-looking, was seen sporting a new hair style, with a pony tail, on the show. “His pony tail has been there for quite some time. No idea how he thought of this style. I have not seen him for quite some time now since he’s in Bengaluru for training right now,” said Shabnam.