Conflicts in the Moonlight

In Abhishek Majumdar’s meta-play Kaumudi, varied themes come together to pose questions about ethics and the medium of theatre. 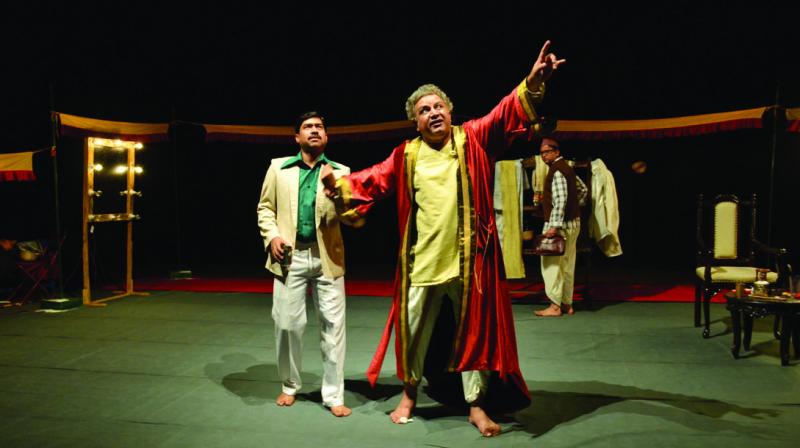 In what forms a premise of the playwright and director Abhishek Majumdar’s meta-play Kaumudi (Moonlight), varied themes come together to pose questions about ethics and the medium of theatre.

In the early 1970s, when the emergence of a rather vivacious cinema was casting its annihilating shadow on the theatre stages of India, Satyasheel (Kumud Mishra), a thespian from Allahabad had more to worry about. The veteran was not only losing his eyesight at a rapid pace but also his estranged son Paritosh, who was refused the tutelage of his father, returns as a thespian himself. If the duel of egos between the father and son were not enough to heighten the tension, the duo also had to perform together in a play, essaying Eklavya and Abhimanyu, respectively. In what forms a premise of the playwright and director Abhishek Majumdar’s meta-play Kaumudi (Moonlight), varied themes come together to pose questions about ethics and the medium of theatre.

Inspired by Jorge Luis Borges’ autobiographical essay Blindness and Anand’s Malayalam novella Vyasam Vigneswaram, Kaumudi is Abhishek’s honest exploration of the effects of the rangmanch in the lives of actors. When Satyasheel, known for his performance in the play inspired by Mahabharata, has to share the stage with his son whose intent is to overthrow his father, several questions come to the fore. Talking about it, Abhishek reveals, “The play is about what happens in those three nights when Abhimanyu and Eklavya meet on the stage when they already have a back history. So it’s about the questions of personal and public ethics, caste (a lower-caste Eklavya giving a sermon to an upper-caste Abhimanyu), and, very importantly, it’s the question about the theatre. The play itself is a question of a theatre. Is there truth in it or is there a lie? What’s the function of the medium?” 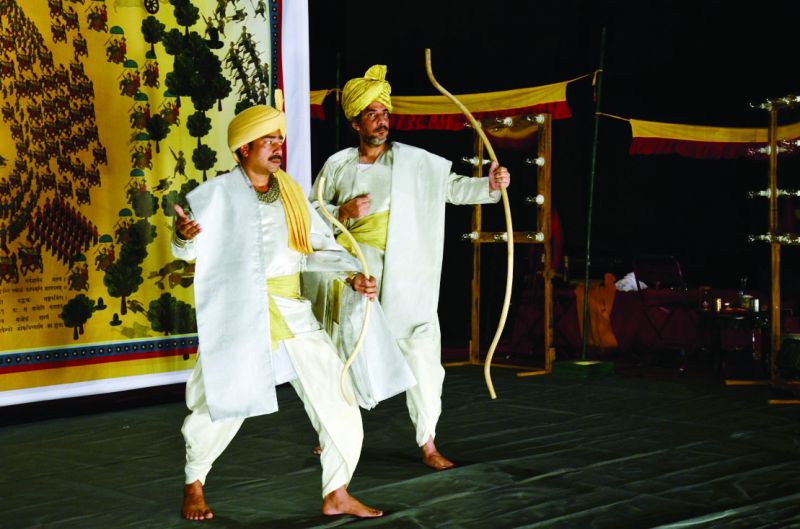 Having worked in theatre for a long time, Abhishek’s inspiration to explore an estranged personal relationship arrived from observing the artists around. “The father-son conflict between the blood is as a strong as the conflict between an art form. As an artist, one’s continuously learning through his art. But at the same time, many artists in the world, have had very difficult personal lives for varied reasons,” he says, adding, “What does Mahabharata really mean for Satyasheel, who had its wisdom, but that’s actually the reason why he would find it difficult to relate to his son. That dichotomy is interesting.”

Further, throughout the play, there is also an undercurrent of conflict between tradition and modernity. As a younger, modern and healthier Paritosh stands before the aging, traditional, and blinding Satyasheel, one witnesses the essence of changing times. However, Abhishek warns that it’s not always necessary that what comes later is more modern. Extrapolating on his point, he illustrates, “We see something that appeared later is more modern than something which appeared earlier, but in the arts that is not true. For example, Kathakali is incredibly more modern than most of the Hindi cinema. In Kathakali, you can question God, while in Hindi cinema you can’t. So when we say modern, generally, we think of being more rational and philosophically more acute than the traditions. We assume that the history of thought should lead to modernity from tradition.”

While the distinction between the play and the play within the  play is brought out by the prowess of sound designer Abhijeet Tambe, who has invented different sounds for the play, play within the play and the outside, the characters also speak three types of Hindi in the three different settings. “It was largely sound, stage design and the style of acting that determines the distinctions,” concludes Abhishek.

The play will be staged on June 15 and 16 at Prithvi Theatre.