Nalanda is a non-profit public trust and undoubtedly a premier institution enjoying a unique position in the world of dance and education. 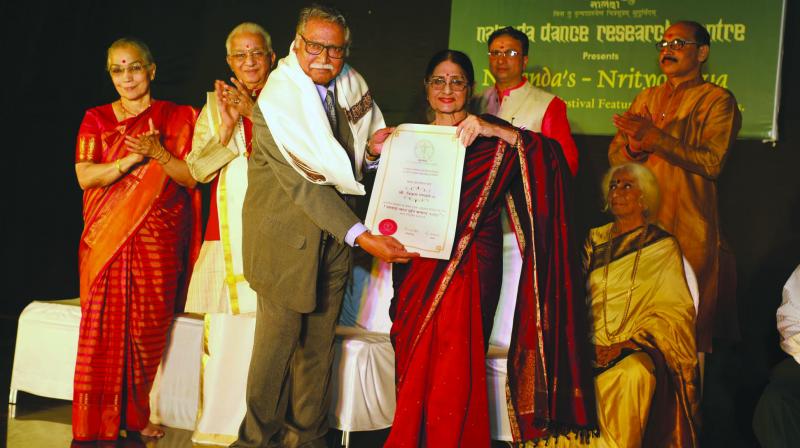 Nalanda Dance Research Centre is an officially recognised research institute by the ministry of science and technology, Government of India, the only dance institution to get this recognition.

When we talk of learning dance in a complete, wholesome and structured manner, one institute that always crosses our mind is the renowned Nalanda Dance Research Centre in Mumbai, spearheaded by Padma Bhushan Dr Kanak Rele and her highly talented daughter-in-law Dr Uma Rele.

Nalanda is a non-profit public trust and undoubtedly a premier institution enjoying a unique position in the world of dance and education. This institute that follows the guru-shishya parampara was established in 1967 by the renowned Mohiniattam dance exponent and scholar, Dr Kanak Rele, as an institution to impart traditional training in classical Indian dancing. Nalanda blossomed by 1973 into a unique three-tiered institution with foundation classes for pre-university children, “Nalanda Nritya Kala Mahavidyalaya” a college of classical dancing affiliated to the University of Mumbai providing formal academic education and its different departments for post-doctoral and fundamental research.

Nalanda Dance Research Centre is an officially recognised research institute by the ministry of science and technology, Government of India, the only dance institution to get this recognition.

But today I want to highlight another beautiful and giving side of Nalanda. Teaching and imparting dance knowledge is just one of the feathers in its cap. Almost a decade back, from 2011, Nalanda initiated a process of honouring individuals who have acquired iconic status by awarding them with the “Bharata Muni Samman”. At their renowned dance festival, Nalanda Nirityotsava, which is a four-day celebration of Indian classical dances.

Speaking of this award, Padma Bhushan Dr Kanak Rele said, “We at Nalanda believe that by honouring such artists we are honouring India on behalf of all Indians, hence the annual ‘Bharata Muni Samman’ and to encourage the youth we have the Nalanda Nritya Nipuna.”

Dedicated to the preservation and propagation of Indian dance in particular and Indian culture in general from its founding in 1966, the Nalanda Dance Research Centre has unswervingly trodden on its chosen path with single-minded determination. Nalanda has always upheld the pricelessness of all that is India and her great ancient culture which consists of the various performing arts, visual arts, the mother of all languages, Sanskrit and sanskritic studies, the religio-philosophical thought and other co-related facets.

Dancers from all over India took part for this year’s Nalanda’s prestigious title of Nirtyotsava, dancers from Maharashtra, Delhi, Bengal, Chhattisgarh, Karnataka, Assam, Kerala, Andhra Pradesh and many other states were seen showing their skills to bag the Nalanda Nritya Nipuna award.

Talking about the Nalanda Nritya Nipuna award for the youth, Dr Uma Rele said, “This year we had 21 highly talented participants in the Nirtyotsava, with a very high standard of performances, it was a difficult choice to make but after considering all the aspects of the dance presentation, the panel unanimously chose 12 dancers for the award”

Finally, at the end of four dances in a celebration of art and culture the following dancers won the Nalanda Nritya Nipuna award at the Nirtyotsava, 2019. Tamana Tanna for Odissi, Sukanya Kumar, Naveen R. Hegde, Shruti Ashokan, Divya Bhatt and Atanu Das for Bharata Natyam, Varsha Dasgupta and Priya Samarth for Kathak, Sandra Pisharody and Unnati Ajmera for Mohini, Kankana Singh for Manipuri and Ruchi Krishna for Kuchipudi.

Very passionately and fondly, Dr Kanak Rele spoke of this year’s Bharata Muni Samman awardees. She informed that Dr Prabha Atre is one of the seniormost and distinguished vocalists of Kirana Gharaanaa of Hindustani music. She is also a distinguished researcher and teacher. She is also well known for her meaningful insight and experimentation and innovations in treatment, design and presentation of the musical material. Whether in Khyaal, Taraannaa, Thumri, Daadraa, Ghazal or Bhajan, her total commitment to her art and sensitivity to the needs of the times clearly place her in the distinguished company of a very few thinking Hindustani vocalists. She is also acclaimed as a research guide at the university level.

The most beautiful part is that Dr Prabha Atre was trained in the traditional “guru-shishya paramparaa” by the Late Sureshbabu Mane and his famous sister, Padmabhushan Hirabai Badodekar, both stalwarts of the Kirana Gharaannaa. She also drew much inspiration from the styles of renowned maestros, Amir Khan Saheb and Bade Ghulam Ali Khan Saheb.

Dr Rele also informed that Dr Atre has authored academic books on various aspects which are relevant to research on musicology. She is the author of distinguished books having high academic value. Dr Atre has been honoured with the Padma Shri, the Padma Bhushan, the Sangeet Natak Akademi Award and the Tagore Akademi Ratna as also the Kalidas Samman, the Tanariri Sangeet Sanman, the Bharat Ratna Pt Bhimsen Joshi Shaastreeya Sangeet Jeevan Gaurav Puraskar and many more.

Dr Rele happily spoke of her association with Shanta and Dhananjayan, while honouring them she said that, “The dancing duo have carved a unique place in the field of Bharata Natyam. Both, husband and wife are distinguished as exponents of traditional Bharata Natyam for nearly six decades. Superbly trained and distinguished in the Kalakshetra Baani, they are also acclaimed for exploring new themes and movements without compromising on tradition.”

She went on to say that, “The dancing duo exhibit high reverence for traditionalism in their art and have today become role models for the younger generation. Due to their devotion to their art, the high standard of teaching and meticulous moulding of the sensibilities of their vast number of students, they enjoy a unique position in the field of Bharata Natyam.”

Renowned for their professional stage partnership, both Shanta and Dhananjayan are also trend-distinguished soloists. They are the co-founders of the well known Bharatakalanjali Institute of Bharata Natyam where they choreograph and present group presentations. The Dhananjayans are well known as trained setters in the field of Bharata Natyam for having brought a fresh approach to the choreographic innovations and creativity within the traditional framework.

Most ecstatic to give away the honour to Vikram Gokhale, Dr Rele said that the highly talented actor is well-known as a serious stage actor for his rendition of diverse roles in Marathi theatre and Hindi films. A worthy scion of the eminent Gokhale family, he is the son of the doyen of Marathi theatre, Chandrakant Gokhale and Hemavati Gokhale.

His contribution to the world of Marathi and Hindi theatre is unparalleled with more than 30 professional theatre productions, in both languages — Marathi and Hindi. Few people have been able to achieve success in different media as Vikram Gokhale. The sheer repertoire of this versatile actor — be on the stage or the big screen — is memorable.

Gokhale is also a committed teacher for the students of Media. He teaches “Science of Dramaturgy” in the University of Pune and in the Deccan Education Society, Pune. His students are spread not only in India but abroad as well, where he regularly teaches. He works relentlessly for the cause of social welfare and the upliftment of the weaker sections of the society for the last 35 years as chairman of the Kamalabai Gokhale Public Charitable Trust. His efforts have been in the direction of care and betterment of the disabled soldiers of the nation and the underprivileged sections of society.

Nalanda is a highly recognised research centre. It recognises and appreciates all those endeavours that probe deep into the all encompassing cultural phenomena of this great country. Very naturally these endeavours come from the most dedicated individuals who not only delve into this vast ocean that is Indian culture but also have the intellectual calibre to unravel, re-interpret and re-invent this knowledge and wisdom to conform with their own times.

Today with this story I salute the unmatched work Dr Kanak Rele which she tirelessly has been doing for decades, just to keep the traditions of Indian classical dances alive and I wish good luck to the dynamic Dr Uma Rele for keeping the flag flying high and never letting any obstacle come her way.