Sacred aims from get go!

It’s the first Netflix original series from India, and the stars promise to enthrall with this new adaptation of a Vikram Chandra novel. 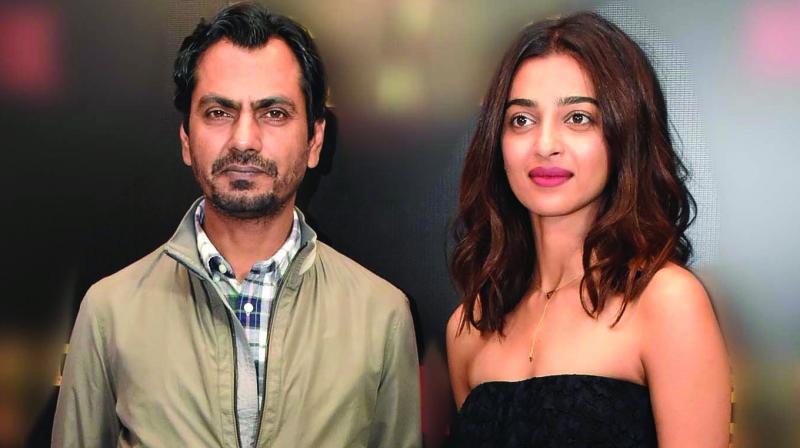 They are similar in more ways than one. Actors Radhika Apte and Nawazuddin Siddiqui share a common love for the unconventional, and it’s reflective in their body of work. After the 2015 release Badlapur; they will be sharing the screen space yet again. But this time, as part of Sacred Games, Netflix’s first Original series from India. From telling us how she couldn’t care less about BO and how Vikramaditya Motwane is her favourite, here is the insider info...

BOX OFFICE IS NOT AN ACTOR’S HEADACHE: A digress from mainstream cinema is a risk worth taking, believes Radhika Apte.”The job is the same. In fact, more people are going to watch. It has a really wide reach. The BO isn’t our headache anyway. It affects them hugely, but when something becomes a success digitally, it’s massive,” she says.  Vouching by similar lines, Nawazuddin Siddiqui feels trying his hands on a hugely popular digital platform only works in his favour as an actor. “A film is bound to many aspects. A digital medium eases you of that — there is an opportunity to understand, learn and break away from time constraints as it’s not restricted to just two hours, which is the case with movies.”

GREY CHARACTERS ARE MORE FUN TO PLAY THAN THAT OF THE HERO: “A character is no longer negative, anymore. The blatant baddie is a figment of the 90s. Nowadays, it’s all about perspectives. There are only grey shades to a character. And, honestly, these shades are the best to play as it leaves so much room for experimenting, imagination and arouses a sense of intrigue to be, that supersedes the role of a hero or a protagonist. The clear demarcation between a hero and villain has dissolved,” states Nawazuddin.

‘WE HAVE PLAYED IT REAL’:  Hinting at how the team has kept it frills-free, Radhika adds, “A lot of research went in to understand what are the struggles faced by a woman Raw agent who wants to be a field agent. About how it affects her personal life. To be working in an industry laced by patriarchy. We have played it very real. It is very underplayed and very realistically played. So no unwanted drama!” The series has two directors on board, i.e. Vikramaditya Motwane and Anurag Kashyap. Looks like Radhika has her favourite. “I think my biggest takeaway from the show is to have had the opportunity to work with Vikram. He’s a very sensitive director, who knows how to treat his actors.”

For an actor, it is imperative to go to great lengths and do justice to a character. And, the ability to gauge the potential lies within the director.

‘NO MESSAGE’: “You make movies or series to tell stories. The message you derive out of it is truly interpretational. I don’t think there is a necessity to send out a message with every content that sees the light of the day,” Radhika opines.

For Nawazuddin, the process had paid. “I don’t think it’s wise to break my head over things I cannot control. I would love for people to come and stream it, but to me, it’s all about enjoying what you do. And, this time around, I’ve got my due,” he signs off.

Sacred Games
The series, which is an adaptation of Vikram Chandra's book Sacred Games essays the nexus of connection in Bombay. It interweaves and highlights the disparities in the lives of individuals hailing from varied classes. The show reveals the different worlds under one roof: for instance, how the worries of the rich are strikingly different from the worries of those who work for them