Recapturing in Sanskrit, Pali and Hindi the old vibes of India’s total theatre

The familiar theme — and the scene of Sakuntala, trying to convince Dushyanta in a state of amnesia, that she is his wedded wife, was very moving. 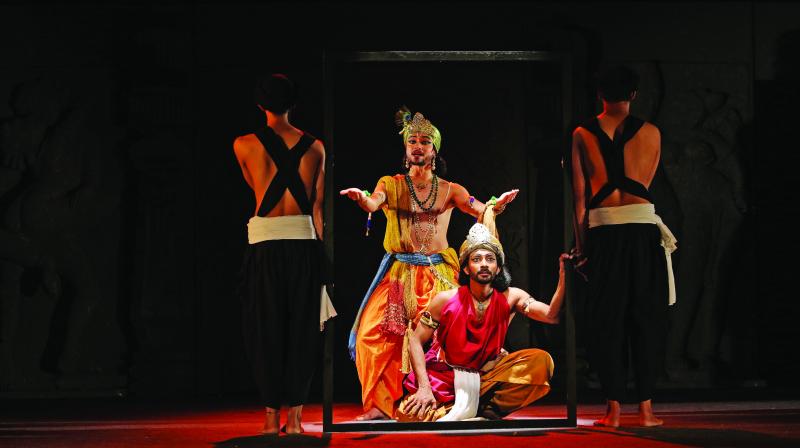 While great western minds like Goethe and Forster have eulogised Kalidasa’s Abhijnanasakuntalam as a jewel in the world of drama literature — “kavyesu natakam ramyam tatra ramya sakuntala”, for some of the lofty minded in India who scoff at Sanskrit for being a dead language which few Indians can relate to, the evening at the Convention Hall of the Jawahar Lal University, where Kalidasa’s Abhijnanasakuntalam Natakam in its Sanskrit and Prakrit version was staged, would have proved an eye-opener. Titled Rasa-Kirti, The Natakam, a joint venture by the Jawaharlal Nehru University and Satraranga (a Trust for Cultural Relations) celebrating the golden jubilee year of JNU, it was an exceptional experiment at several levels.

The presentation was based on the Kashmiri Shaaradaa script (the first descendent of the Brahmi script of Ashokan inscriptions) ascribed to the seventh century and the oldest of the known recensions of the work in other scripts like the Maithili, the Bengali, the South Indian and the Devanagari (the last being the shortest and the most popular was created in as late as the 16th century).The entire credit for discovering and procuring this script after years of search, and critically editing it, goes to Prof. Vasantkumar M. Bhatt whose herculean task apart from tracing recensions from the script written on birch bark preserved in the Bodleian University and one at Bhandarkar Oriental Research Institute at Poona amidst others finally succeeded in procuring the Shaaradaa version referred to by ancient Kashmiri scholars like Vaamana, Aanandavardhan and Abhinavagupta of Kashmir, Bhojaraja of Madhya Pradesh and Hemchandra Acharya of Gujarat. That this most authentic script of Abhijnanasakuntala Natakam should be staged in the Sattriya form in the typical Ankia-Nat performance tradition created by Sankaradeva and followed in the Sattras, under the direction of Dr Babhananda Barbayan of Uttar Kamalabari Sattra, made this a unique occasion. The Satraranga is also introducing Citrabhagavata through a panel of paintings by Rajib Kakoti on Abhijnanasakuntalam.

Sankaradeva being primarily a preacher whose literary works spread his ekasaran dharma, a play like Abhijnanasakuntalam needed some adjustments, its literary Sanskrit excellence different from the Vrajaboli (with the sutradhar using Sanskrit) language used by Sankaradeva in what he called his natakas, based on Krishna episodes from the Bhagavata Purana.

The play in the traditional Ankia Bhaona pattern in Vrajboli and Assamese had its Purva Ranga in the typical Sattra tradition with Dhemali — with the Gayan-Bayan troupe comprising rhythm keepers, six playing the Khol with two keeping time on the Khartal in the rear — all artists from the Uttar Kamalabari Sattra, being led by Prof. Bhabananda Borbayan. The absorbing rendition simultaneously combining Khol playing with specified foot movements and chalis with hands held in hastas was charged with vivacity, while exuding an all-pervading inner serenity.

After the Purva ranga the shloka in Sanskrit followed with the sutradhar or sutradhari in this case, entering, explaining the shloka and the situation in the play. Sutradhari Naach had typical Sattriya dance movements, though in original Sanskrit natakam, the sutradhar’s introduction is largely through gestures or hastas. The narrative began with hero Dushyanta, while hunting, straying into an ashram in the process of chasing a deer — to be firmly told that on this non-violent soil, killing animals was prohibited.

The dance in the narrative as one of the main components was of a muted character — with foot movements, and gaits for different characters, postural changes, hand gestures and facial expressions — and less of vigorous sweeping over stage space with intricate footwork, barring occasions.

The language teaching experts did a wonderful job with the spoken Sanskrit diction. Abhay Singh as Dushyanta was impressive as was Pragya in the role of Sakuntala. Jhilmil Pathak and Sumanya Kashyap as Anusuya and Praiyambada and the other two maids, also excellent singers, impressed. Actors as the deer and the lion were quaint. But above all in the sheer expertise of enactment was Sanjay Yadav as Vidhusaka, his malleable face mapping every moment beautifully (in original Ankia Nat plays, a regular character like the jester, so typical of Sanskrit theatre, was absent — though post Sankardeva particularly, some regular characters were given a comic dimension.) 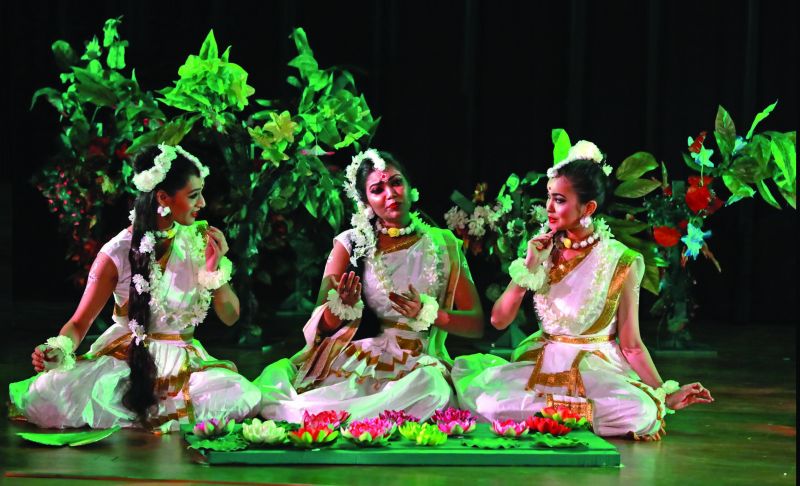 The familiar theme — and the scene of Sakuntala, trying to convince Dushyanta in a state of amnesia, that she is his wedded wife, was very moving. After involved circumstances result in the ring that had slipped from Sakuntala’s finger reaching Dushyanta, recollection sets in with deep remorse at the harm done. Once again on the Ashram territory, he sees young Bharat playing with a lion cub — and finally comes the recognition that this is his son — and reconciliation. Simple props like a movable tree, round which so much action takes place, flower pots, elegant white arches formed by pleated white cloth strung between two poles suggesting the palace interior, were very imaginatively conceived.

Most impressive and contributing handsomely to the performance tone was the music — in the typical Assamese style with words in Vrajboli — even while the spoken dialogue was in Sanskrit and Prakrit. And right from the start after Hari Bol, starting with raga Saranga, music it was that evoked the required mood and state of mind. Vocalists Dibakar Das, Dr.Rishiraj Pathak, Rinja Risa Kaushik, Sumaya Kashyap, led by Bhabananda Barbayan on Khol assisted by Mridanga and Khol by Niranjan Saikia Bayan, Govinda Kalita bayan and Manto Baruah providing soft cymbal taal, and the very melodious flute and violin interventions by Bitual Duwari and Dwipendra Sarma made for a truly sensitive combine.

Barring the odd whistle and catcall, which one puts down to an exuberance of animal spirits of youth, the complete attention in which the proceedings were watched by the packed hall of students, was a feather in the cap of the actors, and kudos to the JNU authorities for thinking of an effort of this nature for the centenary celebrations!

The week’s similar aesthetic continuum in the Natya Shastra style of enactment based on “Karna Gatha”in Hindi by playwright Asif Ali Haider Khan, saw a power-packed presentation at Abhimanch by the second year students of NSD — the play designed by Rita Ganguly with her visualisation, choreography, music, design and direction.

Sanskrit theatre combining the heard (sravya) and the seen (drishya) was described by Bharata in his oft quoted statement in the Natya Shastra “Na tajjaana natacchilpa na sa vidya na sakala (There is no wise maxim, no learning, no art or craft, no device, no action that is not found reflected in drama)”. Natyam as bhavanukirtanam is not reality but an aestheticised concept, and an art construct of universalised mental states of being. The idea of sadharanikarana or a process of universalisation and becoming one with this (tanmayibhavana) is what acting is all about, involving abhinaya which has four expressional modes — through the body (angika) through speech (vacika), true expression (sattvika) and through the costumed body with ornaments (aharya) setting in motion an entire process enabling the actor’s alienation — becoming one with the role stepping away from his persona. Abhinaya through hand gestures plays a very important role. Rita Ganguly’s imaginative choreography, in the excellent movement visualisation had a minimalism — like a few Chhau Hathyadhara steps accompanied by Kunhiraman’s Chenda rhythm evoking the feel of a whole edifice of a bitterly fought war. Along with wonderfully designed costumes by Dolly Aluwalia Tiwari carried with easy grace by the actors, and Kajal Ghosh’s superb music arrangement with the bhav-soaked singing and percussive interludes creating mood, and above all Souti Chakraborty’s light designing — all came together to create magical feel of a bygone era.

The entire auditorium ambience with Ajanta paintings on the wall and delightfully envisioned set executed by Sagnik Chakraborthy set the tone for the Natya Sastra mode of Purvaranga, Nandi with the important character’s Praveshika with Jarjara Sthapana to ward off all evil with Rita Ganguly’s voice on the sound tape singing Saraswati Vandana“Ya kundendu” in Shivaranjani, followed by Ravana’s ‘Prachanda Tandavam Shivam’ slokam.  Prerna Joshi as sutradhar introduced the characters.

Characters appearing hidden behind the tiraisheela (screen held on both sides) made for some indelible images like the feet underneath moving in excellent rhythmic coordination, or just hand gestures and mimetic faces above the curtain telling the story.

Actor Vikas as Karn, with his perfect ardhamandali stance many dancers would be proud of, evocatively underlined the melancholia and aloneness of his existence. In a uniformly well-directed cast, one specially appreciates Bhushan Sanjay Patil who as Karn’s horse was out of the ordinary. Quivering nostrils, with feet shuffling or in a canter or a gallop, he became one with his character.

The tempo never sagged in a smoothly moving narrative — so painstakingly rehearsed were the actors in what was not their usual theatre form. Kudos to the entire team!