There were 22 Vietnamese films on view at the festival. 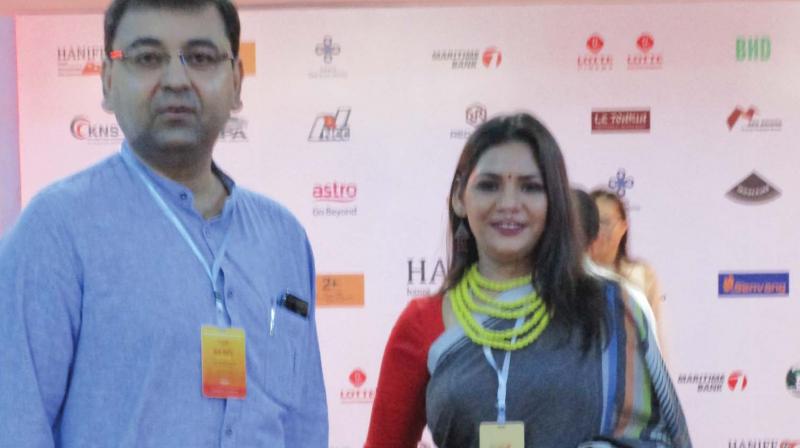 Director/actress of Indian film Pupa Indrasis Acharya, which was in competition.

Hanoi: The fifth Hanoi International Film Festival (HANIFF), which ended last week, is held once in two years, and has come a long way since it was started in 2010, with 60 films from 22 countries.

This year, it had nearly 150 films from nearly 50 countries, not to forget two country Retrospectives (Poland, Iran), a Project Market (with scripts from five countries in the Asia-Pacific region, including Vietnam, which won the project-funding) a HANIFF Campus, with Master-classes for young Vietnamese film professionals, by well-known film artistes like Lord of the Rings actor David Wenham.

“The aim of the Festival is to build a film culture in the country,” said Dr Ngo Phuong Lan, director general of the Vietnam Cinema Dept, that plans and executes the whole festival. She has been director of the festival since 2012, but has been working in the Cinema Dept for nearly three decades, which has kept her closely connected to the film industry in the country.

Ms Ngo informed that the Vietnam Cinema Dept formulated all the policies of the film industry, from censorship, to film-funding to foreign location-shootings. One of the highlights of the Festival was an exhibition at the host Daewoo Hotel, of the various lush location-spots in the country.

In fact, the foreign guests were taken on a tour of the lush Ning Binh province, 100 km outside Hanoi, which boasted of mountains, lakes, and even a newly-built pagoda and stupa with gorgeous Buddha images. This was the location of the Hollywood blockbuster film Kong: Skull Island.

Meanwhile, there were 22 Vietnamese films on view at the Festival. Many were commercial, some were free adaptations of Korean movies, a country they deeply admire. In fact, the film that won the People's Choice Award was My Mr. Wife, based on a Korean movie.

Among the noteworthy Vietnamese films was The Tailor, which wonderfully combined fashion, culture, family drama, and is the country's nomination for the Oscars, this year. Another interesting Vietnamese film Summer with closed eyes, had a brand-new team including director, producer and cast, and was a rare example of a youthful film that reached out to all ages.It was a commercial hit, and created waves at the Festival by winning the Best Actress Award for its debut star.

The Best Actor Award went to the Philippines film Signal Rock, while the NETPAC Award for Best Asian Film went to the Korean movie The Student.

The prestigious Best Film Award went to Dark Room from Iran, bringing great joy to its director Rouhollah Hejazi, who had to fight hard to raise money for the film, and finally managed it through friends and bank loans.

“We are the new generation film-makers from Iran, who have problems getting finance for our movies, since we don't want to say the same old stories as before.” said the director with candid honesty.

At a seminar on Iranian Cinema, noted Iranian film distributor Muhammad Atebbai spoke with stark frankness too, referring to the “The three types of film festivals prevalent today — legitimate, pseudo, and fake festivals!"

With the same vein of honesty, he stated that although the Iranian film industry sympathized with well-known film-maker Jafar Panahi, who had been placed under house-arrest by Iran’s government, he had become a “privileged” film-maker who continued to secretly make movies, and be welcomed by film festivals, at the expense of many others in the country.

The seminar with Poland, the other country in focus, discussed ways of collaboration and co-production with Vietnam, and was represented by a large Polish delegation. In fact the Best Film Award was won by the Polish film Silent Night. One heard that the Polish movies screened at the festival would travel to other cities in the country, like Saigon.

In spite of censorship regulations, the Thai short film, When Smoke Collides, a delicate “gay” story, and Indonesian film Salt is leaving the sea, a controversial story of a Christian nun (played by a Muslim actress) falling in love, were screened to appreciative audiences.

The director of the latter film Robby Ertano was not sure if his film would get a public release in his conservative country!

Other noteworthy movies were Insane Mother from Mongolia, starring the country's top actress, The Name from Japan, about the communication problems of the contemporary youth, Searching for Kafka from Taiwan, by a well-known Chinese novelist Jade Chen, which was also screened at the Shanghai International Film Festival, and Pale Folk from Serbia, which won a special Jury Award.

There was one Indian film in the Competition section, Pupa, the second feature film of Bengali director Indrasis Acharya. It was an old-age Bengali story set in a traditional Bengali household, centering around a series of family tragedies. It was very realistic but also very dark and relentless, the main highlight being a noteworthy performance by actress Sudipta Chakraborty, who attended the Festival.

At a press conference, the Vietnamese journalists were amused when the Indian director told them of a popular saying about Vietnam, during the Communist era in Calcutta — “Your Name, Our Name, Is Vietnam!”

The second Indian film at the festival, was Painting Life by well-known Kerala director Dr Biju Kumar Damodaran. It was set in the lush landscapes of Sikkim, and was an interesting story in the English language, with an all-Indian cast, including from Sikkim and Arunachal Pradesh.

Silicon Valley engineer-turned stage and screen actor Prakash Bare, who plays the lead, attended the Festival and told this writer that “English” was deliberately chosen as the language of the multi-theme film, because the film had a cast from different parts of the country, all of whom were connected by the common language of English. The Bangalore-based actor said he was presently researching on the famed journalist Gauri Lankesh, and planned to make a biopic on her.

“India” was the “country in focus” at the Festival last year, and Festival director Ms Ngo informed that 10 Indian films were screened, which were enjoyed by the Vietnamese audiences.

She was proud that nearly 10,000 people attended the film screenings at 10 theatres this year, which was a big increase in numbers.

Young Vietnamese film-maker Ho Thanh Thai stated that the Hanoi Film Festival was their best exposure to world cinema, which was why it was an important festival for the country.

One was happy to meet many vibrant and articulate film-makers from the country, including the famed, veteran director  Dang Nhat Minh, US-based Vietnam director Ham Tran, the director-actress couple of the film 200 Pounds, James Ngo and wife, the film-maker-son of the Festival director, Dinh Tuan Vu, and the dynamic woman film-maker Nhuyen Hoang Diep, whose movie Flapping in the middle of nowhere was screened at many international festivals.

A major highlight of the Festival, were the spectacular cultural programs for the opening and closing events, which portrayed the rich culture and history of the country. The stunning sets, lighting, sound design, were proof of the various advances made in hi-technology.

One was also impressed by the English-language skills of the 200 Student Volunteers who accompanied the foreign guests.

Judging by the Hanoi International Film Festival, it looks like Vietnam will be a powerhouse for the future, and not just by its cinema.