Kalki, with her almost boyish charm and out-of-the box choice of roles has carved a niche for herself in the industry. 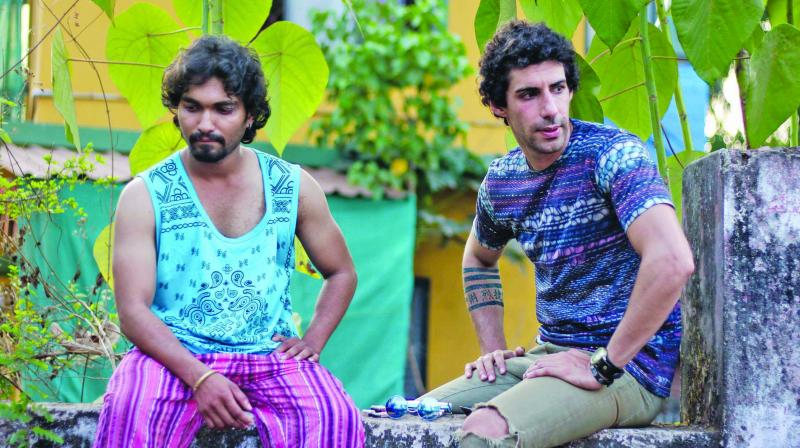 A still from the web series Smoke.

A crime drama, Smoke, that films the underbelly of Goa, is the only Indian web series to be showcased at Cannes this year. The mafia thriller that involves politicians, the police and the entertainment industry of Goa stars a diverse ensemble cast of Kalki Koechlin, Mandira Bedi, Jim Sarbh, Amit Sial, Gulshan Devaiah, Satyadeep Mishra, Neal Bhoopalam, Prakash Belawadi and the late Tom Alter. We got in touch with two of the best unconventional gems that Indian cinema has to offer at the moment-Kalki Koechlin and Jim Sarbh.

Kalki, with her almost boyish charm and out-of-the box choice of roles has carved a niche for herself in the industry. The national award winner has impressed the critics with her craft time and again and films like Margarita With A Straw and Waiting have managed to ward off the naysayers quite justly.

Jim, on the other hand, is grabbing eyeballs with his shady characters that verge on the psychotic. Characters like Khalil in Neerja and Mallilk Kafur in Padmaavat have been lauded far and wide. Even Ranveer Singh has gone on record saying that Jim’s character made him look good in Sanjay Leela Bhansali’s magnum opus. All eleven episodes of Smoke, directed by Neel Guha, will be available on Eros Now.

In interviews, the stars also spoke about the topic of the moment, which is the #MeToo movement.

JIM Sarbh Character in Smoke
I am the eyes and ears of the character played by Tom Alter. So he’s like his right hand man who knows everything that’s happening in Goa and has all the right connections. He’s quite loyal and loving actually.

On choosing shady characters
I think the nature of the series is that everyone is a shady character (laughs), I found it to be an interesting story and I wanted to act in it. I didn’t like it because it was particularly a shady one but because the story intrigued me.

Working with Director Sanjay Leela Bhansali
SLB is a great director. He has an eye for details. He really pushes you to be as interesting and as detailed and beautiful as the frames he creates and seeing those you want to do it. I personally like a tough task master who cares and seeing someone care so much for his craft makes you want to care as well.

Upcoming Projects
Made in Heaven is coming out next year, another web series that I look forward to, I am quite excited for the show. I also have some other films like Beneath A Sea of Lights that I shot in Dubai, and there’s another I have worked on earlier this year with Michael Winterbottom that also starred Dev Patel and Radhika Apte which premiered at the Toronto International Film Festival in September.

On wanting to work with other directors
I am interested in seeing Mard Ko Dard Nahi Hota by Vasan Bala so I would like to work with him and I also would like to work with Vikram Aditya Motwani, Abhishek Chaubey, Vishal Bhardwaj and Kabir Khan. I recently shot a cool music video for a Prateek Kuhad song with Zoya Hussain from Mukkabaz and was directed by the same person who directed us in Three and a Half—Dar Gai. I really like her as a director and Dheer Momaya as a producer so I would happily work with them in the future.

Jim Sarbh on guidelines
I think it requires a deep conversation. It’s an important movement and I support it. Guidelines are required to completely root out this problem. I think it also requires education and sensitisation programs that include sex education from a very young age. It’s important to provide people with easier forms of psychological help and emotional management programs at the workplace so that nobody has to go through something like that. These should be addressed at the lowest level of development that is from the time when you are a kid.

KALKI Koechlin Character in Smoke
I play a Dj from Portugal who comes to play in the clubs of Goa; she gets involved in the mafia and ends up becoming the mistress of the main don. And from then on it’s her story of finding freedom and escape from the dark world.

Working with director Neel Guha
He's fantastic as I have worked with him before, It’s really nice to see him to take the limelight and be a director he's very gentle and calm on the sets but at the same time he’s very thorough, he’ll tell you that this is what happens before 2 mins before the scene and 2 mins after the scene so that you have constantly got context to where you are.

Genres to explore
I never look at the genre; I look at the story and the character. I think the genre comes much later when people have worked on the edit and put the music together. When I read it I only see a story. I am an actor who wants to do everything; there is lots of thing I haven't yet explored like acting in a rom-com, biopic, or in an action film where I get to do some action. I would love to do some of that.

Web series Vs Cinema
Absolutely it poses competition to the big screen because there is so much content on the web but I think it’s a very healthy thing and I think that cinema would actually grow because of it and cinema will change and adapt accordingly.

Upcoming Projects
I have Gully Boy which is set to release in Feb, and then I have Made in Heaven which is a web series which is also coming out sometime next year and my play which is coming in the end of November.

Kalki Koechlin on norms
I think it’s a very important movement and it has spread far and wide in the nation. I see that a lot of questioning happening and a lot more awareness as well. Sensitisation workshops are taking place; documents are being put together for people to know about the guidelines what acceptable behaviour at a workplace is