Method to this madness

Norman knows what he is talking about. He was happily married to his wife for 46 years before she lost her life to the big C. 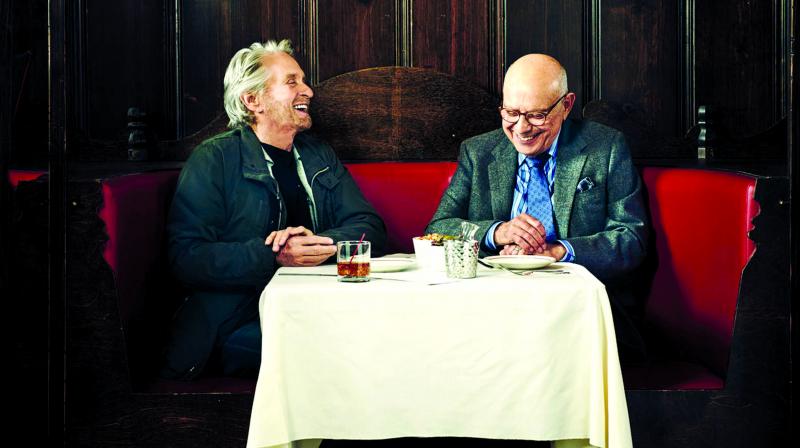 Two old men — Sandy and Norman — best friends share a camaraderie that is filled with sarcastic one-liners and caustic retorts. But the bond runs deep and forms the fulcrum of this happy-sad drama — The Kominsky Method. And, what exactly is this Method? The answer arrives in the second episode. Sandy (played by Michael Douglas) an acting coach, who runs his own school tells his students, “Experience the feelings that come up, no matter how painful,” he urges them, “because that grief, that unrelenting sorrow-that’s the raw material. That’s the gold an actor mines to create great performances.”

Sandy is represented by his bestie and casting agent, Norman (played by Alan Arkin) who simply refuses to sugarcoat the bitter truth. Alan is the master word-smith; he whips up punch lines, with the ease of a magician conjuring tricks out of his hat. Here’s a sample: While advising Sandy on his relationship, he throws this gem of a line, “The sign of a good relationship is to make the woman feel like she always comes first.”

Norman knows what he is talking about. He was happily married to his wife for 46 years before she lost her life to the big C. Perhaps in the entertainment world, replete with temptations, this may seem a tad idealistic, but if Hollywood star Tom Hanks can remain married to Rita Wilson for 31 years, why can’t Norman remain in love with his wife Madeline (played by Jane Seymour)? Sandy is the clichéd example of a somewhat debauched actor, who has been twice divorced and obviously unsuccessful at managing relationships.

There is a cameo appearance of Sandy’s ex wife Ruth, and the mother of his daughter, Mindy (played by Sarah Baker who specialises more in rolling her eyes and appearing more spectator like in her reactions). Kathleen Turner who has played Michael Douglas’s co-star in the iconic The War of the Roses  was the actor-producer’s obvious choice for Ruth’s role. And she simply smashes it out of the park with her cameo act, where she pushes his buttons with delightful ease (pun intended) when Sandy calls to discuss Mindy’s relationship with an older man.

Chuck Lore, the creator of The Kominsky Method has woven a script along with his team comprising Danny Devito, Alan Arkin and Casey Thomas Brown that simply sucks you into his narrative.

Full credit must be given to Douglas, who generously allows Alan to walk away with the accolades, often reacting to his witty one-liners and sometimes just playing a passive role, despite being the main lead. Only a confident actor, who also understands the dynamics of being a successful producer, can manage this. It is this generosity of spirit that makes The Kominsky Method a must-watch. A saga, where friendship and familial ties matter more than anything else!