A group of wealthy kids, who are sent away on a 10-day trip discover that their parents are missing. 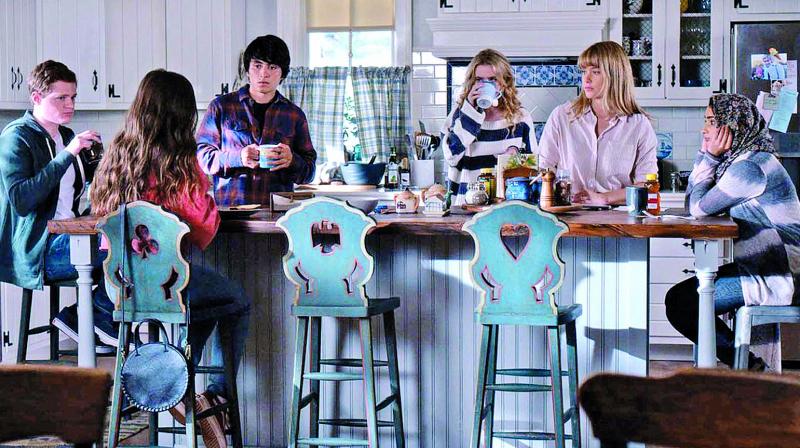 Through the series, Allie emerges to be a strong character one who is not afraid to take difficult decisions or face uncomfortable situations.

Have you ever thought about what it would be like if all our parents disappeared one fine day? Won’t it be fun? To stay up way past our bedtime, to eat junk all day and to skip school or college! Netflix’s The Society is about a group of kids from a wealthy town of West Ham, Connecticut. When the kids are sent away for a 10-day trip to deal with a stink that permeates the town, the parents and the rest of the town simply disappear. What has happened to them? And where has stink gone? When the teens arrive early because the camp road was blocked, they find the entire place deserted. Not a soul in sight! The weird part is that the local phones work but they are entirely cut off from the rest of the world. Roads too are blocked and they are surrounded by an extremely dense and dangerous forest.

The first episode introduces us to  — Cassandra and her sister Allie, Will – Allie’s best friend, Sam and Campbell, their cousins and Harry, a wealthy kid who is Cassandra’s arch nemesis. While some of the kids organise a wild party to celebrate their freedom, others try to determine what exactly happened. But all things can go for a toss when you put a bunch of wild kids together in a same place without an authority figure. That’s what happened in the series too. Kids turned on kids for food, water etc. This is when Cassandra got together with a few others and formed a council that would govern the town until their parents return if they ever did. The council organises weekly meetings, movie nights at the church and also a prom (where sadly Cassandra is killed by an unseen assailant.) While the council handled the workings of the town, a separate group of kids headed by Gordie try and find out what exactly happened to them. They try to find answers to questions like where are their parents? What happened to stink? Are they home or in a parallel universe?

Through the series, Allie emerges to be a strong character one who is not afraid to take difficult decisions or face uncomfortable situations. The series also follow the lives of her cousin Sam and his brother Campbell, a diagnosed psychopath. Sam’s friend, Becca who finds out that she is pregnant. Will who secretly harbours a crush on Allie etc. While The Society is written in a way that awakens the detective in you wanting to know what exactly happened, it also drags quite a lot but does make for a interesting watch. Will the kids ever see their parents, will they go back home or are they stuck in this town that looks eerily similar to the original one? Only Season 2 will have the answers.