This season promises to be exciting, mystical, eerie and full of ‘magick!’ 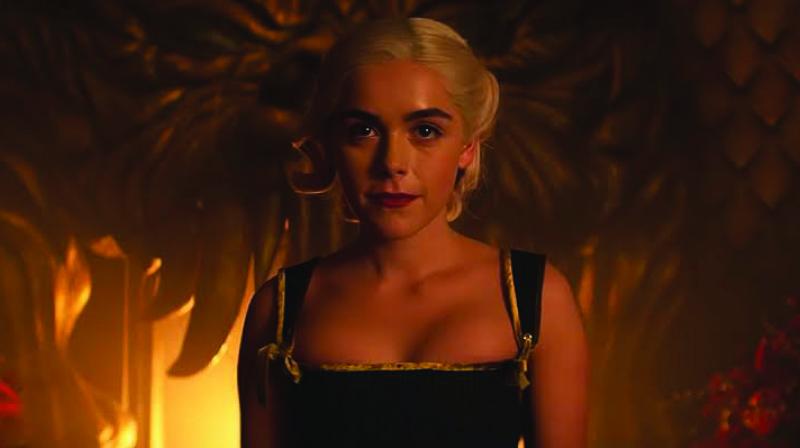 A scene from the film Chilling Adventures of Sabrina
Rating:

After the roller coaster ride that was Season 2 of Chilling Adventures of Sabrina, the series has just dropped the third part as well. Season 2 ended with Sabrina’s ‘dad’ – The Dark Lord aka Lucifer Morningstar aka The Devil trapped in the Nicholas Scratch’s who became flesh Acheron and Madam Satan taking advantage of the opportunity. She assumes the title of Queen of Hell and takes Nick to her new kingdom. The third season promised to be a spectacle. With a bit of time travel, some spells, a lot of magick, the series delivered on this promise.

Season 3 starts with Sabrina and her gang — Theo, Roz and Harvey setting out to get Nick out of the clutches of Lilith. With the help of Dorian Gray, the gang sets out to navigate the dull, depressing and quite frightful landscape of hell. But in doing so, Sabrina changes her fate forever. She agrees to become Queen if Nick is allowed to leave making her Queen and Lilith as Regent. The first few episodes focus on the couple and how they deal with Nick’s PTSD after having trapped the Dark Lord. But later on, the series shifts to a new storyline with the arrival of the Pagans who wreak havoc on Greendale.

With the men (Dark Lord and Father Faustus) out of control, the ladies take over. Sister Zelda and Hilda take up the responsibility of the coven and protect the ones left standing. But unfortunately for them, their powers start waning. What is interesting to watch is the various rituals and spells that the coven does the restore their powers. And with the arrival of the Pagans whose only goal is to eradicate the witches, the coven is left helpless. If all of this was not enough, enter – Caliban (Prince of Hell) who wants the throne of hell, Sabrina is left running in circles.

Gavin Leatherwood who plays Nick in the series did an amazing job of portraying the pain that Nick left as he trapped the Dark Lord. At the same time, Kiernan Shipka who was seen hovering in air, with white eyes and a crown around her head in the last season, was portrayed as more of a teenager in this part. What happened to her being the Herald of Hell? Where did all those really cool powers go? What could have been better is Gavin’s character. Post returning from Hell, he just disappears and is shown only in certain parts. What worked were the plotline and its twists and turns. Instead of repeating the whole — “defeat Satan, save the world!” storyline, the Pagans were introduced who add some new life into the series. The series ended with a lot of questions which will only be answered in the next part!