Sibin and his family have become famous through the singing app Smule. 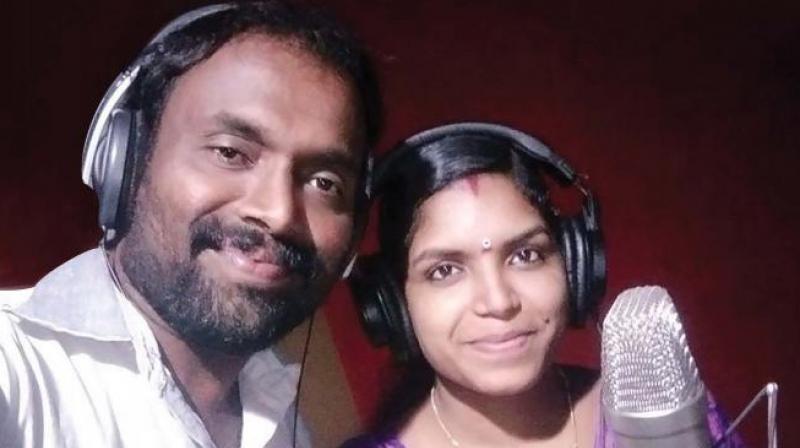 Relenting to his friend’s constant persuasion, Sibin finally decided to give Smule singing a try. “Not knowing what the thing is all about, I went on to download the application on my mobile phone,” Sibin recalls about his first brush with the music-making app. The next few months to come were life-altering for this singer and his family of four. The Smule family, comprising his wife Shenisha Sibin and two little children — three-year-old Sivanand and one-year-old Chilanka —, keeps winning more and more hearts. Their latest video alone has earned, believe it or not, one million views! If the Smule we know is about socialising through music, this family stands out in the crowd with the hubby-wife duo exploring newer planes each time they post something.

Sibin, who was a driver at a private laboratory in Kochi, quit his job to be a full-time singer, launched his own music band and became an album-maker – all after the Smule fame. “Our first video Aararum Kaanathe... song from Chandrolsavam, was shot inside the house initially. I realised there was lack of sufficient lighting, and moved out, where my kids were playing and my wife was monitoring them. I felt it would be good if they are also seen in the frame. Out of curiosity, I shared it on my Facebook. The response to this single video was amazing when some of my friends shared it on other Smule singer pages,” he says.

Shenisha, trained in Bharatanatyam and Mohiniyattam, had put her dancing instincts on the back-burner to look after the family and kids. The new hobby helped her dust off the skills. One of the viral videos, set against the backdrop of a temple, had the wife dance to the husband’s melodious rendering of Kaveri Padamini... from Rajashilpi. “He has the karaoke to listen to through the earphones and sing. For me, the rhythm plays inside my head. Or take cues from him in portions without vocals. I am happy when people accept us,” gushes Shenisha. She fondly recollects her college days when she was a dancer. Being with the singer husband let her discover her unexplored musical traits, hidden somewhere within. The eldest kid was the next to try his crooning skills with the father.

Both are determined to put up the best of their talents and multiple rehearsals are behind the making of each video. They don’t mind going for retakes if it does not turn out well on the first try.  The likes, shares and views stories aside, Sibin says, it is not always sunshine and rainbows. “There still are people who raise negative comments are not less. They wonder how it appears flawless when outdoor shooting has every chance to get external disturbances. They doubt whether we lip sync to a studio recording. I call it luck, nothing else,” explains Sibin.

From a boat song, he cites an example. “It became so windy when I started. We recorded three times before okaying the final track,” he recollects.  The time has come for the pastime singer to make a profession out of music. After getting famous on Smule, two months ago, the husband and wife formed the band Melodrops, that plays unplugged melodies in Malayalam for special occasions and festivals. They have a way with handpicking soulful melodies in Malayalam cinema to fit a general taste for music.

Grown fond of their music, a Malayali NRI made them composers also. “He sent a few lines of his on WhatsApp that he wanted us to set to tune. My wife did that job nicely.” That followed the making of two music albums.  Soon he opened a dedicated Facebook page and YouTube channel to stream their works. A photo post on the former turned lucky for their daughter Chilanka. “On her first birthday, a fashion company approached us to make her their brand icon. She earns at this age,” he smiles. Sibin and Shenisha plan the orchestration of the song for the NRI while devising novelty to their Smule videos in future.