Bhagat Singh senses a hidden melancholia beneath this joi de vivre, with a deep involvement in love stories ending in tragedy. 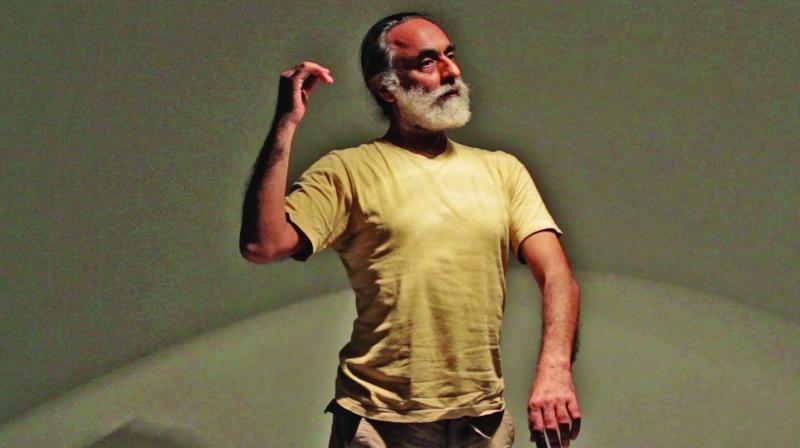 As a people, we are so prone to categorising into neat profiles everything one experiences in life — with dance (particularly what is deemed in our reference as “classical”) being no exception. This attitude results in anything beyond the framed category becoming non-dance as per the rigidly conformist viewer. But modern dance goes far beyond mere movement and Navtej Singh Johar’s “Tanasha”, a riveting amalgam of movement, of dialogue in a soliloquising form, of bits of music, and what you have is dance theatre, daring and provocative with a burning intensity. Built round the imagined last hours of Bhagat Singh in his cell, facing the gallows with stoic resolution, Tanasha has its inspiration in Bhagat Singh’s jail diaries, particularly his essay “Why I am an atheist” — the hero’s clarity of mind and die-hard pragmatism, not a whit swayed by religious doctrines and idealistic philosophies. Brought up the Indian way with religion very much a part of life, his mind recollects the “praarthana” time in school when he was made to recite not just Gurbani verses but the Gayatri Jap and much else. He ponders on the Punjabi identity with its zest for living life to the fullest — its throb best symbolised in Bulle Shah’s love poetry and Heer and Ranja. The “doli” scene, when the bride takes leave departing to the groom’s house and other verses nostalgically recited, while evocative (the non-Punjabi, as I am, perhaps missing out on the vernacular details), spoke to the inside of the Punjabi in the audience with a special throb. Bhagat Singh senses a hidden melancholia beneath this joi de vivre, with a deep involvement in love stories ending in tragedy. Bhagat Singh’s beliefs mingle here with autobiographical details from Navtej’s own life as a Bharatanatyam and modern dance practitioner, in a constant north/south blend, with the Punjabi energy looked at against the deep green of the South with its sea-sides and temples and Bharatanatyam.

Pondering on death, with the after-death tenets of different religions like Islam, Christianity, Hinduism and Sikhism — all contrasting with his own conviction of death as a finality — a finish with nothing after, Bhagat Singh wonders on who prescribes the dos and don’ts of religion. There is the story of Andal whose love for Krishna with total conviction of being his betrothed, made her take the garland meant for the Lord and drape it round her own neck. The musical verses from Andal’s dream sequence crooned in the soft voice of the unobtrusively seated Elangovan on the dark side of the stage, with the actor joining in, adds emotive throb. Then there is the blind Shabari, whose offering of fruit already tasted by her Rama gratefully accepts without reservations. Are not these acts sacrilege — “jhoota”? What is right or achha? Who decides? The soliloquising puns on words and without a single offensive statement, the actor makes his own statement subtle but clear of inclusivity — of intent alone deciding the right and wrong of an act. Also metaphorical is the segment of Muddunatesa Padam “Ososi” in Mukhari ragam, wherein the man fed up of the wiles of the woman, retires to Kashi donning ascetic robes. Keeping so many strands together in a flow must have posed a challenge. From Bhagat Singh’s expert tying of the Sikh turban, to every little detail, the honesty and intensity, held the audience completely captive.

At the Indira Gandhi National Centre for the Arts (IGNCA) was an unusual film on “Vaikhari” produced by Lubdhak Chatterjee, sponsored by Public Service Broadcasting Trust (PSBT). An engineering graduate, Lubdhak attempts looking at “parhant” or the articulation of mnemonics in dance through imagery visually caught on the camera, the film seeking to look at the nature of pure sound and how it connects with form in dance, art and in life. The pattern of sound arrangements in rhythmic phrase and their utterance can suggest a “bindu”, a “rekha” and an “akaar” (dot, line and shape) all attributes of form! In a scene showing Kalidasa’s Meghadootam, sounds like “Ghe ghe tita” suggest the dark clouds which the Yaksha separated from his beloved — and the messenger carrying his words of love to his beloved. Inanimate sound through its patterning and “chhand” becomes an abstract symbol suggesting form. The spacing of the “bols”, the silences, can all convey phrases of movement. The bols in a “bandish” can suggest chirping birds, rain of varying intensity (drizzling or pouring) and many other things. Through the utterance of certain sounds arranged to create a certain effect, in a purvaranga invocation, a canvas is created which the dancer later fills through her dance. Shot almost completely in the variety and beauty of the Mahagami dance institution premises, one sees director Parwati Dutta speaking to her students and directing them on sounds translating to movement, with references to texts. With sounds filling up space, filmed sculptural exuberance of temple architecture acquires a special vibrancy. Sound vocabulary in dance has been inspired not just by percussion mnemonics, but also by nature and its inhabitants. In a brief guest appearance, Pandit Birju Maharaj explains how tonal inflections and every little turn and shift in the syllabic punctuation of a rhythmic composition suggests movement inflections. Parwati mentions Nirgeet, a thousand year parampara, and following her Kathak references also gives examples from the other form she practices — viz Odissi and points to the Vadya Pallavi based on mardal mnemonics, on which she worked with the late Banamali Maharana. A very interesting visualisation of how what is called nonsense syllables finds expression through movement and form.

Nearer what one is used to in dance, and upholding culture as defining the Indian identity “Hamari sanskriti hamari pehchan”, Sangeetika presented an evening of dance of different denominations at the Stein Auditorium. Kathak duo, Nalini and Kamalini, disciples of Guru Jitendra Maharaj of the Benares Gharana, stylistically, are very different from dancers of other Kathak schools. The strong hand stretches and thrusts have a tandav tone far from the “nazaquat” of the Lucknow Gharana. Starting with Rama Stuti set to rag Yaman in rupak taal, with the accent in the imagery on the valorous bowman, the dancers proceeded to their trademark of nritta in Jhaptal — the “dhinadhadhina” rhythm less elaborated through placid footwork spelling out each bol, than on a “gharghara” shake of ankle bells. What this critic missed were the gentle counter-pointing moments amidst a generally fast paced vigour of rhythm, which however many in the audience seemed to relish. In the true spirit of Holi round the corner, with the Gopis dodging Krishna’s pichkari “math maro Giridhari”, the finale with a student joining in aimed at evoking the spirit of Holi’s abandon. The shower of flower petals, while colourful, made one wonder as to how the next group would be able to use the floor space. But the staff of the Habitat quickly cleared the area. Nalini Nigam provided tuneful vocal accompaniment with Akbar Latif on the tabla, Azjal Zaroor on the violin and Atul Shankar on flute. Conducting with his parhant was Guru Jitendra Maharaj.

Sandhya Purecha’s Bharatanatyam programme designing, with a curtain raiser evoking the main rivers of India was very fitting, for a country whose largely riverine culture exudes an unmistakable identity — the “sanskriti” connecting man with nature and religion. Sandhya made an entry with her disciples Chitra Dalvi and Pushkala Devachakke, with Shankaracharya’s Ganga Stotram, the dance visualisation touching on the Ganga flowing from heaven to be contained in Shiva’s matted locks, with her abundance providing succour to many a man — her vahana (vehicle), the crocodile, very prominently shown. The tortoise (Kurma) was the vehicle for river Yamuna — her shores and waters famed for the Krishna story — his youthful escapades, feats and romance with the butter-churning Gopis. With the crocodile again as carrier is “Devi Narmade” with her sacred “parikrama” — the animal imagery surrounding her abounding in fish, the elephant and the birds. Very much a part of the devadasi tradition was the next item — a Swarajati. One of King Shahaji’s many Nirupanas in Marathi (an important chapter in Bharatanatyam history during Maratha rule in the south) which Sandhya’s Guru Parvati Kumar researched and specialised in, and portrayed the Praudha Nayika preparing her two underlings on the dos and don’ts of dealing with adult intimacies — they are soon to encounter companions of the king. Starting with the way their hair parting needs to be (“Sangabhangatukaramuni ghe”), to the ways of greeting their master and the courtesies to be practiced on different occasions are strict instructions and the girls after seeming obedience, when alone, revert to playing games like blind man’s bluff till chided. Intelligently choreographed, the two disciples as underlings — about to be initiated into adult life, with Sandhya as the senior advisor, were well matched. Purely abhinaya-oriented was Purecha’s solo presentation of the Javali “Era ra ra” in Kamas, (ascribed to Dharmapuri Subbarayar, by some to Patnam Subramaniaiyer whose name was wrongly announced), wherein the nayika, unable to bear the pangs of Manmatha (“maru baniki taalalera”) unabashedly calls out with urgency to her beloved. 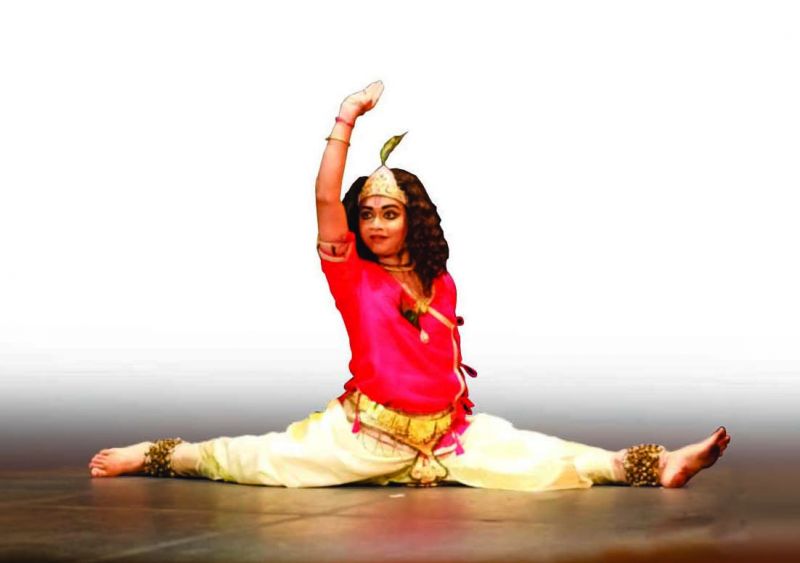 The best of the evening by Mohiniattam dancer, Jayaprabha Menon, came last with a dwindling audience. The dancer’s exceptional involvement came to the fore in the very starting “Yashodhara engilum Siddhartanallanno” in Kavalam Narayana Panikar’s music composition in Mukhari, interpreting Yashodhara’s mental churnings on encountering the Buddha. For her the husband she deeply loved as Siddhartha (who stealthily deserted his wife and newly born son) is a completely different entity from (his evolved version as) the Buddha who instils pure worship and devotion in her — till realisation dawns that the two cannot be separated (advaita). Both son and mother become the Buddha’s followers. Yashodhara attributes her inner evolution to her own penance during her trial years, bringing up a child as a single parent. The Shivapanchakshara hymn set to music in Shivaranjini and as presented by her disciples showed very well the contrasts of attitudes, stern and graceful, embodied in the entity of Shiva. The concluding Varsha Gamanam from Kalidasa’s Ritu Samhara of dark clouds compared with trumpeting elephants marching, followed by rain, set to raga Amritavarshini in Kavalam Narayana Panicker’s score, was delightfully conceived — the vocabulary of “vaitaris” (bols) suggesting images through sound incantations. What stands out in Jayaprabha’s performance is her incisive abhinaya. Tasteful costuming and well-recorded music added another dimension.