The film tries to do both comedy and action, and excels in neither 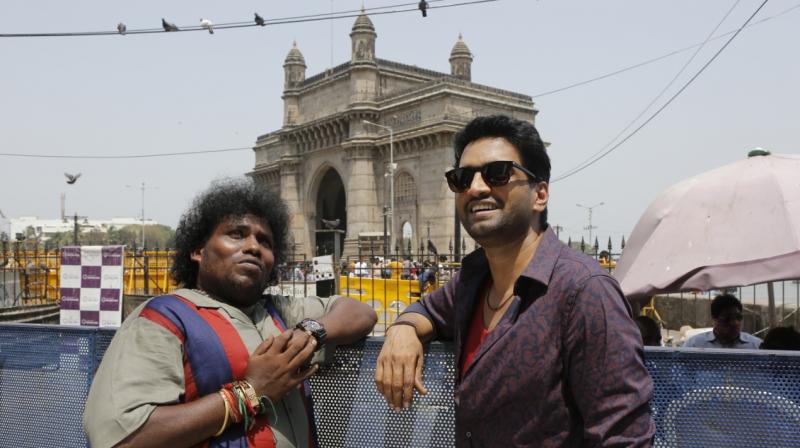 Dackalti: What happens when two petty thieves wanna make it big in Bombay.

Guru (Santhanam) and his friend (Yogi Babu) are petty thieves in Mumbai who work for a gangster Bhai (Radha Ravi). One day Bhai assigns Guru the job of finding a girl from a portrait. She is wanted by a billionaire Vijay Samrat (Traun Arora). And the back story of Vijay is that he draws sketches of random girls and then wants to bed them. The womanizer sends his henchmen across the country to kidnap such young women and is ready to shell out a ton of money to get them.

In this case, the girl in the painting is Malli (Ritika Sen) from down south and the money he is prepared to pay is Rs 10 crore. Guru finds out that Malli lives in Tiruchendhur and is an aspiring filmmaker. Malli on the other hand runs away from home to board a bus to Chennai as her parents are against her film-making dreams.

Our hero coincidentally meets her and manages to lure her with an offer of a directorial opportunity in Bollywood. He tells her he knows Shahrukh Khan’s manager, and instead of using her script for Ajith or Vijay, she can give a try with SRK. The rest is all about the duo’s adventurous trip from Tiruchendur to Mumbai and how and why he has a change of heart after handing over Malli to Vijay Samrat.

Dackalti is a Santhanam film and hence the minimum you can expect is a fun ride. The concept of two colliding timelines is nothing new, and the problem is that our main guy has to mix his signature comedy with romance and action, but excels in neither.  Of course, they could always rely to some extent on Yogi Babu to bring on the laughs but that can’t save the film. His comedy is largely distasteful.

Newcomer Ritika Sen is just randomly tossed in as your trifling and dense K-town girl who’s only job is to look cute. And when the pockets of laughter done with, you are left hanging in the middle of nowhere.

Technically, Vijay Narain’s music is good and the songs are hummable. The pacing and editing could have used some more work. Yes, the run time is good but the scenes do jump a bit too much. Perhaps watchable once!