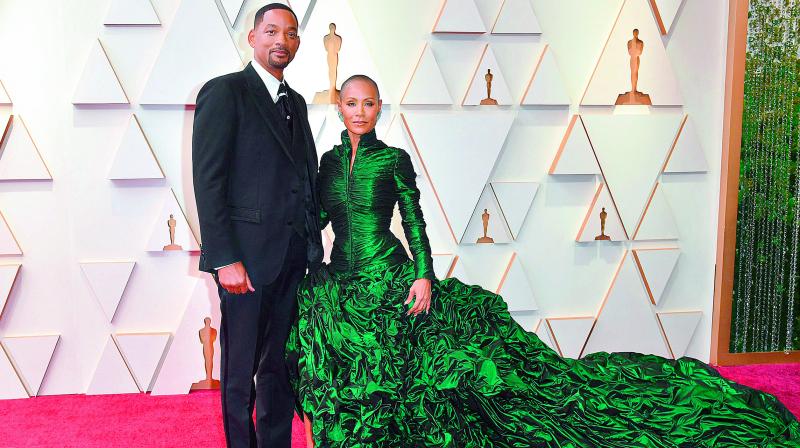 Will Smith and Jada Pinkett Smith. (By Arrangement)

Hollywood star Will Smith has been candid about growing up in a home plagued by domestic violence. The very first chapter of his autobiography released last year gives a rather disturbing description of how his father attacked his mother, and the impact it had on his childhood.

When Smith leapt to the stage and slapped comedian Chris Rock, a presenter at the 2022 Oscar Awards, it resounded around the world and a topic that is being discussed everywhere is - What led him to indulge in the violent behaviour? Was it his abusive childhood? Was it some skewed concept of ‘masculinity’? Or did he just display lack of control over his emotions?

And another question that the incident gives rise to is — Does a joke justify a physical attack?

Comedian Radhika Vaz feels Will Smith hitting a man for doing his job — that of a comedian — is wrong. “The fact that one artiste can do this to another is deplorable. It felt like he wanted to prove a macho point which I feel is peak toxic masculinity,” she says.

(Radhika herself had a heated exchange on Twitter with filmmaker Ashoke Pandit over her video mocking the ancient Indian festival of Karva Chauth and taking a dig at the concept of women fasting from dawn to dusk in order to ensure a long life for their husbands.)

In his autobiography Will, Smith says, ‘Within everything that I have done since then... there’s been a subtle string of apologies to my mother for my inaction that day (when his father attacked his mother).’ He writes. “No matter how successful I’ve become … there is that subtle and silent feeling always pulsating in the back of my mind: that I am a coward.”

Says Nirali Bhatia, a Cyber Psychologist and TEDx speaker, “Physical abuse is the most understood form of violence as compared to emotional, verbal or mental, because the wounds are visible. Also, it is far more accepted as an impulsive act (that is, a reaction not thought through).”

Since such abuse is impulsive, it is usually followed by a feeling of guilt, and a process of reasoning, to justify the action — take the example of a parent who raises his hand against a child, and then justifies the act.

“Physical abuse is more often resorted to by someone who cannot express himself or herself, or communicate using words. Young children usually start expressing their anger, hurt or fear by physical acts such as biting, scratching, hitting etc., as they haven’t learnt to express their feelings using words. However, adults displaying physically violent behaviour are usually driven by a need to exhibit dominance or control or are challenged in managing their impulses,” says Bhatia.

Childhood experiences play a large role in normalising or accepting violence, she says. Children who have witnessed any form of violence while growing up accept it as a way of expression or part of relationships.

“Lastly the attention that physical abuse or violence attracts as compared to other forms of abuse is becoming a reason for such behaviour in many instances” she says.

What has surprised many people is that, after Smith’s violent reaction, the awards show continued as scheduled, which can be taken to be a normalising of violence, something American culture is known for.

Can’t you take a joke?

Says Vasu Primlani, stand-up comedian and environmentalist, “Smith’s behaviour is not acceptable at all. He (Rock) wasn’t saying anything derogatory about her (Smith’s wife Jada).” In Vasu’s opinion, what Rock said wasn’t an insult. “Jada looks as beautiful as ever, if anything her beauty is accentuated by her current hairstyle,” Vasu feels.

When a “good” joke crosses the line, it makes someone feel uncomfortable or hurt. Physical violence is not okay, and neither are jokes that hit below the belt.   Actor Will Smith has offered an apology by sharing the post on social media. He wrote: “Violence in all of its forms is poisonous and destructive. My behavior at last night’s Academy Awards was unacceptable and inexcusable. Jokes at my expense are a part of the job, but a joke about Jada’s medical condition was too much for me to bear and I reacted emotionally.”

Comedians Who Were Under Fire Over Jokes

Will Smith is only the latest in a long list of those who have taken exception to remarks by comedians. Here are a few other such incidents:

* In December 2020, the Supreme Court issued a show cause notice to comedian Kunal Kamra on pleas seeking initiation of contempt of court proceedings against him after he criticised the Supreme Court’s order granting bail to the Republic TV Editor-in-Chief.

* In July 2017, comedian Tanmay Bhat was booked and an FIR was registered against him under Section 500 (defamation) of the IPC and 67 of the IT Act after he tweeted a meme of Prime Minister Narendra Modi with a dog filter on Snapchat.

* The comedy group AIB, which was headed by Tanmay Bhat, Gursimran Khamba, Ashish Shakya and Rohan Joshi, got into trouble over their infamous ‘roast’ (insult comedy) in 2015 featuring actors Ranveer Singh, Arjun Kapoor and director Karan Johar, among others. The collective was booked on obscenity charges.

* Director Ashutosh Gowariker had blasted fellow director Sajid Khan for making fun of Harman Baweja at an Awards function in 2009. When Ashutosh was called on stage to receive the award for Best Film for Jodhaa Akbar, he couldn't hold back and lashed out at Sajid for his remarks.