De Havilland's journey is no less exciting than a Hollywood drama, with two Oscars and a hard-fought 'de Havilland law' 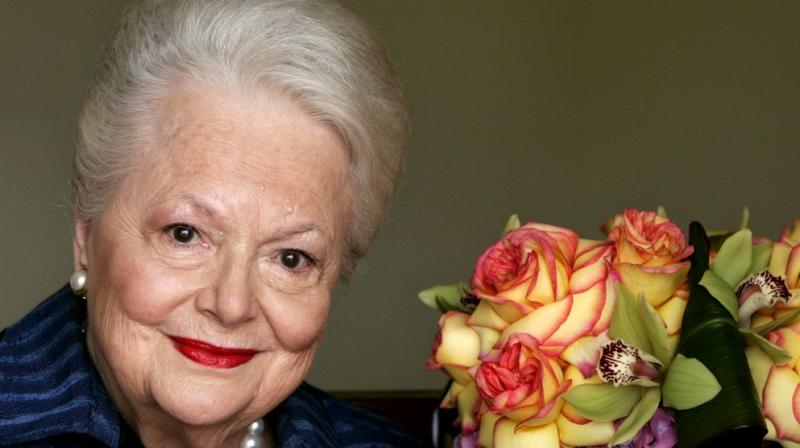 Los Angeles: Olivia de Havilland, a two-time Oscar winner and one of the last links to Hollywood's Golden Age, died Sunday at the age of 104.

The actress, who starred in blockbusters like "Gone With the Wind" is the sister of another Hollywood starlet Joan Fontaine and acted alongside Errol Flynn, Clark Gable and Vivian Leigh.

In a statement, her publicist Lisa Goldberg said de Havilland "died peacefully from natural causes" at her home in Paris, France, where she had lived for years.

De Havilland, who built a reputation for being a bankable star for any genre, starred in 49 movies from 1935 to 2009. "Gone with the Wind" (1939) brought de Havilland wide acclaim for her role as the long-suffering Melanie, love rival to the fiery Scarlett O'Hara played by Leigh.

The film was the highest-grossing movie of all time, adjusted for inflation, but its depiction of contented slaves and heroic slaveholders has garnered criticism in recent years.

Following this year's mass protests against racism and police brutality, it was removed from the HBO Max streaming platform in June pending a return at a later date along with a discussion of its historical context.

The film, however, led to de Havilland's first Oscar nomination.

A legend - on and off-screen

De Havilland's legendary persona could hardly be restricted to the screens. On the back of the roaring success of "Gone With the Wind", she frustrated her bosses at Warner Brothers, who at the time effectively owned their stars, by rejecting script after script when she found the roles uninspiring.

And in a shocking move for the era, she sued the studios, demanding release from a seven-year contract.

In 1945 she won the case -- a far-reaching ruling that gave actors the right to choose their own roles and career paths that is still known as the de Havilland law.

"You were a great celebrity but also a slave," she said of the previous system in a 2009 interview with The Irish Independent.

Having been blacklisted for three years and unable to work, her career was revived by the legal victory, bringing her the freedom to pick her roles.

In 1946 she won her first Oscar for "To Each His Own" with her portrayal of an unmarried mother's heartbreaking struggle over a child she could not acknowledge.

She won her second Oscar for her role as a socially inept spinster in "The Heiress" three years later.

De Havilland was also involved in her own real-life Hollywood drama: a long-running estrangement from her sister Joan, one year her junior and the lead in classic films by Alfred Hitchcock, Orson Welles and Max Ophuls.

Neither actress ever spoke publicly about their feud and their careers shuttled along in frosty parallel.

In 1941 de Havilland lost out to Fontaine for an Oscar and the sisters, born to British parents living in Tokyo, remain the only siblings in Academy Award history to have both won lead acting honours.

Twice married and with two children, de Havilland's second husband was French journalist Pierre Galante and the relationship took her to Paris in the mid-1950s where she remained.

In the 1970s and 1980s she shuttled back to the US for film and television work, but she progressively retreated from the limelight.

In 2018, aged 101, de Havilland took on the industry in another major court battle, suing the FX network over a depiction of her in its Emmy-nominated miniseries "Feud: Bette and Joan", about the enmity between Joan Crawford and Bette Davis.

De Havilland argued the series put her in a bad light, with her fictional version describing her sister as a "bitch".

An appeals court unanimously tossed out the lawsuit, prioritising the rights of the show's creators to freedom of speech over her complaint.

When a silver-haired de Havilland presented an award at the 2003 Oscars ceremony, she was greeted with a standing ovation lasting nearly four minutes as modern Hollywood paid homage to one of the enduring emblems of its past glory.

Tributes poured in on Sunday.

"At a time when women's place in cinema and in society at large is being questioned, we must remember the personal strength she showed when she attacked the studio system to free actors from exploitative contracts," Fremaux said.

And the Screen Actors Guild tweeted that her "grit to take on the studio system in 1945 helped her fellow actors for generations to come."

The star had lived in Paris since the early 1950s, and received honours such as the National Medal of the Arts, France's Legion d'Honneur, and the appointment to Dame Commander of the Order of the British Empire.