Lovebirds Joe Jonas and Sophie Turner were spotted indulging in PDA while on their trip to Paris. 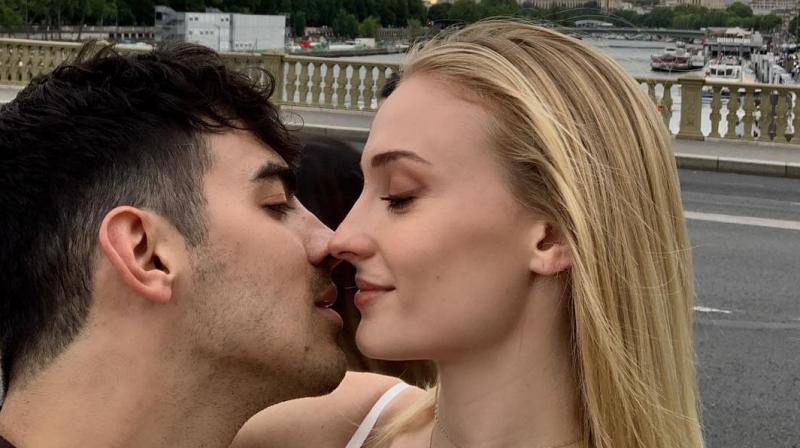 Washington DC: Before tying the knot for the second time, lovebirds Joe Jonas and Sophie Turner were spotted indulging in PDA while on their trip to Paris.

According to People, the couple on Saturday posted the same sweet picture on Instagram where the duo was seen leaning in to share a kiss while the famed Eiffel Tower loomed in the background. "Me," the couple captioned the picture.

Apart from sharing some intimate moments, the duo was seen spending time shopping and hanging out with friends as well. Sophie shared a picture on the Instagram story where she showed off her "glowing " pair of white sneakers.

During their trip to Paris, the couple was also seen together on Thursday outside Hotel Costes after enjoying dinner with friends. The 'GoT' star and singer had their first wedding in May, tying the knot in a surprise ceremony held at a Las Vegas chapel just hours after the Billboard Music Awards.

A source previously confirmed to PEOPLE that the couple planned to have a traditional wedding ceremony in Europe over the summer, but "had to get married in the States to make it legal." Though the couple is yet to disclose exactly when they'll be getting hitched for a second time, Jonas has dropped several hints.

The musician last month was on bachelor party trip to Ibiza with friends, including brothers Nick and Kevin. He revealed that the couple would be having the ceremony in France during an April interview on the Zach Sang Show and as cited by People.

In contrast to their first marriage ceremony, which Diplo ended up live-streaming on social media, the 23-year-old actor told Harper's Bazaar, the UK and as cited by People that they plan on making this celebration "as low-key as possible."

"It's not about the dress, it's not about the food. It's about being husband and wife, and being dedicated to each other forever," she added during an interview for Net-A-Porter's PORTER Edit and as reported by People.