Entertainment   Hollywood  22 Oct 2019  Poking around this Diwali: How poker kings and queens are ‘acing’ the sport
India, All India

Poking around this Diwali: How poker kings and queens are ‘acing’ the sport

As with most activities that have their roots in a time before the Internet, it was inevitable that poker would get online worldwide. 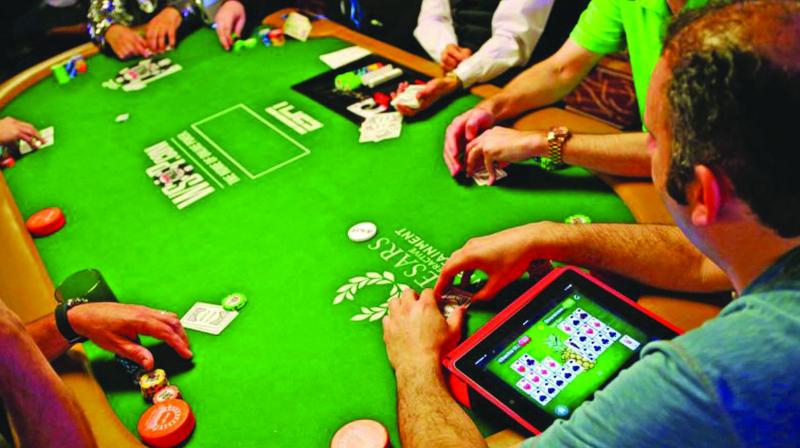 ‘Residential poker is a bit more social than a tournament. A few drinks maybe and some chatter, but no one is really getting smashed’, says Mandira Singh at a Sunday poker get-together

I’m not a gambler. I don’t gamble that much. In fact, I don’t gamble”. When the maths is done, actor Arjun Rampal’s clarification adds up to “I play a game of skill. It is recognised the world over. It’s called ‘poker’.” Yes, there is a monetary aspect to it with cash to be won and lost, but in his capacity as brand ambassador and promoter of the Indian online poker website — pokerhigh.com, Arjun hopes his association with the “sport” will disassociate it from falling under the gambit of gambling, possibly the first impression that it gives out to the many “naive people who think it is just another gambling card game”. The reason for this naivety, however, is a mix of climate and a deep-rooted tradition that is widely popular.

The worst of summer is behind us. Feelers of the signature autumn nip can be felt post sundown in the capital. For seasoned drinkers, this is reason enough to crack open the bottle especially as the build up to the day of lighting (green) crackers approaches. But apart from the nibbles, a key accompaniment to glasses filled with brands of alcohol that cover a wide spectrum in keeping with the consumers’ economic capacity, is a deck of cards. I’m not sure how many people use goddess Parvati’s win over Lord Shiva in a game of dice as inspiration (widely believed to be the mythological reason for a round of cards being considered “auspicious” on Diwali), but the term “card party” is a welcome cover for “heavy drinks and snacks till 3 am followed by butter chicken” along with the possibility of making or losing anywhere between a few hundred to a few lakh rupees, depending on the “stakes” being played. College students can plan them last minute, pick up a few beers and pass out on the table by round three. The more evolved in age and affluence create a setting with decor and staff in attendance, suited to make sure gambling into the night is as pleasant a package as can be! And the highest of high rollers hire event companies to re-create Vegas in South Delhi.

But over the last few years, and more so this season, a small but growing lot has moved well beyond the staple card game “teen patti”, a game where winning is based almost entirely on luck, and developed a rather strong fancy for poker. Plastic chips replace bundles of cash and “skill” becomes the key requirement, reducing luck to a bite-sized side plate — with intoxication falling in an equally low ranking. “Quite a few cards parties I go to in Delhi around Diwali time have started keeping maybe one or two tables for the classic card party games, while the rest are all playing poker. Residential poker is a bit more social than a tournament. A few drinks maybe and some chatter, but no one is really getting smashed”, confirms Mandira Singh while sipping on coffee at a 5 pm Sunday evening poker get-together. An example of both the growing number of women playing poker and the shift in gamblers to “players”, she has been playing for the last few years, and has been involved in it professionally too as an affiliate for an online poker website, and lost as well as “made enough money to fund one of my holidays”. Well, all this does not happen in the one-month build-up to Diwali. What started off as a “cool” game that Indian students who went to the United States and England for college and started bringing back in small numbers over the last two decades, has branched off into a year-round activity with its rise in India spreading across tournaments, online games, residential games and recently launched poker leagues (similar to any sporting league with celebrity brand ambassadors, multi-city teams et al). The fact that “it is more refined than teen patti, which is clearly a loud, fun party game, and involves a classy setting with the ability to bluff more”, is another factor responsible for the large exodus to poker, according to Mandira.

So, what is poker? Very simply put: a card game with an element of betting where the winner is determined on the basis of the combination of cards they have been dealt and how they use strategy and skill to their advantage. Your favourite search engine will give a more elaborate definition along with the various types of games and rules on the poker table, but Arjun Rampal adds another layperson fact that “You always have an out. Even before you’ve placed your bet, you can fold your cards at the start of the game itself. That’s why it is considered a sport worldwide. But because it is cards and there is money involved, people like to call it gambling here.” The casinos off the Mandovi river in Goa have always been considered the safe place for poker, with live tournaments being held all year in elaborate poker rooms, as they are officially licensed. But Vaibhav Gaggar, a leading Delhi-based lawyer, who is lobbying hard for poker tournaments to be held officially in cities across India, addresses the elephant in the room. He recently managed official permission for a licensed poker event in Delhi with members of the judiciary and some top cops in attendance. “Culturally, poker had been officially allowed in India since the West Bengal Gambling and Prize Distribution Act in 1957. It is treated as a ‘game of skill’ by the courts wherein the element of skill outweighs the element of chance, and hence real money, gaming and cash prizes are legitimate. This makes playing poker at home perfectly above board, as long as no one is charging ‘rake’ (a fee/commission charged for hosting a poker game). In Odisha, Telangana, Assam and Gujarat, ‘games of skill’ that involve money are not permitted in any form (online or offline). But barring these states, it is legitimate to hold commercial poker events as long as licences are in place. The challenge is that when you go to the authorities for permissions for game rooms in cities, they consider it gambling as they don’t know better.” In a nutshell, Rampal is safe!

As with most activities that have their roots in a time before the Internet, it was inevitable that poker would get online worldwide. While some Indian poker websites are licensed under the Nagaland Prohibition of Gambling and Promotion & Regulation of Online Games of Skill Act, others float along unofficially in the vast ocean of the Web till discovered and banned. The debate between which is more the real experience is an amusing one. Since a large part of the game is dependent on reading the body language of your opponent and “facetime” on a table, online loses points there — given it is just the individual and the screen. But being able to play on your own time, not needing to chase people to set up a game and the logistics that come with it, and the privacy of an individual experience, ranks online higher than offline for the few hardened online gamers I spoke to. They make up for lack of “face-reading” by “noting the betting pace and style” of their (invisible) opponents that are logging in from all parts of India including tier two cities. Naveen Goyal, CEO of adda52.com, one of the more popular Indian online poker websites, has found an interesting way to merge the two platforms by organising the annual “World Poker Tour” (with a grand prize of `3.25 crore) at the Deltan Royale Casino in Goa, where “It is a mix of online and offline. Part of the festival happens online and those who qualify, fly to go and play at the casino.” For a website that has been active eight years running, his observations about how poker can help an individual holistically by “preparing people to stay calm under pressure,” given the high stakes and prize money involved, and “being able to take calls on what is right and wrong, when to stay in the game and when to cut off,” come with a pinch of salt.

While doing some workshops at a residential boarding school in Mussoorie recently, the spread of poker made itself apparent when I was invited to play a round at a staff member’s cottage on a Sunday afternoon. Since I’m not a player (yet) I chose tandoori chicken and gulab jamuns on the mall road instead. But the invitation broke the association the game has with going on “into the wee hours”. On the hillside, its supper by 6 and bed by 8 pm. Sports are played before.