The script for the premiere episode of the HBO show's season seven called for the 26-year-old to do what he does the best - singing. 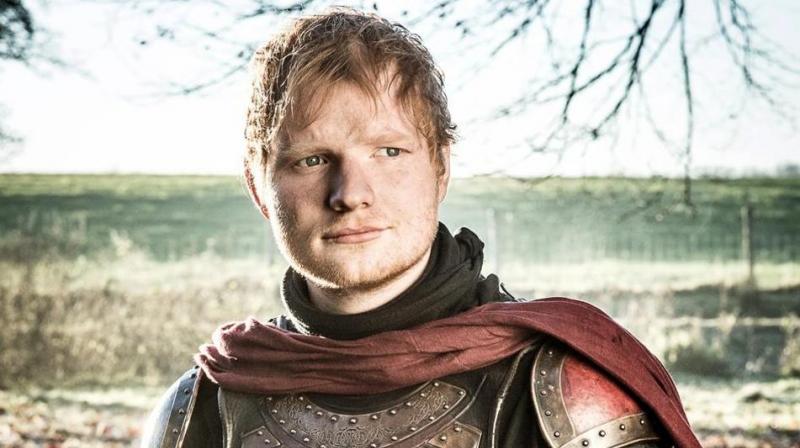 Ed Sheeran strikes a cameo in the popular winter season 7 of 'Game of Thrones.'

Mumbai: The 'Game of Thrones' winter is finally here, so is Ed Sheeran's highly-anticipated appearance and it is making many fans think out loud.

The script for the premiere episode of the HBO show's season seven called for the 26-year-old to do what he does the best - singing.

In the segment, Arya Stark, portrayed by Maisie Williams, is seen taking some time out from killing the bad people to hang with the 'Shape of You' hit-maker, who plays one of the nameless soldiers.

He sings the lyrics from the George R.R. Martin book 'A Dance with Dragons' - "He rode through the streets of the city / Down from his hill on high / O'er the winds and the steps and the cobbles / He rode to a woman's sigh / For she was his secret treasure / She was his shame and his bliss / And a chain and a keep are nothing / Compared to a woman's kiss / For hands of gold are always cold / But a woman's hands are warm."

After which Arya tells Sheeran's character, "It's a pretty song, I've never heard it before,' to which he responds, 'It's a new one.'

However, the 'Thinking Out Loud' hit-maker's cameo appearance didn't go down that well among some fans, with one tweeting, "Nymeria to Arya next week: YOU HAD ED SHEERAN IN YOUR HANDS AND YOU LET HIM GO...WTF."

One twitterer wrote, "Goddamn Ed Sheeran has a new single out in Westeros. #GameOfThrones," while another said, "Hello it's me, ed sheeran, and i'm here to remind you none of this is real! It's just a tv show haha, I'm ed sheeran."

While one fan noted, "#GameOfThones writing room: 'Ok we're beyond the books, we have creative control'...Concept: Ed Sheeran camping in the woods singing a song," another wrote, "When Arya's like "I guess I'll stop for an Ed Sheeran concert on my way to murder a bunch more people." #BagofSwords #GameOfThrones."

One post read, "Arya: 'That's a pretty song.'... Ed Sheeran: 'It's a new one... off my brand new album, 'Divide,' in stores now!!!!' #GameOfThrones," while another said, "If Arya doesn't burn Ed Sheeran he'll come back as a white walker and be playing Westeros Glastonbury for thousands of years."