Madaari song from Hollywood movie, The Extraordinary Journey of the Fakir is raging hit. 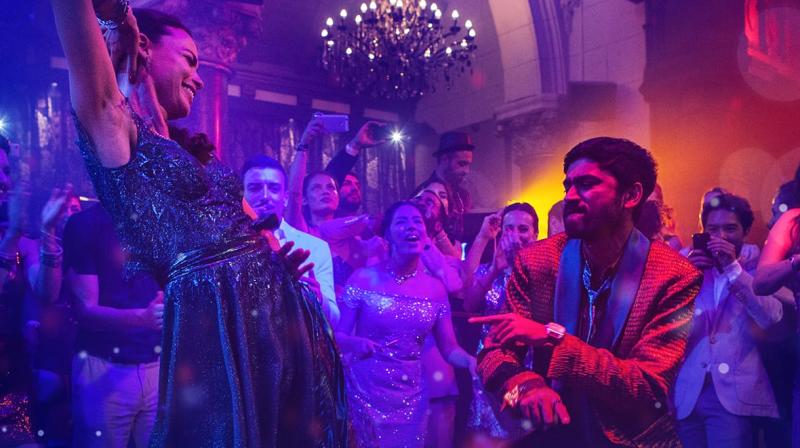 Mumbai: Madaari song from Hollywood movie, The Extraordinary Journey of the Fakir is raging hit. A peppy number, which features Dhanush dancing like there is no tomorrow, has managed to strike a chord and audience are loving to grooving to it, and have been sharing their dance videos on social media with #CrushItLikeDhanush. Seeing the response to this song, the makers have released a fun Behind the Scenes video of the song.

Bérénice Bejo who has an Academy Award nomination to her credit, and International crew of the film can be seen trying to sing the song, and the attempt at crooning the Hindi number is extremely adorable. The video also showcases some of Dhanush's dun dance moves from the number.

The  Extraordinary Journey of the Fakir is based on the book by Romain Puértolas and it revolves around an Indian street magician's journey to Paris. Finding himself in the midst of a crazy adventure he never bargained for.

The movie has been screened in many film festivals and in these, it has not just managed to get rave reviews, and awards but also managed to smash box office collections. The Extraordinary Journey of the Fakir is directed by Ken Scott and produced by Saurabh Gupta, Gulzar Inder Singh Chahal, Aditi Anand, Samir Gupta, Luc Bossi, Jaime Mateus-Tique, Gregoire Lassalle, Genevieve Lemal and Co-Produced by Abhayanand Singh and Piiyush Singh from Golden ratio who are also presenting the film and set to release on June 21.