As Hanks appeared on the screen for the opening monologue, a round of recorded applause, cheers and whistles played out 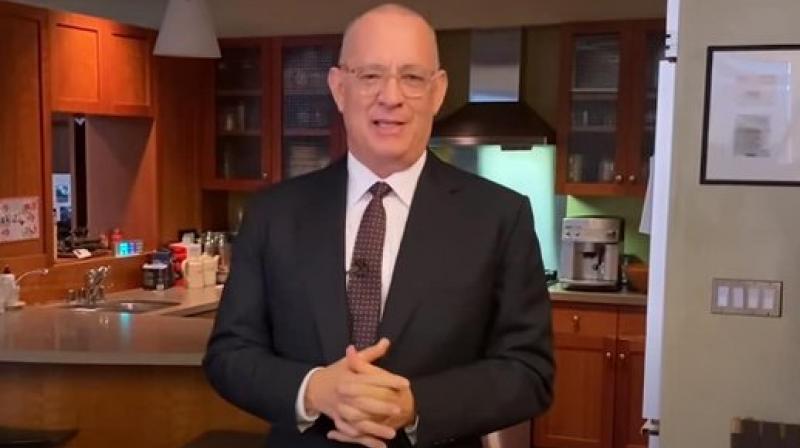 Veteran star Tom Hanks, who was diagnosed with coronavirus in March, presented the first-ever experimental "Saturday Night Live At Home" special, in which he addressed why his diagnosis had made him feel like an "American dad" while he was indoors.

As Hanks appeared on the screen for the opening monologue, a round of recorded applause, cheers and whistles played out, for which the actor thanked the show's engineers.

"It's good to be here, though it is weird to be here hosting 'SNL' from home. It is a strange time to be funny. Trying to be funny is 'SNL''s whole thing, so we thought what the heck? Let's give it a shot," the actor said, standing in his kitchen.

The Oscar winner then explained why he was chosen for the hosting duties for the first work-from-home "SNL" episode, which aired on April 11.

"I have been the celebrity canary in the coal mine for the coronavirus. And ever since being diagnosed, I have been like America's dads like never before -- since no one wants to be around me anymore and I make people uncomfortable," he quipped.

The actor, along with wife, singer-songwriter Rita Wilson, was diagnosed with the coronavirus on March 11 while they were in Australia for work.

The couple spent a week in isolation at a hospital in the state of Queensland in Australia.

After their discharge from the medical facility, Hanks and Wilson, 63, continued to self-quarantine at a rented home in Australia and returned to the US on March 28.

In his monologue, the actor praised the people in Australia for being "fantastic".

"But they take your temperature in Celsius instead of Fahrenheit. They say, 'You're 36', which seemed pretty bad to me. But turns out 36 is fine. But 38 is bad, so basically it's how Hollywood treats female actors," Hanks said.

The actor then said they were doing fine now.

"My wife and I are doing fine, we're hunkered down like all this should be. This is the first time he'd worn suit since March 11. I had only been wearing sweatpants... There's no such thing as Saturdays anymore. It's just today," he added.

Hanks explained the whole show had been filmed by the castmates in quarantine.

"It'll be different and weird but it will make you laugh like 'SNL' does," he promised.

He then mimicked the "question and answer" format of a typical host monologue and fielded questions from himself in costumes.

"Stay safe," Hanks said at the end of his monologue, thanking healthcare workers, delivery workers, grocery workers and the frontline responders amid the COVID-19 outbreak.

Kenan Thompson, at the top of the show as the cast appeared in the format of a Zoom video call, said, "It's beautiful to see all my castmates."

"It's sometime between March and August," Kate McKinnon joked.

The usual introduction was played, which featured clips of the band playing remotely along with the footage of the cast doing different things at their own homes.