The trailer picks up from where 2015's 'Star Wars: The Force Awakens' left off, with Rey, lightsaber in hand. 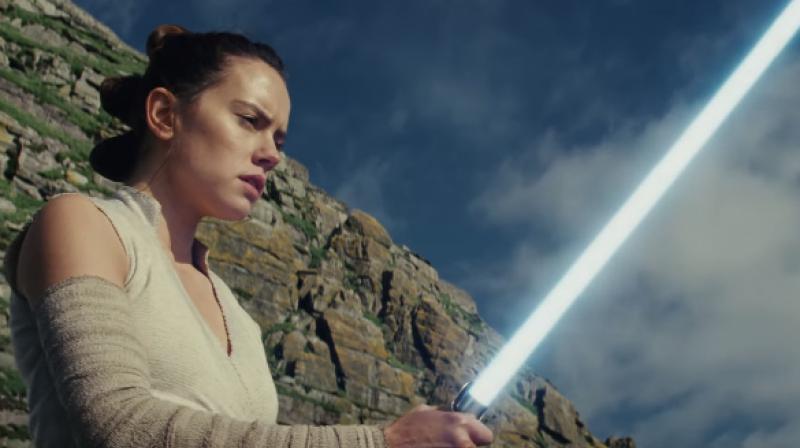 A still from 'Star Wars: The Last Jedi' trailer.

New Delhi: 'Star Wars', rejoice! The trailer for Episode VIII, titled 'The Last Jedi,' has finally dropped in and it seems like the 'force' has been unleashed.

The makers and Lucasfilm unveiled the trailer on YouTube and it is surely going take fans on a magical ride.

The trailer picks up from where 2015's 'Star Wars: The Force Awakens' left off, with Rey, lightsaber in hand, having tracked down the reclusive Luke Skywalker (Mark Hamill) on his remote verdant Ahch-To.

Then, we see Supreme Leader Snoke declaring, "When I found you, I saw raw untamed power, and beyond that, something truly special."

While he is speaking, Kylo Ren (Adam Driver) arms himself, but on his final words, Rey ignites the Skywalker family lightsaber.

For the first time, we hear Luke Skywalker speak with the ominous words, "I've seen this raw strength only once before. It didn't scare me enough than it does now."

The footage also sees Carrie Fisher, who died at age 60 last year, looking fearful and deep in contemplation as Kylo Ren, is considering blowing up her ship.

"Let the past die, kill it, if you have to," says Ren, as he hurtles through an outer space war zone.

Kylo appears anxious as he weighs his options before placing his thumb onto the trigger.

The scene cuts back to Leia, as he stands in anticipation.

The film marks the final appearance of beloved character General Leia Organa, following the death of Carrie Fisher in December 2016.

The trailer finishes mysteriously with Rey questioning her role in the galaxy's trouble.  "I need someone to show me my place in all this," she says, as Ren extends his hand to her.

The trailer looks intense, dark and some scenes are a visual treat for the eyes.

The flick is slated to release on December 15 in the U.K.

Watch the new trailer for Star Wars: #TheLastJedi and see it in theaters December 15. Get your tickets now: https://t.co/6vE5KUSv1f pic.twitter.com/wcKvn0jjPO