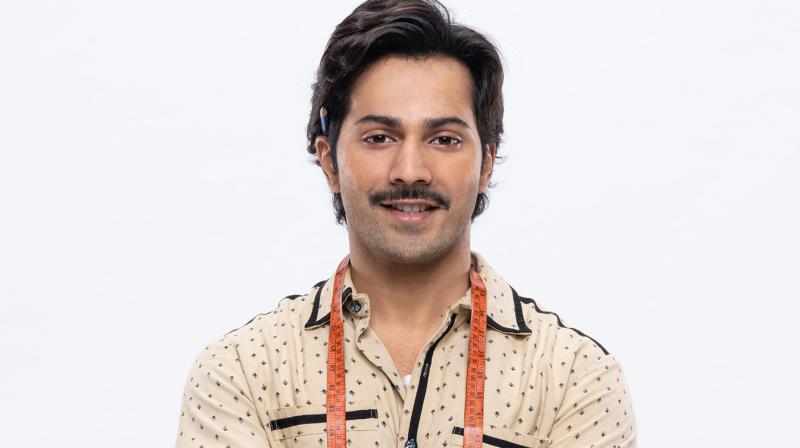 Varun Dhawan's look in Sui Dhaaga: Made In India.

Mumbai: Varun Dhawan plays the role of an innocent local tailor from heartland India, Mauji, in YRF's upcoming entertainer Sui Dhaaga – Made in India. From the time the first look of Varun was released, it was hugely lauded. Audiences praised the simplicity and authenticity and the look became a huge talking point. The costume designer, Darshan Jalan, shared the big secret behind his inspiration and it’s a really heart-warming one. No one knows that the tailor overseeing Varun’s prep and training for the film, Noor, is the real inspiration behind Mauji’s look!

Darshan said, “Mauji is from the lower middle class income strata. He is simple person who works in the city as a help/peon in a sewing machine store. Regular people on the streets became an inspiration for us, like the ittar perfume guy from the streets of Haridwar and particularly Noor, our in-house tailor who was also training Varun to perfect his art of stitching and tailoring! From a styling point of view, we ensured that Varun’s look had things that a tailor who could think left of centre would come up with. Such as, zipper on the side of the pants so that he could reduce the size of the flare to keep it from getting caught while cycling. Zipper on the trouser hem so that the ends don't tear. These intricate details I believe makes audience see something new and adds to the authenticity of the character from a small town in India.”

Sharing his experince about working on his charcter, Varun said, “Noor has been integral to Sui Dhaaga. He was my trainer for 3 months. He laid the foundation stone to me becoming Mauji. I’m indebted to him for teaching me the art of sui dhaaga and making me a believable tailor on screen. And I heard that his sense of dressing inspired my look in the film also! Everything in Sui Dhaaga is about authenticity, about being real and that’s what is making audiences love our trailer. I’m happy that my look has been well received and the credit goes to Darshan and obviously my teacher Noor, who has again left his mark over my character.”

Sui Dhaaga brings together National Award winning producer-director combo of Maneesh Sharma and Sharat Katariya after their blockbuster Dum Laga Ke Haisha. The film is a special salute to the inherent entrepreneurial spirit that the youth of India and our local artisans have.

A film about finding love and respect through self-reliance, Varun is paired opposite Anushka Sharma who plays an embroiderer in the film. Both champion actors, Varun and Anushka have been paired for the first time and are definitely the most-awaited on-screen jodis of 2018.

Sui Dhaaga - Made in India is set to release on September 28 this year, just before Gandhi Jayanti.