Former Miss Universe Sushmita Sen spoke about what motivated her to adopt her two kids, what her kids are like and her comeback to films. 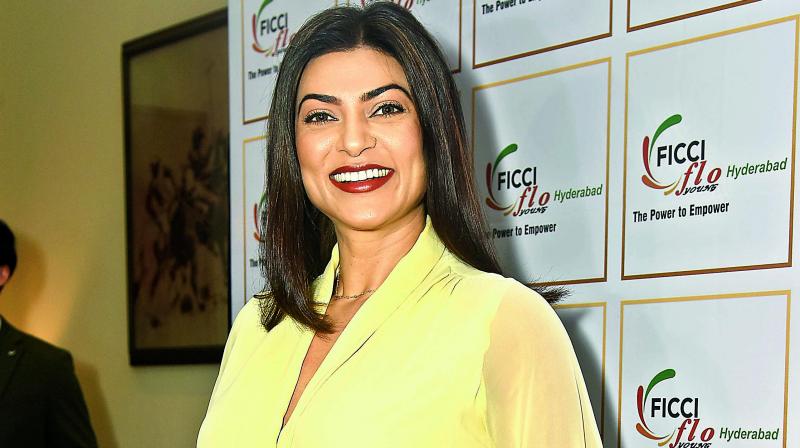 Since her debut on the world stage as Miss Universe 1994, she has always managed to grab the limelight, be it her teacher act in Main Hoon Na or the nonconformist act of adopting her kids when adoption was still not an openly discussed topic.

She’s carried her flame through the years, and was recently invited to Hyderabad by Federation of Indian Chambers of Commerce and Industry  Hyderabad to speak on Child Adoption. We caught up with the talented actress.

“I was born in Hyderabad. So for me to come here, it is always like coming home. My Amma lives here and I have a home and room in Film Nagar called Sush. This time, it’s double the rush, though, because it is an absolute privilege to be invited by FICC Hyderabad,” Sushmita tells us.

The adoption story
Taking on from the topic she was invited for, the former Miss Universe shares with us her thoughts on adoption and her motivation behind adopting her two kids. “When I was 17 and half year old, I didn’t know anything about orphanages. I was not even aware of children. When I became Miss Universe and was taken around the world, it showed the real picture of the world. I attended a lot of different orphanages around the world and while I was at it, I realised I had a deep connection with the children. Each time I left an orphanage, I would have some child holding my hand and expressing that they wanted to come with me,” Sushmita narrates. Overcome by the despair of not being able to do anything beyond visiting and spending time in orphanages Sushmita decided she needed to do more. “What was the point in doing all that I was doing when I couldn’t even tell those kids, ‘Okay come with me?’ So at 19, I spoke with my father about adopting a child. He didn’t think I could handle a child when I was all of 19 years myself and thought that I had positively lost it,” recalls Sushmita.

Born in her heart
But what she began when she was 19 years old, she succeeded at when she was 24 years old. “Today, at 43, I am a mother of two beautiful girls. My elder one Renee is 20 years old and the younger girl Alisha is 10,” says Sushmita, her mother’s pride beaming within. Adoption is a life changing decision for anyone. And it is no different for Sushmita. “Adoption is a life changing decision. It’s to birth from the heart. I have been privileged to be mother not once, but twice. And I haven’t missed the joy of motherhood through a single day. When I adopted these kids, they didn’t choose me-I chose them. But now after 20 years, when they have the choice, they are choosing me and I think that is so beautiful,” says the actress.

The actor’s lineage
Talking of her kids lights her up. She reveals that the elder daughter Renee wants to be an actress. “Yes, but I have told her that she can pursue a career in acting after she completes her graduation. If she doesn’t complete, then it’s a ‘no’ from my side,” says Sushmita, adding that her younger daughter, Alisha is not interested in acting. But it’s been a long sabbatical, we tell her. Does she plan to come back to the silver screen, we ask her. “Yes, it’s a long break and I am coming back to films and the announcement will come soon,” says Sushmita, signing off.